At their March 4 regular meeting, all board members were present as they worked through a number of agenda items.

East Grand Fire Protection District #4 Chief Todd Holzwarth appeared to request approval of new Impact Fees. Conducted every five years, as per the Intergovernmental Agreement (IGA) with the town, the Impact Fee Nexus Study was prepared by Denver-based firm, Economic & Planning Systems, Inc. (EPS). The study recommended the fees change from $483 per residential housing unit to $632; and non-residential fees would go from $0.268 to $0.28 per square foot (sf).

The Town had received one letter, from developer Clark Lipscomb of Cornerstone Holdings. Town Clerk Antoinette McVeigh read the letter into the record. In his letter, Lipscomb expressed concern with the increases proposed, citing they contributed to the lack of affordability in new construction and can have dire implications for price-sensitive projects.

Impact Fees are paid on all new construction. The one-time fee collected is used solely for capital equipment and improvements by the Fire District.

Trustee Andy Miller asked, “Is there any thought of using a square foot (instead of flat rate) measurement for residential?”

Holzwarth explained the residential fee is set up to collect on a per unit basis, whether a ‘mcmansion’ or small condo. He added that the Town (who collect the fees during the Building Permit process) had the option to waive fees for affordable/attainable housing projects.

The trustees determined they needed a more thorough review of the Nexus Study and continued the hearing to the next meeting on March 18th.

The trustees next discussed creation of the Fraser Housing Authority (FHA). Modeling documents utilized by other towns, staff created Resolution 2020-03-01, creating the FHA, Bylaws and a Certificate of the Creation of the FHA. They had also secured the required minimum of 25 signatures on a petition needed to form the FHA.

Town Manager Jeff Durbin had requested the town’s attorney, Rod McGowan, review the documents. Prior to that night’s meeting, McGowan suggested language be revised as it pertained to the governing body. Changes had not yet been made to the Board packet. “Keeping politics out was the goal,” said Durbin. He confirmed the intent was to have members of The Town’s Economic Development Advisory Committee (EDAC) serve as the governing body, making recommendations to the Board.

The hearing was continued to the next meeting to allow for revisions to be made. 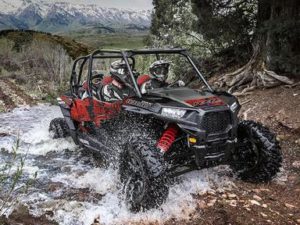 Ordinance 477, an ordinance amending Chapter 8 of the Town’s Code establishing regulations to authorize operation of UTVs on Town streets and alleys next came before the trustees for approval.

“It’s pretty straightforward, we tried to keep it simple,” said Durbin. The work had been done based on direction received at the last meeting. “If it looks and acts like a car, it is subject to the same rules as a motor vehicle.”

Trustee Ryan Barwick, owner of Grand Adventures, commented on the measurement standards included in the language. While not the norm, some UTVs in the available market could exceed the width or weight specified in the Ordinance. “I don’t know if you want to be in the measuring game,” he cautioned.

Police Chief Glen Trainor said he’d used language from the state of Wisconsin’s requirements when contributing wording to the documents. “I don’t know that we really need that,” he said.

The regulations defined that authorized UTVs must have a steering wheel, a tail light, brake light, two headlights and side reflectors, foot pedals for braking and acceleration, seat belts for each occupant, a horn or other audible warning device, rear-view mirror and a roll bar.

The definition excludes vehicles such as snowmobiles, golf carts, ATVs (those you can straddle) and any vehicles with tracks, skis or skids.

Additionally, vehicles will have to be currently registered with CPW, operated by a licensed driver and possess liability insurance. Passengers under the age of 16 must wear helmets.

The trustees approved Ordinance 477, with language regarding width and weight restrictions removed, unanimously.

Durbin said the town attorneys for the towns of Fraser and Winter Park, Rod McGowan and Kendra Carberry, had worked closely on the language, much of which was taken from the Town of Vail’s InDeed Program. “I want to give credit to Vail. I think we are in good shape,” he said, adding, ”this has gone out to four financial institutions interested in working with us.” Durbin also noted, “We are going to see some evolution over time. Ultimately, you will start seeing these in completed form with recommendations for approval,” said Durbin.

Trustee Katie Soles said she had suggestions for revisions which included defining the referenced ‘upper Fraser Valley’ boundary and crafting a scale to weight applications, based on factors to be determined. “In terms of who can live in the dwelling: there’s people that live in Fraser, work in Hot Sulphur Springs or Grand Lake. Do we say ‘work in Grand County’?”, she asked.

Trustee Barwick said, “The goal is to house the local workforce.”

Mayor Philip Vandernail said, “I think this should be focused on the local workforce.”

“Our last conversation was to focus on the valley,” said Barwick.

“They are two separate things,” said Soles. “Who the people are living in the home and where they are working.” She pointed out these were factors that could be weighted in the application process.

Soles also questioned what happens when someone who initially qualified for the program drops below the 30 hour/week threshold, retires, becomes disabled or changes job location. “People should be allowed to stay in their own home.”

Durbin suggested, “Maybe start small. Start with the property and job needs to be in Fraser and see how it goes. It is easy to start small and grow bigger.”

“These are long term things,” said Miller. “We have got to grab the houses when they are available.”

“I agree we should start smaller,” said Barwick, adding, “live & work in Fraser is too restrictive. If   someone gets a better job in Granby, they shouldn’t be punished. At the moment, it should be Winter Park and Fraser – I think you have to do the valley.”

Durbin told the trustees that Winter Park was still working on their program. Their plan is for properties located within Winter Park town limits and employment is still to be defined, but could be Winter Park, Fraser and extend as far as Tabernash. “You could set this up as the job and property in the Fraser Valley,” said Durbin. Each application could involve an element of negotiation and EDAC will work with direction provided by the trustees.

“No matter what, they’ll be coming home to Fraser,” said Soles. “There is still that benefit.”

Acknowledging there are still many details to work out, the trustees agreed to have a workshop with the EDAC to talk through them, likely after the members are reappointed in April.

Fraser Board of Trustee meetings are held the first and third Wednesday of each month at 6 pm and are open to the public. To learn more, visit frasercolorado.com.