The Fraser Board of Trustees held a Special Meeting on July 7 to discuss Ordinance 479, an Emergency Ordinance requiring Face Coverings during the COVID-19 Public Health Emergency. At the Board’s request at their July 1 meeting, staff had drafted the ordinance in support of local businesses and for public safety.

The Board unanimously approved the Ordinance, with several changes to the draft language to clarify when the Emergency has passed and expanded the exceptions to include those seated at beverage and dining establishments and indoor businesses/meeting rooms where social distancing is provided and while seated. 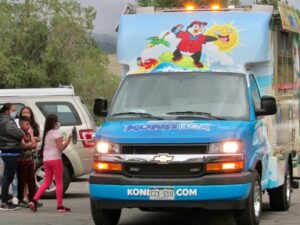 At their meeting on July 15, the trustees reviewed a request from Karl Vogelbacher, owner of the local Kona Ice franchise, Kona Ice of Peaks & Valleys. Vogelbacher had submitted an application to provide curbside delivery of pre-ordered and onsite shaved ice across the Town of Fraser, set up at Town Parks, fishing ponds and in front of local businesses, with written approval from business owners.

Vogelbacher explained the business to be self-contained, within the truck, and some activity would include travel through local neighborhoods in the old-fashioned “ice cream truck” style.

Given the assessment rate for commercial properties is set at 29%, the General Assembly must set the residential assessment rate (the “RAR”) every odd year in order to maintain the 45%/55% allocation between residential and commercial taxes mandated by Gallagher. In 1982, the RAR was at 21%, but due to significant growth in the residential real estate market in the last forty years, the RAR has decreased significantly over time, and the RAR was most recently set at 7.15% in 2019.

The Town of Fraser is only able to control one of these factors, the mill levy, but, even control of this factor is limited by Art. X, Section 20 of the Colorado Constitution (“TABOR”).

2021 Reassessment: As required by Gallagher, the General Assembly will again set the RAR in 2021. As is traditionally the case, several weeks ago, the State Property Tax Administrator released an estimate of the RAR for 2021. Given the robust residential real estate market over the last two years, it is currently estimated the 2021 RAR will be set 5.88%, an 18% decrease from the RAR set in 2019. It is estimated this decrease in the RAR would result in a $50,000 decrease in Town revenues.

Statewide Ballot Question: Over the last several years many special districts, including special districts in the Fraser Valley, whose budgets are disproportionately dependent on property tax revenues have asked voters for permission to “de-Gallagherize.” That is, they have asked for permission for their mill levies to fluctuate so that the effective RAR is 7.15%, no matter the level at which the General Assembly sets the RAR pursuant to Gallagher.

Taking note of this trend, a significant number of lawmakers, business leaders and community members from both sides of the political aisle have come to the conclusion that Gallagher has outlived its usefulness. As such, the General Assembly voted to refer a ballot question to the voters in November 2020 asking to repeal Gallagher. Were the repeal to occur, the state would then be able to set assessment rates for both residential and commercial properties at any level they deemed fit in the future.

Proposed Town Ballot Question: The 2021 RAR presents a significant challenge to the Town under current law. The outcome of the statewide ballot question is murky at best, so relief from Gallagher is not guaranteed. As such, the Town could follow the lead of other special districts, and ask Fraser residents to essentially freeze the RAR at its current level of 7.15%, which would require a ballot question be placed before voters at the November 2020 election.

Upon conclusion of Wisor’s presentation, the board directed Wisor to continue to work with the Grand County Attorney on the ballot language and bring it back to the next meeting.

Repeal and Reenactment of Motor Vehicle and Traffic Code

At the August 5 meeting, Fraser Winter Park Police Chief Glen Trainor presented Ordinance 480, an ordinance designed to update the Town’s Motor Vehicle and Traffic Codes to align with the State of Colorado’s Code. Trainor explained the changes would ease and simplify the department’s administrative management of the code. The trustees approved Ordinance 480 unanimously.

Town Manager Jeff Durbin presented a Memo from Paul Wisor, which included suggested Ballot Language crafted in consultation with the Grand County Attorney. Durbin told the trustees they did not need to approve the language that evening, indicating Town Clerk Antoinette McVeigh would need to work on an IGA with the county to conduct the election.

“If the ballot question passes at the statewide level, this will be irrelevant,” said Trustee Ryan Barwick. Durbin confirmed the observation was correct.

“I think we should move forward,” said Trustee Katie Soles.

The board approved moving forward with the de-Gallagher ballot question.

During the meeting, the trustees approved a letter of support to District Ranger Shoshana Cooper for a Land Exchange proposal between Grand Valley Ranches and the US Forest Service.

The letter read, “While we understand that the public review process has not been initiated, we felt it important to share our support for consideration of this proposal. The private lands above Devil’s Thumb Ranch have significant recreational and environmental values which should be preserved. Federal ownership of these lands would protect public values and make available to the community a wide range of beneficial activities including hunting, fishing, biking, and cross-country skiing. The exceptional wildlife, wetland, fen values would also be better protected in federal ownership.

It is also noted that the lands to be exchanged to Grand County Ranches are squarely in the development path and are a logical place for future growth to occur. While such development may occur sometime into the future, it makes sense to include this area in future growth scenarios for the Town of Winter Park and Grand County. Based on our discussion, it is our understanding that public trails that are proposed for Roam and Rendezvous may be extended up into the 540-acre parcel which would provide additional open space and recreation benefits for the community. Having additional public trails and open space would provide significant benefits to the community.”

Fraser Board of Trustee meetings are held the first and third Wednesday of each month at 6 pm at Town Hall. The meetings are open to the public. To learn more, visit frasercolorado.com.