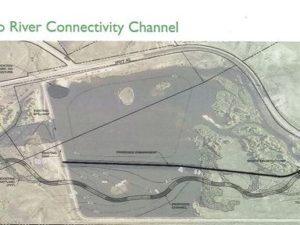 TU Legal Counsel, Mely Whiting, addressed the Board. Whiting said, “I have been working at the Colorado river headwaters for TU since 2006. I am quite familiar with the problems we have. One of the biggest problems is Windy Gap reservoir. It is an ‘on channel reservoir’, meaning the river runs in and out. It blocks aquatic organism passage completely and prevents sediment from moving around. Since the 1980s when it was built, we have found that we have lost about 38% of micro invertebrates and all of the native sculpin.” Whiting said TU had reached an agreement with Northern Water to fix the reservoir and they engaged engineering firm, Tetra Tech, to come up with the best alternative for a solution. As a result, the project will reduce the size of the reservoir by constructing a berm on the south side which allows for a connectivity channel, a natural channel that will connect the river. “We are basically reconnecting the Colorado river upstream and downstream,” said Whiting.

When completed, the connectivity channel will be open to the public, adding about another mile of fishing for anglers.

Whiting continued, “As we were looking at fish, we identified the Granby diversion structure as a barrier for fish passage. Once identified, we contacted the Town. They got together with staff and brought in Fish & Wildlife, CPW and Grand County. Fish & Wildlife gave us a grant for surveying and permitting which got us going.”

TU selected Corey Engen and Clint Packo of River Engineering firm, Flywater, as consultants. Part of the process included significant comments and input from CPW and Fish & Wildlife. “They’re the experts. That’s all been pretty much completed,” said Whiting.

To help fund the project, TU received a $200K grant from the Colorado Water Conservation Board, and $130K in rocks, materials and transportation from Northern Water.

Corey Engen presented an overview of the project describing the goal as to provide passage for trout and native species and accommodate non-motorized boating recreation without interfering with water diversion for municipal and irrigation uses. 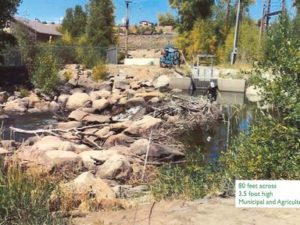 The project will take place just west of the US 40 bridge, downstream of the town’s water intake diversion. The design will add materials that mimic the river and allow for fish and boat passage at both high water and low water levels. Material and rock placement will angle downstream, at a slightly steeper grade in places. Much of the wood and debris will be removed from the existing diversion to stabilize and reset the structure. It will also provide for resilience during future flood events, facilitate sediment transport and other natural stream processes and have no impact on the 100-year flood plain.

With permitting complete, the next step is to put the project out to bid. Costs are estimated at about $296K and Whiting confirmed she had acquired the funds to bridge the gap in costs. Once a contractor is selected, construction would begin in the low flow season, after Labor Day, and completed by no later than November 1, so as not to affect fish spawning.

Mayor Paul Chavoustie said, “I hope you will be communicating with the landowners downstream.”

Engen confirmed there would be extensive communication. “You’ll definitely have disturbance downriver,” he said, adding, “there may be some sedimentation where the river goes off-color.”

Mayor Pro-Tem Deb Shaw stated, “The landowners will be contacted.”

Whiting said the project includes a communication plan and they would include the communication requirements in the RFP. She said she was about halfway through drafting the agreement between the Town and TU that would provide for the sub-award passage of funds and would get it to the town soon.

“I think it’s a great project. It will greatly help the Fraser river. I am excited to see the dams fixed,” said Mayor Chavoustie, adding, “This could add some consistency to fishing – sometimes it’s good, sometimes it’s not. It will have a forever impact on that river.”

“Thanks for the hard work and the foresight,” said Trustee Becky Johnson.

Town Attorney Scott Krob presented Ordinance 928, the Improvements Agreement between the Town and Granby Station LLC. Included in the agreement is a vacation of the westerly ten feet of Fourth Street adjacent to the property.

As part of the Improvements Agreement, the developer agrees to make improvements to the Town’s property. They will:

The town will also retain a perpetual, non-exclusive easement over, across, upon and under the property for continued use, repair, replacement and maintenance of existing utilities.

Trustee Nick Raible asked Krob, “Is there any reason not to approve this?”

Krob said he saw no reason not to approve the Improvements Agreement, including the property vacation.

Chavoustie said the land located past the end of Fourth Street is railroad property and they would not allow improvements to the unofficial path to the Amtrak station. He added that developer negotiations with the railroad for continued use of the driveway the previous property owner had used to access storage units resulted in a proposal for a $5,000/year lease, with a 3% increase per year. “The railroad will not budge on the walking path,” he added.

Trustee Johnson motioned to approve Ordinance 928 and it was unanimously approved. Trustee Cathy Tindle was absent from the meeting.

Attorney Krob next presented Ordinance 929, explaining that an issue had been brought forward by staff to clarify timeshare permitting. “This makes that abundantly clear,” said Krob.

Clarification applies to Section 5.20.060(a)(2) of the Town Code. The current language states, “A separate short-term rental permit is required for each rental unit. Time-share units will be treated as one unit.” The amended language adds, “Each individual, physical time-share unit, though it may have multiple owners, will be considered as a single unit and will be required to pay the one time permit application fee provided for in Section 5.20.050(b) and the annual permit fee provided for in section 5.20.050(b) in order to be used as a short-term rental.”

In essence, each timeshare unit pays one application fee and one annual permit fee, regardless of the number of owners who choose to rent the unit on a short-term basis.

Granby Board of Trustees meetings are held the second and fourth Tuesday of the month at 6 pm and are open to the public. To learn more, visit townofgranby.com.