The final meeting of the year brought a very full agenda to Granby’s Board of Trustees on December 10. Following an executive session to receive legal advice from the town attorney on Granby Ranch roads and for personnel matters related to the town manager selection, the trustees announced they had extended an offer to a town manager candidate. Further information would be shared following acceptance of the Town’s offer. 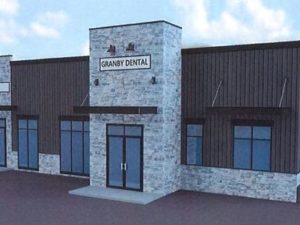 Andrew Burns DDS purchased the lot located at 1 Agate Avenue, at the corner of Zero Street and Agate. Previously occupied by Mountain Valley Auto & Truck Repair, Dr. Burns has done quite a bit of clean-up on the property.

The town had scheduled a workshop to allow Dr. Burns to give an update on the property and to present a proposal for a new fence and outdoor lighting for consideration under the town’s Downtown Infill Incentive Program.

Renewed annually, Mayor Paul Chavoustie encouraged the trustees to consider renewing the Downtown Infill Incentive Program for 2020. If the program is renewed, Dr. Burns would have to apply for the funding and appear before the board for approval.

Dr. Burns told the trustees he plans to break ground on a new building for his dental practice around the first of May, weather permitting.

Nancy Franz told the trustees she was there to relay her annual ‘thank you for contributing’ message. The change in hours from 9 am – 1 pm to 9 am – noon had little impact on participants of the Saturday recycling drop-off at the Country Ace parking lot. “We are doing very well, going into our 8th year,” said Franz, adding, “thank you for the money you give us every month. I am hoping I am in your budget for next year.”

Trustee Becky Johnson asked Franz if the amount the town contributed was adequate. Franz confirmed the Town’s $400/month contribution was sufficient. “We have a little extra. Not much, but we make it.” She added that Waste Management gives them a good deal, and Ace donates the space on their property to store the recycling containers. “It allows us to keep it going.”

Trustee Natascha O’Flaherty asked where the recycling was taken and asked whether it was truly recycled. Franz told her it went to the facility located at 58th & Franklin in Denver. “What’s killing everything is plastic,” she explained. Contamination of plastics such as silverware and straws is what has caused countries like China to discontinue accepting recycling from the US. “We are trying to clean it up. It still goes down to the plant on Franklin for now.”

Public Works Director Joel Moore presented bids for a replacement excavator and new loader to the trustees for consideration. Moore told them he hoped to lock in 2019 pricing by obtaining approval at the meeting.

Moore recommended accepting the bids from Bobcat of the Rockies for the Bobcat E85 excavator, at $71,727 with a trade-in, and Honnen Equipment for a John Deere 624L at $209,989.

Because the two quotes were below budget, Moore requested a pusher (an attachment for the loader), at $6,400 also be approved.

The trustees approved the purchases unanimously. Trustee O’Flaherty abstained from the vote due to a conflict.

The trustees told Marquardt they wanted a Granby Ranch resident to be added to the board next, since there are currently none. In a 4-3 vote, the trustees tabled the appointment until the ROSH board is able to find interested Granby Ranch candidates.

Mayor Paul Chavoustie stated, “This is a high level discussion. We have no set plan in place.” He went on to say, “Our biggest reason is to try to calm traffic. Traffic studies show that 6th street is near failing and 4th Street is not. I think 4th street is better (for placement of a traffic signal), but CDOT doesn’t agree. These are preliminary discussions.” He told attendees before any decisions are made, the Town will host Workshops to seek community input.

Dan Cokley, with SGM Engineering, said he had looked at 4th Street and 6th Street and reviewed a study that had been conducted in 2006. He had also spoken with Tim Gagnon who would present the results of a study, which looked at different lane configurations. “I would preface this as preliminary,” said Cokley.

The study showed several alternatives, including realigning/re-routing CR 60, adding a median that would prohibit southbound left turns or a possible roundabout.

Richard and Connie Nelson, who own property at the end of CR 60 told the trustees they had attended the meetings in 2006. “It got nixed pretty fast,” said Richard. He said the solutions presented did not solve the problem in turning left. He also pointed out that Jasper Court (a possible alternate route) is an alley. “All houses face CR 60 or the alley. It was not designed to be a throughway, nor designed to be two-way.” The Nelsons asked to be included in invites “to see what may be coming and have a voice in the decision making.” Connie added, “All 3 plans take a piece of our property. There is no 100% solution to this problem.”

Mayor Chavoustie observed, “It would have been solved years ago if it was.” In closing the discussion, he said, “We’ll have more conversations. Thank you.” He asked Cokley to circle back and talk about options and the results of the traffic study.

Colorado Headwaters Land Trust (CHLT) Executive Director Jeremy Krones presented a reappraisal of 739 acres of town-owned land in Granby Trails Highlands which the town intends to dedicate as a conservation easement in perpetuity. According to the appraisal conducted by Nash-Johnson Associates, the property is valued at $4.2 million.

Krones explained that CHLT works on a 50% donation basis. $2.1 million would be donated by the Town and CHLT would raise the rest. He said he believed that GOCO and County Open Lands, Rivers and Trails funds could satisfy the necessary funding requirement.

“There is a tax credit program,” said Krones. “I am not up to speed on government entities.” He offered that CHLT’s tax consultant will be coming up from Denver on January 13 to attend the Mayors and Managers meeting and could potentially conduct a workshop for the trustees prior to their January 14 meeting.

Mayor Chavoustie said, “Conceptually, we would get $2.1 million in cash and another $2.1 million in tax credits, sold at eighty cents on the dollar. Other things will come up in the future and the town will have to come up with the funds. We will have the ability to fund those projects. This is very beneficial and, it gets conserved forever.” He added, “That parcel is zoned R2 and could add another 4,000 units. We would like to get this easement done in 2020.”

In other town matters:

Town of Granby meetings are held the second and fourth Tuesdays of each month and are open to the public. To learn more, visit townofgranby.com.