At the May 28th meeting, the first item on the agenda was Ordinance 912, approving a minor subdivision at 21 Ten Mile Drive. Owner Jack Gerstein told the trustees he had separated the building into three separate spaces, to help with selling or leasing the spaces. Currently, Sherwin Williams has leased one of the spaces and Gerstein told the trustees he was focused on attracting trade-related or maintenance companies to fill the remaining two vacancies.

Town Manager Aaron Blair told the trustees, “There is no downside. This will help him move these spaces a little quicker”.

Mayor Paul Chavoustie added, “When a contractor buys in, it assures a long term commitment.”

Trustee Natascha O’Flaherty asked whether the HOA had already been approved. Manager Blair told her it would be a traditional acceptance. “The Mayor won’t sign until all conditions are met,” said Blair.

Manager Blair opened by giving background on the process the trustees had undertaken to get to this point. He explained that they had done a number of workshops (5 work sessions), taken input received and combined the previous 2 options presented, which are ready to be presented as an Ordinance at a future meeting.

Trustee Becky Johnson stated, “I think it’s a great place to start. We can always tweak it.”

Trustee O’Flaherty requested that, under the Rules and regulation section, #11 be removed. “It is subjective and opens a pandora’s box. I would like to keep the number (of occupants) fixed”. She noted that most short-term rentals (STR) are renting out at 2 per bedroom, plus 2. She also told the trustees she had concerns with zoning. “My concern remains, if we don’t separate tourist zones in town, what will the town look like 20 years from now? Everytime a unit goes on short-term rental, it removes a home from a local family’s reach. We need to  give a little more thought on what we would like and consider limiting the number of permits in town.”

Trustee Johnson stated, “I have a hard time telling a homeowner where they need to buy.”

Mayor Chavoustie added, “People are buying second homes with the option to rent short-term. They might never consider renting it out long-term”.

Trustee Deb Shaw said, “We can tweak it. We have put a lot of time into this”.

“It is very hard to take away once we give it,” cautioned Trustee O’Flaherty.

Mayor Chavoustie reminded the trustees that both Smith Creek Crossing and the Rodeo apartments will offer affordable housing for the locals.

Trustee O’Flaherty maintained, “I think the rules should be clear. Exceptions eluded to in number 11 make it not so clear”.

Mayor Chavoustie said, “I am fine with removing 11”.

Trustee Johnson suggested, “Let’s remove it and put it on a shelf for now”.

During Public Comment, Silver Sage resident, Christian Hornbaker, told the trustees, “I commend this group for actually doing something. Thank you for starting the ball rolling”. Hornbaker told them about an HOA in Grand Lake that is putting language in their regulations to prohibit rental in the first 2-3 years of purchase. “I think that’s a great way to reduce the number of short-term rentals”, which ultimately helps solve the housing issues of today.

Second homeowners, Dwight and Connie Briggs asked about the exemption for multi-unit condo complexes with on-site management. “We are at Mountainside – how do you envision properties exempted from having a permit that are assumed to not be in compliance? How would a renter know they are in compliance? Not all owners in Mountainside use Resort Management Group (RMG), so how do we enforce regulations if we exempt them when 20% of the units are not managed by RMG?”

Town Manager Blair told them that on-site management 24/7 is what protects the property. “We know it is taken care of right away.”

Trustee O’Flaherty commented, “There are safety concerns with occupancy. It concerns me when there is a crib in a closet.”

Manager Blair told them he would get clarification on what RMG manages at Mountainside and report back. 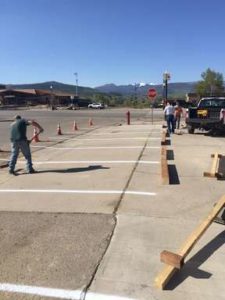 Manager Blair told the trustees the right of ways had been surveyed between Agate and Jasper and the plans were to start working adjacent to new businesses and projects. He told them they were starting on 4th and 5th streets to support parking for Azteca, Pearl Dragon and the Granby Garage. The projects include construction of sidewalks and curbs and striping parking spaces. On 4th street, the striping will be diagonal and a pedestrian crossing will be placed across 4th street adjacent to the new Pearl Dragon location. On 5th street, the parking will be straight in, allowing drivers to pull in from either direction. The projects will help increase pedestrian safety and add parking to the downtown district. Manager Blair acknowledged that it will be a bit more time consuming for plowing in winter.

Trustee O’Flaherty asked, since the alleys are 10’ wide, “Can we address direction on alleys? If we could incorporate this in next phase, it would make sense”.

Manager Blair said, “If you’re liking what you’re seeing, we can get this going”. The trustees told Blair they were in support. Since the project had already been budgeted, they directed him to go ahead.

Following a heated discussion at the May 14th meeting, which resulted in continuation, attorney Jeff Culbertson delivered a message of compromise to the trustees on behalf of owner, Ken Evans, who was not able to attend because his flight had been delayed.

Culbertson first referenced the hours applicable to a Conditional Use Permit approved by the County, which are from 7 am – 7 pm every day, except Sunday. “We thought it would be reasonable to go from 7 am – 5:30 pm Mondays through Friday and on Saturday, from 8-noon.” Culbertson added, “The hours apply to extraction, crushing, stacking and sale of gravel within those hours”. He indicated they would advise the town manager if there was a need to go beyond the hours stated.

Trustee Nick Raible stated, “My issue is dust – what kind of dust mitigation is done?”

Culbertson replied that the water truck had been run the previous Friday, and that Evans had “some sort of solution” (magnesium chloride?) delivered to tamp down the dust. ”Dust control is important and is regulated by the state.”

Trustee Johnson said, “I have concern we are being too restrictive taking away from the business. We are supposed to help the businesses succeed. We aren’t restricting other businesses in town.” She reminded the trustees that the town also now has a gravel pit, “Are we going to restrict our own operation?”, she asked. “Nothing can be seen from Hwy 34, which is a designated scenic byway,” she said, adding, “You can see Legacy gravel pit from 40 at City Market and through town”.

Mayor Chavoustie replied, “the Conditional Use Permit is for mining and extraction – no crushing is done on town’s pit. The state has restrictions on mining that don’t match ours”.

Trustee O’Flaherty stated, “I agree. Here’s a gravel pit that we want to be sure all parties are good neighbors. Granby Ranch has the same hours. We have to be consistent and respect those hours. The neighbors want to enjoy their property. Hours is a meaningful concession that aligns all gravel pits.”

Trustee Raible noted, “7-5:30 is a great concession. It is good to see additional materials brought in to mitigate dust. It makes perfect sense to give notification when they are going later.”

Culbertson stated the operation “would continue to work on site ‘turning screws’ later. We would use our property to play cards, for dust suppression, doing the books, putting stuff away. Nothing noise-generating, unless the town manager is advised”. He added, “It’s our property, if we are not making noise, we would like the ability to utilize it”. He indicated there may be future berming on lot 5, down from the Hahn property.

During Public comment, adjacent homeowner, Bill Spurlin told the trustees, “I appreciate the reduced hours. I can’t speak for all neighbors, but we appreciate it. My concern is with lot 5 and a berm coming further east”.

William Hansen, Tract 2 homeowner, said, “Thank you for the hours. One concern is monitoring of the wells.” Hansen said he would like to see more monitoring of wells. As for the berm, he stated it is on lot 4, not on lot 5, as Culbertson had mentioned. He said that before the gravel pit was annexed and was county maintained, they received quarterly well monitoring reports. “We could see what the water tables looked like. If they keep going into lot 5, it can affect the water table. It should be monitored quarterly”, giving assurance of safe drinking water.

Homeowner Sharon Spurlin said, “Thank you. We do appreciate the hours. My only concern is that most gravel pit operations means everything. We are redefining that and I want to make sure you understand ‘no noise’. If they did violate, it wasn’t enforceable. I want to make sure the rules are well defined.” Sharon added, “On the berms, part of the dust was from when they created the berms on lots 4 and 5, they didn’t seed it, and the state says you need to seed it. The state regulates this. We don’t like taking pictures and they don’t matter anyway. If it happens and we can call and somebody can go look, I don’t think it’ll be an issue. I want to be agreeable. As much as they have a right to make money on their property, we have a right to enjoy our property.”

Business owner, Cody Docheff, said “This is very sad. You make a lot of good points, but you’re cutting the hours. How many months does the pit operate? Just like working people, you’re going to cut their wages by an hour and a half a day.”

The trustees agreed it was a good compromise on hours. They noted the berm on lot 5 was not on the Conditional Use Permit the last time it was issued. While it may never happen, if they come into lot 5, they would be much closer to the neighbors. They also agreed that regular well monitoring would need to be added to the language.

Trustee O’Flaherty moved to approve the Conditional Use Permit, subject to the conditions of hours being from 7 am – 5:30 pm, Monday – Friday and from 8-noon on Saturday, advance notice be given to the town manager if/when operations go outside approved hours, that if they plan to extend to lot 5 a berm be added and notice given; and, quarterly well monitoring be performed and distributed to homeowners.  Trustee Johnson seconded the motion which was approved unanimously.