Granby Board of Trustees 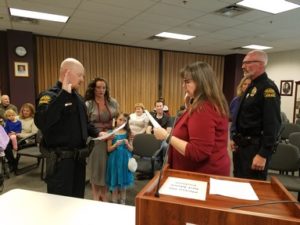 Town Clerk Deb Hess swears in Granby Police Sergeant Jeff Heitzenreiter at Tuesday night’s Board of Trustees meeting as his wife, Brandy, and daughter look on.   Photo by Casey Malon

Tuesday night’s meeting opened with a Granby Police Department promotion ceremony. Chief Jim Kraker recognized Corporal Jeff Heitzenreiter’s dedication and service to the department as an integral part of the department’s chain of command. In addition to his normal duties, Heitzenreiter serves as the department’s firearms trainer, emergency response liaison and team leader and assists with the vehicle fleet. “Jeff has taken those responsibilities and not only fulfilled, but elevated the duty,” said Chief Kraker. “We are all real proud to promote Corporal Heitzenreiter to Sergeant.”

As part of the county’s effort to inform local municipalities of the upcoming Ballot Measure 1A, which proposes a twenty year 0.02% increase in county sales tax to help fund the new Public Safety Facility in Hot Sulphur Springs, Commissioners Merrit Linke and Richard Cimino, along with Sheriff Brett Shroetlin, appeared before the board. Commissioner Cimino distributed an information sheet which had been prepared by consultants from George K. Baum to the trustees, saying, “I know you’re all dying to hear about the new jail.”

Upon receipt of the material, Town Clerk Deb Hess told the county representatives, “We are a polling place. We can’t talk about this”. The commissioners and sheriff acknowledged Hess’ point and discontinued further discussion on the subject. Had their message been delivered prior to Polling Place sign posting, it would have been allowed.

Trustee Nick Raible turned the discussion to another matter, “I am curious about your perspective on the new marijuana shop?” The commissioners explained that it was quasi-judicial and they were not able to discuss the subject.

Trustee Natascha O’Flaherty mentioned the town’s Master Plan and 3-mile plan, stating, “As we tighten that up, I would like to see a more effective plan to allow annexation.”

“Where there is no enclave, I see where a new IGA could be needed,” said O’Flaherty.

“We would be open to that,” said Linke. Recognizing that drivers don’t know where the town ends and the county starts. “It’s a good conversation for us to have in the future. In the meantime, we encourage and support annexation.”

Trustee Becky Johnson asked Chief Kraker to discuss specifics related to county dispatch fees, which are approaching $60K annually. “I want to open a discussion on how dispatch fees work between the town and county,” said Kraker, adding, “I don’t have a fix.” He explained that dispatch is budgeted through the Sheriff’s Department calls for service, property valuation and sales tax, it goes into a formula and the town’s pay a dispatch fee. Kraker pointed out the formula could tax citizens several times, since each call is tied to responding agencies. “Today, for example, we had a rollover on CR 60. We attended to it, along with the Fire department, EMS and the Sheriff. That is split and applied to the formula.” Kraker noted it was a safety issue and it increased the opportunity to look at other dispatch options. “We know we have to fund it, but I don’t think hitting small agencies for that amount is the best way.” He suggested a possible mill levy, public safety tax or other methods of funding the service.

Sheriff Shroetlin explained the formula had been developed by Fraser town manager Jeff Durbin and had been in use for about ten years. “We try to review it annually,” said Shroetlin. He added that 911 surcharges had decreased significantly due to a reduction of landlines. “We lost a lot of money when people went to cell phones.” Shroetlin offered to bring it up at the next interagency meeting on November 8th.

Clerk Hess told the trustees they had received two applications for the vacant seat. One applicant seemed highly qualified, but had only resided in the town since last December. The second applicant was a long-time resident who had submitted a letter of interest, with no information related to qualifications. Acting Planning Commission Chair, Becky Johnson, urged the trustees to fill the vacancy with the eligible candidate, regardless of qualifications. “We had four last night, barely a quorum,” she said.

The town’s Public Works manual has been an ongoing project that had been reviewed by primary staff members and was presented to the trustees in its current form Tuesday night. Town attorney Nathan Krob told the trustees that, prior to acceptance of the Ordinance, it would require a public notice and hearing.

Trustee O’Flaherty said, “I thought we agreed on road acceptance standards. I see there are no standards in place, unless I missed something?”

Town Engineer, Dan Cokley, of SGM said, “I am not sure.” He offered to look into the language.

“I like this version. It is better than what was presented in June, but it still needs clean up,” said O’Flaherty.

The trustees took no action on the document and Cokley committed to bringing it back with added road standards language as soon as possible. Since the town does not allow any road cuts after October 15, it will likely be presented in early 2020.

Finance director Sharon Spurlin and chief Kraker told the trustees that a committee of 7 had looked at two short-term rental (STR) compliance administration companies and had selected LODGINGRevs, a firm located in Durango. “A lot of the places in Grand County are using the other one (Host Compliance), but we felt this would fit our needs the best,” said Spurlin. The pricing quoted also came in at about half the cost.

The town anticipates collection of about $84K in fees from the 524 unique homes identified as STRs within the town’s jurisdiction. Spurlin said she had budgeted $7,120 for the months of November and December 2019, which include set-up costs, and $17,820 in annual expenses for administration.

Trustee O’Flaherty expressed concern with the company’s performance, noting their compliance with the state fell short in 2013 and the amount of time it took to get back into compliance. “I would like to see a strict indemnification clause in our agreement,” she said. Spurlin pointed out the contract comes from the town’s legal department to include appropriate statutory and TABOR language. She also added they would be checking references thoroughly.

The trustees approved the selection 6-1, with O’Flaherty casting a dissenting vote.

Meeting Packet to be available soon

During Committee Updates, Trustee O’Flaherty revisited the discussion of having meeting packets available to the general public. “When are the minutes and board packets going to be available online? We are a public body – why wouldn’t we want to conduct this in public? This is unacceptable,” she said.

Part of the Administrative committee function, chair Deb Shaw said she had been too busy to meet with the committee, but she and clerk Hess agreed they would begin scanning the public documents, which would be distributed to both the trustees and the public. Hess cautioned the packets would no longer include draft documents and materials related to Executive Sessions.