Cover Photo: The latest mural to spring up in Fraser on the south side of the Murdoch’s Shopping Center. The art was created by artists Eric Vandernail and Ernie Roybal     Photo by Mike Turner

At the August 15th Board of Trustees meeting, the Board approved the Consent Agenda, which consisted of the previous meeting’s minutes and Grand Park’s Elk Creek Filing 5 Final Plat.

With no public comment and little else on the agenda, the Board took advantage of the extra time with a comprehensive discussion of pending items.

The Board of Trustees discussed development of a policy outlining acceptable standards for town-sponsored events. Currently, there are no formal guidelines in place, and, as the number of events increase, the Town wants to ensure they remain family and community-friendly.

Areas of concern included band and performer (pre)screening, adopting performer standards suitable for all audiences and enforcement. The intent of the policy would be to ensure town-sponsored events reflect positively on the Town and the overall experience is a good one.

The Trustees agreed that, while being mindful of the right to freedom of speech, things like foul language and hate speech were not appropriate at town-sponsored events. Creating a policy that is enforceable would incentivize the artist to play within town standards.

The Trustees will attend their annual retreat on October 5th, and Durbin asked the Trustees for their input on what they’d like to accomplish during the session. With a number of directions the retreat could go, Durbin stated, “In the past, every retreat has been different”. They’ve covered topics on team building, change, adversity under fire, communication, governance policies, basic governance, and what others are doing.

Trustee Katie Soles said she wanted to revisit last year’s topic, Aligned influence, for a recap and review and to incorporate it into a manual as was decided during that session.

Trustee Parnell Quinn said he’d be interested in something on ‘Forward-thinking’ – how to look forward into the future when growth is imminent. “When we are at 1,000, with potential to grow to 15,000, is there something out there on this?” Quinn asked.

Other topics discussed were how to better communicate and listen to one another; more discussion about visioning on committees such as PAC and Economic Development; and, growth and capacity.

Durbin reflected that “Aligned Influence has allowed the town to grow and develop in the past few years and has played a part in the success”. He told the Trustees they had given him good direction and he would update them on the retreat agenda.

In other Fraser news… 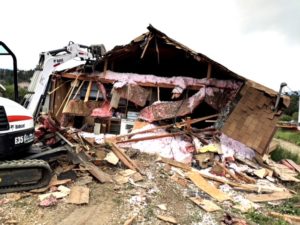 Photo courtesy of the Town of Fraser

Public Works crews demolished the town-owned property at 400 Doc Susie Avenue which had recently been used as housing for police and public works employees. The property was originally purchased for the purpose of being demolished to make way for access to future development, creating a connection between Clayton Court and Doc Susie Avenue and providing space for much needed snow storage.

Over the years, the building became increasingly in need of major repairs, and so, as it was currently vacant, this seemed a perfect time to remove it. The Town took bids from a private contractor earlier in the year to demolish the property, but rejected the one bid it received as it was over budget. With-in two days after starting the demolition, the house was gone with substantially less funds expended utilizing public works staff for the work. With this area of town designated for redevelopment in the Downtown Strategic Plan, the original purpose for this property will come into play as the planned redevelopment occurs over the next few years.

Letters have been sent to twenty property owners whose water the Town of Fraser samples, per state regulations to confirm compliance with lead and copper levels. The letter reminds these property owners of the fall round of samples.