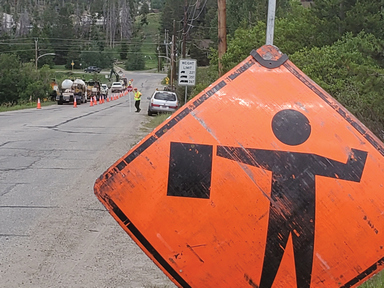 Photo: Signs are going up in preparation for the bridge replacement project on County Road 8 slated to begin August 5th.    Photo by Michael Turner

At the July 17th regular meeting, following approval of the Agenda and Consent Agenda, less item a. Final Acceptance of Elk Creek 1&2; and, b. Final Acceptance of Willows 1&3, the trustees opened a Public Hearing for a request of easement vacation by Ski & Board Broker LLC. The parcel, located at 601 South Zerex Street, had been omitted from the vacation requested and approved in fall 2018 and was not discovered until a building permit was submitted by the applicant.

Town Planner, Catherine Trotter, explained the request was pretty straightforward and staff recommended approval. All utilities contacted expressed no concerns with the vacation request. Having heard no public comment, the trustees approved Ordinance 471, the request for access and utility easement vacation. Mayor Pro-Tem, Eileen Waldow, cast the only dissenting vote due to having cast the same on the previous request last fall.

Auditors McMahan & Associates LLC presented their 2018 findings to the board and staff at the Workshop preceding Wednesday’s meeting. The auditors noted the town had added to all fund balances, with the exception of the Water fund, which had been drawn down to purchase water rights. The auditor, Paul Backes, CPA, CGMA, told the trustees it was a “clean audit with a prudent and reasonable result.” The only reported deficiency was in the current tracking and inventory system pertaining to the newly implemented pay-as-you-throw bags. The auditors recommended the town limit access to the bags to necessary staff and conduct an inventory at least annually and reconcile to the trash bag tracking sheet.

Town Manager, Jeff Durbin, told the trustees he’d had a meeting with Duckels Construction, the contractor selected to complete the bridge reconstruction work on County Road 8, earlier in the day. He told the trustees that construction would begin on August 5th, as long as the river level came down. “We have been working toward this for 15 years,” said Manager Durbin.

Access to US 40 via CR 8 will be closed during construction, which is expected to take about three months, with financial incentives in place for early completion. Signage will be going up over the next week. The detours will run through the Wapiti Lane, Meadowridge and Winter Park Ranch neighborhoods, filtering out onto CR 804. Travel delays should be expected while the bridge is demolished and replaced.

Most of the funding for the project will be paid by CDOT. The remaining expenses will be split by the town of Fraser and Grand County. Based on the most recent traffic counts, Fraser will be responsible for about 37% of the remaining costs and the county will pick up 63%. An Intergovernmental Agreement (IGA) between the town and county was approved for signature during the meeting to reflect the cost-sharing agreement.

Manager Durbin provided the trustees with an update on the program they are hoping to roll out in tandem with the town of Winter Park. “The new model would be limited to people living and owning in the Fraser Valley,” said Manager Durbin. He told them they were working through diligence with the town of Winter Park. They have had a number of conversations with title companies and local banks and found the real estate community to be supportive. Manager Durbin praised Bank of the West for assembling a team of 4-5 to look at the program and helping make the program compliant with Fannie Mae. In doing so, it would open up loan financing through any mortgage broker. Another meeting of stakeholders will take place in the next few weeks.

Trustee Ryan Barwick asked, “What do you think?”.

With factors still to be worked out, Manager Durbin replied, “Once we get past that, we want to roll it out with Winter Park.” He said he was assuming they would be able to do so shortly after they get the rest of the details sorted out. Manager Durbin added, “Every month, we hear about people that could participate in that program”.

To listen to the meetings and learn more, visit frasercolorado.com.