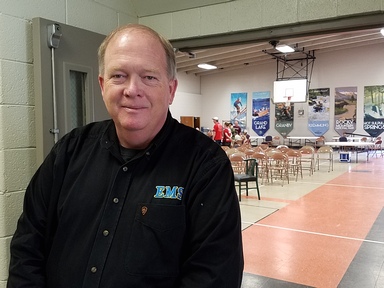 After sixteen years with Grand County Emergency Medical Services (GCEMS), Chief Ray Jennings has announced his retirement from the department. I recently had the opportunity to sit down with the chief to talk about his role, the department and how it has changed during his tenure.

Jennings moved from Glacier County, Montana to Grand County with his wife Audrey in the fall of 2003. He recalls, “When I was chosen to come here, it provided a very unique opportunity. My special job set is to take a take a broken ambulance, whether it is failing financially or functionally, and then fix it, make it work, bring it up and make it a prominent ambulance service. That’s been my toolset for a number of years. So when I got this job, commissioners Anderson, Dailey and Newberry told me ‘you’ve got about 6 months to fix this ambulance service or we’re just gonna’ have to shut it down’. I said, ‘that works for me, that’s what I do’.”

“I came in, brought everybody together and told them what we’re going to do. We started on a path that, for the last 16 years, has been very progressive. We have really grown the organization and developed a great group of EMTs and Paramedics. We have Dr. John Nichols, who has been the medical director since about 2000, and added Darcy Selenke MD as assistant medical director, which has benefited the team tremendously.”

Under Jennings’ tenure, the department has become well known in the state of Colorado, across the U.S. and internationally. Last year, the Canadian Health Ministry consulted with his team to learn more about certain protocols utilized by GCEMS. Other countries that have visited include New Zealand, Australia and Ireland. Jennings said, “They come and visit us for all the stuff we do, 911 service, backcountry and interfacility transports, basically the whole pie. It has made us really well known everywhere.” 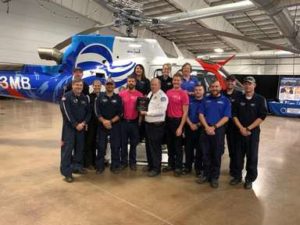 “Over the years, we have won a lot of awards. We have a highly talented team dedicated to serving the community’s needs,” said Jennings.

In 2017, Children’s Hospital of Colorado recognized GCEMS for Excellence in Pediatric Trauma, Dr Nichols and Jennings have both been recognized for Excellence in Healthcare, receiving the Therese McElroy award in 2018 and 2015 respectively, GCEMS was Ambulance Service of the Year in 2010, and received various educator and individual staff awards and more in the years since Jennings took the helm.

Most recently, GCEMS was recognized as  ‘Agency of the Year’ for Excellent work in Partnership with MedEvac. “This is a peer group. It is more resounding when you have someone you interact with recognize what a great organization you have, the people and what you do,” said Jennings.

Community and staff education is priority

GCEMS launched the EMT program in spring 2005. An after-school program for high school seniors, only a few completed the course due to other senior activities mostly taking priority. It was then that Middle Park High School VoTech reached out and worked with GCEMS to create a class that took place during the day at school. The first graduating class was in spring 2006. That class designed the logo that is still in use today. “We have had close to 170 young men and women go through the east and west Grand High School programs. Additionally, the Adult EMT program has also had between 170-180 students that have gone through the initial EMT program.” Some have stayed with GCEMS, others have gone on to become nurses, police officers, firefighters and physician’s assistants and some realized it was not the best career path for them and moved on in other directions.

“It’s been a great program. We have had multiple generations of students, family, brothers and sisters, that have taken the course,” said Jennings. “What’s cool is that they graduate with job-ready skills.”

Internally, education is a primary focus. “10 years ago, we had 6-7 Paramedics. Today, we have 22. We have grown our level of expertise. As the community has changed, so have we. Medicine changes so rapidly – there are so many more things we have focused on to enhance our care. We have built a foundation based on training and education. So when you call for help, the people that show up know what they are doing.”

Jennings says that GCEMS is continually looking for ways to “do things better”, to create efficiencies that make sense for the department and the public. “This year will be our busiest year for call volume,” he said. “We have added ambulance crews into the system, we have adapted and we have reinvented our schedule so we have more available ambulances.”

It used to be that 4 ambulances were on duty at any given time. Now, there are six on Saturdays and Sundays, five on Mondays and Fridays and four on Tuesdays through Thursdays. GCEMS covers the entire county, from the top of Berthoud Pass to the Alpine Visitor Center in Rocky Mountain National Park to the top of Rabbit Ears Pass and County Roads 1 and 3. By retooling the schedule, they are maintaining a 10 minute and 30 second average response time throughout the county. According to Chapter 2 of the state’s trauma regulations, this is half of what is deemed typical for a county our size.

“Every day, we have between 4-6 ambulances out there. We own 9, and we can put up 9 trucks at any given time. Even our office staff is trained as EMTs and that is on purpose, because emergencies happen. Being able to expand and contract, we have designed our system so that if we had a big emergency, we can make that work. There are days when we will have 5-6 calls at the same time, or 3-4 transfers out of county. We are that covered and that prepared. You don’t know what all is going to happen in a given day.” He added that when a large incident happens, even though it gets a lot of attention, there can be other emergencies happening at the same time which are equally important. While the call volume has doubled since 2003, GCEMS manages the increase with the same amount of staff.

GCEMS is financially supported by a countywide 2 mill property tax levy and fees collected for ambulance services. In the past 16 years, the department has only sought funding from the county’s general fund in three years, 2013-2015, when the economic downturn took its toll on the department’s bottom line. 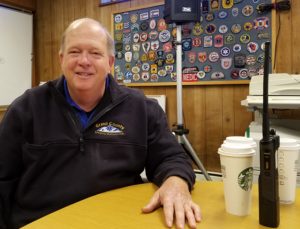 Chief Ray Jennings at his “home away from home” during a 24-hour shift at GCEMS HQ in Granby.     Photo by Casey Malon

Jennings says that while he is retiring from GCEMS, he is far from retiring. “I am leaving from here, looking for a really good opportunity. I think it’s time for changes to take place and there are some changes I need for me, to look for a new challenging role. Whether I stay here or move somewhere else, we’ll see. I think it’s time for a different point of view.”

It is quite clear the chief is very proud of his department. “We have put together a great program. We are very dedicated to our community. That’s what it’s been all about – how do we take care of our community? There’s about 16,000 residents here and that pops up to 30-50K, depending on events. We go to about 150 events every year and still provide ambulance service to the community. We have built this ambulance service to support all those different functions. It’s a big-ass jigsaw puzzle, putting it together, keeping it flowing and working, we are very fluid. I would put my staff up against any department in the entire world.”

Jennings added, “I am retiring from here. But am I retiring from the world itself? Oh hell no! I am that person that, if I die doing my job, that will be fine. I have enjoyed this – I have a great team. The people you work with makes a difference in what you do everyday. The people, the community and our partners in law enforcement, fire and search & rescue all work together to make it successful. At the EMS level, it’s in great hands. What I can say to the community is, ‘Say something about your EMS – keep it alive and keep it sound.”

While the county begins to search for a new chief, Jennings is confident the team that he has in place will ensure a seamless transition to the next EMS leader.

EMS deputy chief, Allen Pulliam shared, “When Ray took over as EMS chief 16 years ago, Grand County EMS was literally months from failing. He has since built one of the best ambulance services in the state, or even the nation. He has a huge heart for this community.”

The press release from Grand County officials stated, “Chief Jennings has not only built a department committed to this mission, but has led by example. He has taught us how to lead with integrity, empathy, and inspiration, without hesitation. Chief Jennings has challenged us all by setting high but attainable goals, while providing the support and guidance to become the best leaders we can. He has displayed a level of excellence that can be surpassed by none. His ability to quickly and efficiently make decisions during a time of crisis have not only been admirable, but lifesaving. On behalf of everyone at Grand County, thank you Chief Jennings for everything you have done for GCEMS, the community, and the EMS industry. Your leadership and commitment to excellence will truly be missed.”

Chief Jennings’ last day with Grand County EMS is set for January 17, 2020. “The world is my oyster,” says Jennings. Whether this is the last we see of Jennings in a county leadership role is yet to be determined. One thing is for sure, his successor will have some big shoes to fill.