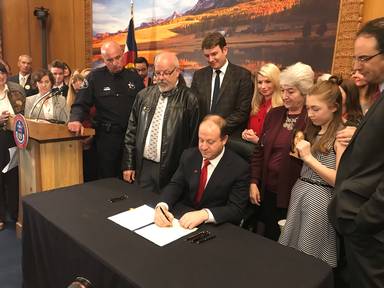 Colorado’s controversial “red flag” bill was signed into law by Gov. Jared Polis April 12th, with more than half of the state’s counties declaring opposition to it and many sheriffs promising not to enforce it at all.

Following months of debate, the bill finally made it to the Governor’s desk for the final signature. While proponents say the law can prevent mass shootings and reduce gun-related suicides, opponents say it could violate second amendment rights.

Extreme risk protection orders, also known as red flag laws, gun violence restraining orders, or ERPOs, authorize family members, household members, and law enforcement officers to petition a court to restrict an individual’s access to firearms. If the court finds that the person presents a danger, the person must surrender his or her firearms to law enforcement officials and is prohibited from buying, selling, or possessing firearms for a prescribed amount of time.

Five states had extreme risk protection order laws prior to 2018. During the 2018 sessions, eight states enacted legislation and another two states considered bills.

The law will go into effect in January 2020. Along with judges’ powers to remove guns from potential dangerous individuals, family members, household members and law enforcement officers can petition courts for temporary extreme-risk protection orders.

Petitioners who “establish by a preponderance of the evidence” that a gun owner poses a threat and submit a signed affidavit would prompt a judge to hold a hearing to decide if a two-week order can be granted. During that window, the parties would appear before the court, where the judge could remove guns for up to 364 days.

Gun owners must prove they are not a threat to themselves or others, according to the bill.

“This is a moment of progress,” Colorado House Majority Leader Alec Garnett, one of the legislation’s four sponsors said in a press event at the capitol. “We did something that was difficult and that is going to save lives.”

Not everyone is on the same page as the House Majority leader. Even though House Bill 1177 is now law, there are likely to be lawsuits challenging its constitutionality, and conflicts with county sheriffs who have vowed not to uphold a gun-seizure order issued by a judge under the legislation. El Paso County’s commission, for instance, has already vowed to file legal action against the legislation. Other groups are lining up at the same door and the next few months will certainly reveal a checker board of legal strategies.

Grand County Sheriff Brett Schroetlin said, “We have been following this closely and our main concerns are officer safety and constitutionality.” Schroetlin, a Colorado native, has been a resident of Grand County for nearly 20 years and has sworn an oath to uphold the laws of the land. “We have taken the oath to the State Constitution, the United States Constitution and the Laws of Colorado.” The EROP bill puts law enforcement agencies in a unique situation and Schroetlin has some concerns, but said, “It is early and we are not sure where this bill will be in six months”.

Schroetlin added, “We support the constitution every day on every call or incident, regardless of party lines. Everything we do has constitutional implications and I don’t want to be put in a position that would violate my oath to our country or state”.

Half the counties in Colorado have declared themselves ‘Second Amendment Sanctuary counties’, discouraging sheriffs and judges from issuing or carrying out orders to remove weapons from the homes of residents.

Already, 38 of Colorado’s 64 counties have officially declared their opposition to the bill, and 35 of them have passed formal resolutions against the law. Many of the resolutions declare the jurisdictions to be Second Amendment ‘sanctuary’ or ‘preservation’ counties, and pledge not to allocate resources to enforcement of the law.

Grand County Commissioner Kristen Manguso believes the issue has divided communities throughout Colorado. “I don’t think we should make a political stand or declare anything at this time.”  Manguso expressed concerns that this type of legislation “may” cross a line. “I know it has meaningful intentions, but if we start stepping on the rights of Americans, we are heading down a slippery slope.”

According to data from the Centers for Disease Control and Prevention (CDCP), more people died from firearm injuries in the United States in 2017 than in any other year on record, up by more than 1,000 from the year before. Nearly two-thirds were suicides. It was the largest yearly total on record in the CDCP’s electronic database, which goes back 50 years, and reflects the sheer number of lives lost. While 2017 reached an apex for gun related deaths in the US, 2018 was down from that high mark by nearly 800 deaths.

Commissioner Rich Cimino told the Winter Park Times, “There isn’t much middle ground on the issues surrounding gun violence, in part because you are either zero percent affected or one hundred percent affected by gun violence.” Cimino said the public pressure surrounding this issue has been polarizing, stating “we have not have had any positive comments”. Cimino added, “We want to do what is best for the public safety, but this bill seems to run counter to the second amendment and that goes against my political philosophy”. Cimino commented that the BOCC was going do everything they can to follow the law and protect our citizens, adding, “I may lobby on behalf of my constituents, but we plan on following the law”.

“Trying to solving one problem can create a complex cascade of other problems”, said County Commissioner Meritt Linke. The bill doesn’t seem to follow the due process of law. “You are supposed to be innocent until proven guilty”, said Linke.

Critics are concerned because the law might encourage false claims. While some of the state and pending federal laws penalize erroneous charges and abuse, the immediate damage to a person’s legal status and reputation could be irrevocable.

Proponents of the bill believe the due process is extensive. Anyone seeking a protection order must offer ‘a preponderance of evidence of risk’ at an initial court hearing, along with ‘clear and convincing evidence’ to obtain an order.

“This law will not prevent every shooting, but it can be used in a targeted way to make sure that those who are suffering from a mental health crisis are able to temporarily have a court order in place that helps make sure they don’t harm themselves or others,” Governor Polis said after signing the bill in April. “Today we may be saving the life of your nephew, your niece, your grandchild.”

Don’t be fooled, say critics. These laws, sold as prevention and mental health measures, are one more step towards thwarting the Second Amendment outright.

On April 23rd, 2019, the Grand County Board of Commissioners (BOCC) unanimously reaffirmed the 2013 BOCC Resolution defending the US Constitution Second Amendment Rights and Article II, Section 13 of the Colorado Constitution.

To read the full resolution, you can find it in our online article.