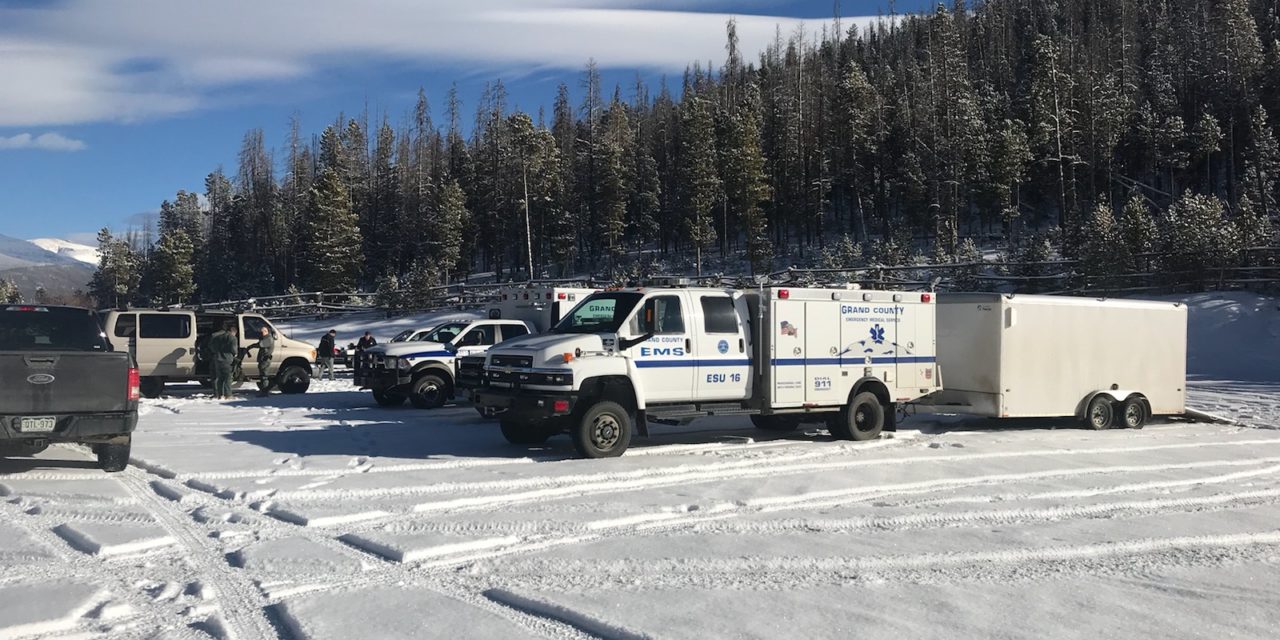 At the August 28th Board of County Commissioners meeting, a team from the Colorado Department of Public Health and Environment (CDPHE) presented an evaluation of current systems and made recommendations for improvement.

The evaluation had been requested by the county over a year ago, and was performed at no expense to the county. As part of the process, an anonymous questionnaire was cascaded to all stakeholder agencies for distribution to staff and used to gather valuable insight. The heaviest concentration of responses reportedly came from Grand County EMS and Middle Park Medical Center employees. Then, in January, the CDPHE team came to Grand County to conduct a series of interviews and systems audits with stakeholders.

The team spent the next few months going through the information they had gathered and submitted the completed report to the commissioners on July 18th.

County Manager, Lee Staab, introduced Randy Kuykendall of CDPHE, who explained the technique utilized in conducting the evaluation. Kuykendall told the commissioners that he had first been exposed to it back in the 1980’s as developed by the National Highway Traffic Safety Administration at that time. “The process is an effort to provide objective, transparent feedback to local EMS and Trauma systems”. He went on to say “a community must be absolutely willing to open its doors and its books for this to succeed. There can be no secrets. Good patient care starts with good communication and sharing of best practices”.

“Grand County is a functioning EMS and Trauma system”, said Kuykendall. “Nothing is broken, and we have the ability to move on to the next level.” In Colorado, unlike most other states, EMS typically falls under the purview of the County Commissioners. Kuykendall told the commissioners that the team recommends EMS remain a part of county government.

In the report, the analysis addressed 13 separate components of the current EMTS system. Team members that took the lead on individual topics presented their findings to the commissioners.

The team discovered the county’s current resolution governing licensure of ground ambulance services had been adopted in 1977. While it contained elements standard for that time, it does not reflect current emergency services standards nor does it encourage broad participation for an integrated EMTS to function effectively. Revisions to governing law which had been enacted over the last forty years were not amended to the resolution either.

The county had drafted a proposed resolution to update and conform to standards and provide better clarification on complaint intake, validation and investigation protocol, but will likely need to be modified further to comply with anticipated regulatory changes.

The team also recommended they consider establishing a county emergency services council and that each special district review and update, as necessary, their service plans.

With respect to Grand County EMS, there were, “unequivocally, a lot of impressive findings”, said Eric Schmidt. “Commonly, when we come to a system concern, it is often finance.” GCEMS has an excellent payor mix and their collection rate is 75-80%, which is very high comparatively. Similar systems in other parts of the state struggle with a 30% collection rate or less. The team found they had solid internal billing practices.

“We looked at the system as a whole for opportunities, but EMS was ahead of us”. They had already looked at outsourcing their billing and decided to keep it in house. They also reduced their billing staff in half, from 4 to 2. “Their practices are solid, effective and accountable” said Schmidt.

He also noted that they had the opportunity to review their expenses and revenues in great detail, which is not normally seen because of the time limit. GCEMS shows an “impressive level of fiscal accountability”.

Recommendations included increasing the billing staff by one person, review the amount and distribution of federal payments in lieu of taxes to determine proper allocation for services provided on federal lands, continue to seek grant funding, and, in the future, consider asking the residents for an increased mill levy to support GCEMS.

The team looked at HR functions within GCEMS and found everyone involved to be dedicated and believes they’re in it for the right reasons, patient care. Challenges with staff retention were reported, and the team assured them that they are not unique in this challenge, that many mountain communities have the same challenges.

While the team was here in January, GCEMS had just implemented new shift schedules to accommodate out of town staff. They found this to be creative, showing responsiveness to staff needs.

As for determining correct staffing, Grand County has a unique challenge with a seasonal influx of visitors and were found to be effective in using the crew they have to meet the demand. They are currently operating without a specific response time definition. Having response time expectations set and benchmarking will help determine whether staffing is adequate.

Determining the right response for the right condition should also be reviewed. Does a broken leg on the soccer field need the same response as a 3 car pile-up or cardiac event? Give some thought to that”, said Schmidt.

The team recommended GCEMS conduct “stay” interviews, outside the normal performance evaluation period. To ask staff ‘why are you here?’, ‘are you satisfied?’, ‘what would it take to keep you here?’, etc. This provides information on what it takes to keep the staff. Retention is much less expensive than recruiting new staff members. Schmidt also told them “it is important to close the loop, to follow up on comments received during the interview, let them know they were heard and here’s what you’re going to do”.

The team also recommended that GCEMS begin planning updates to the base and outlying ambulance stations, having found it to be a negative influence on staff, and, impacting retention.

The team found opportunity for more collaboration between the Medical Directors. “Is there a way to regionalize and standardize practices across agencies?” CDPHE’s Dr. Jeff Beckman asked. “Multiple voices and opinions reflects better outcomes and is a starting point to share best practices.”

Beckman recommended the county look at adding a local physician to serve and assist GCEMS, and to consider adding a financial stipend, so that if an abrupt change in Medical Directors occurs, it could ease the transition.

This component speaks to regionalization and recommends onboarding all available agencies, including mutual aid agencies outside the county and medical air support. Again, communication, collaboration and development of a common set of treatment protocols is the common theme. Other areas addressed included unrestrained vehicle occupants and use of emergency lights and sirens, which should be minimized during scene response and patient transport.

Scott Sholes described the challenges associated with providing good quality educational opportunities to EMS staff in rural communities. “It is vital and it is expensive”, stated Sholes. GCEMS, “they’re rockin’ it”, said Sholes. “They have an outstanding internal education system.”

But, it is fragmented, which can add confusion. Rocky Mountain National Park has its own dispatch center which does not operate 24 hours a day. Estes Park Police Department manages the calls when it RMNP dispatch is not operating. Grand County is fortunate that Dr Nichols provides guidance, adding a level of cohesion to the system.

Reverse 911 allows ability for mass notifications which is great for locals, but difficult to reach tourists. The county’s CodeRed system is also a real positive, but requires public education to advise residents and visitors of the need to sign up for it.

The 911 system has no real problems perceived – it is a good, strong center. However, cell phones do not always have good coverage here. It is a misnomer that gps tracking always works in the backcountry. The county needs to spread the word through local media, television, and newspapers that coverage is not always adequate. Visitors need to be reminded of the need to tell someone where you’re going and when you’ll be back.

The team recommends the county find ways to upgrade and expand capabilities of the back-up VHF system, collaborate with RMNP and collaborate with other agencies to develop and implement a county-wide dispatch standard operating procedure to improve system efficiency.

Schmidt told the commissioners there were “lots of good things to talk about here”. There is adequate patient care use of the Epic system in all three medical centers, and, GCEMS’ use of the ESO system also works well.

The team did recommend stakeholders participate in information sharing via the nonprofit, Colorado Regional Health Information Organization (CORHIO.org). They also recommended they implement the capability to record communications between EMS providers in the field and on-line medical direction, add mobile data terminals (ruggedized laptops) and implement a direct connection to their billing program to increase efficiency.

Most members of the community do not completely understand what each agency does and is responsible for. This allows the opportunity to communicate directly with the community, to showcase what each agency does and share knowledge of what you and they can do. It is a way to collaborate and work together. The high school-based EMT program, which was established in 2005, has been a great way to help students with their career paths and has also served as an employment feeder.

The team recommends they look for opportunities to collaborate and strengthen what it is that they’re doing with the community. Community members are potential good first responders. They encourage all agencies to identify a single person within each to be responsible for educational opportunities and coordinate with other agencies.

The team was impressed by the level of commitment exhibited by first responders. They see the potential for a large incident in Grand County. The materials and written plan needed to handle a large scale disaster is in place, but there is a need to “Connect the dots”. All of the agencies – fire, law enforcement, Search and Rescue, EMS, etc. have been trained on what to do, but it has been a long time since anyone has gotten together to train. The team recommended they plan tabletop exercises with all stakeholders, including local medical center staff, to help with planning.

The team mentioned the fact that the Emergency Manager for the county works from within EMS. They stated there were concerns and confusion on the role and responsibility for that individual. They told the commissioners they were unable to identify anything that showed they were holding tight to any information and directing anything toward EMS.

Other components: Evaluation, EMTS Research and Integration of Health Services determined there were gaps, especially within system integration. “You’re going to have to talk more to each other if you are going to achieve integration”, said Karl Gills.

The need to improve the flow of communication between agencies was a resounding theme. The team recommended that all agencies meet, at least on a quarterly basis, and, based upon animosity between leaders of EMS and Middle Park Medical Center, it was suggested that the Commissioners and the Kremmling Memorial Hospital District Board participate in initial discussions. The county may also consider hiring a consultant to move the process forward.

At the end of the presentation, Kuykendall told the commissioners that these were their recommendations and the county should look at them and institute the ones that make the best sense for Grand County.

Michelle Lupica, MD, from Middle Park Medical Center, told the commissioners that a volunteer assistant Medical Director, representing the medical community and emergency medicine would be a very good addition to the system.

Schelly Olson, of Granby Fire Department, asked the commissioners what system is in place to make sure the concerns were addressed.  Commissioner Linke told her that this was something they would consider and they would need to develop a plan.

To listen to the audio recording or read the full report, visit: co.grand.co.us.