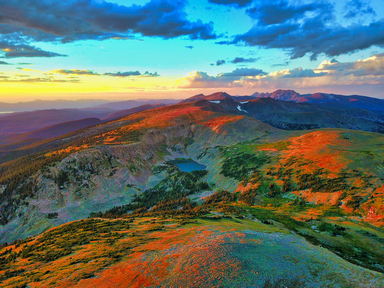 The most recent meeting of the Grand County Board of County Commissioners (BOCC) saw a return to a long-standing issue, that of reopening Rollins Pass Road to thru-traffic between Grand and Boulder Counties. East Grand residents and fans of Rollins Pass, Kate and Travis Wright, appeared to present on the state of the Pass as well as today’s challenges and concerns about the potential reopening of the route.

Rollins Pass Road has a long history as a transit route, stretching far before given its current name or before early pioneers began following it. Known human activity in the area dates back nearly 10,000 years, evidenced by such artifacts as flinted projectile points and long, low, rock walls known as game drives, constructed by indigenous peoples to facilitate hunting. But the passage, traversing the Continental Divide, was also one of the first gateways into Grand County for early American pioneers. In summer 1862, a military unit made up the first known wagon train to traverse the then-called Boulder Pass. The route was soon published for other travelers and in 1864 the area’s first year-round (non-indigenous) residents, James and Maggie Crawford, traveled over the pass.

By 1873, John Rollins had constructed a toll road between Rollinsville and Middle Park’s Fraser Valley. When the railroad entered Grand County in 1904, it followed a similar route as the Boulder Wagon Road, and achieved an engineering feat by the construction of three bored tunnels in such rocky mountain terrain. The train finally granted easier access to the remote area and brought more regular supplies, changes which would enable more widespread settlement in the region. After the opening of the Moffat Tunnel in 1928, which rerouted the rail route, usage of the roadway dwindled. But as automobiles became more common, traffic increased, and the road was listed as an official recreational roadway in 1956. The passage meant continued ties between Grand and Boulder Counties, as the stories of many ranch families will attest.

However, one of those tunnels would eventually become unstable. Rockfalls in the Needle’s Eye Tunnel, just over the line of Boulder County, have been recorded since 1949. A 1979 rock fall in that tunnel meant the permanent closure of the thruway. But residents and visitors were desirous of the route staying open. Several studies were done in the 1980s, reinforcements were made, and the tunnel reopened to vehicle traffic in 1989. In July 1990 another rockfall in the Needle’s Eye Tunnel would prove near fatal and the tunnel has been closed ever since.

The roadway itself is still in use on either side of the tunnel, with recreators in Grand, Boulder, and Gilpin counties using it for wilderness access and such activities as hiking, fishing, skiing, vehicle use, and more. In 2002, more areas surrounding the pass were deemed wilderness, through the James Peak Wilderness Protection Act, a Congressional Act, adding to the area protected in the Indian Peaks Wilderness.

But Grand County has always been desirous of reopening the roadway, viewing it as both an important resource for economic development and maintaining ties with the Front Range. And the James Peak Wilderness Act itself states in an Administrative Provision that the Boulder Wagon Road should remain open to thru-traffic until such time that one or more of Grand, Boulder or Gilpin counties should request the reopening of the Rollins Pass Road, at which point the US Department of Agriculture would “provide technical assistance and otherwise cooperate with respect to repairing the Rollins Pass Road (…) sufficiently to allow two-wheel-drive vehicles to travel between” Highways 119 in Boulder County and 40 in Grand County. However, both the Wagon Road and the former rail route remain closed to thru-traffic, in spite of repeated requests by the Grand County government to reopen at least one of the thruways.

Kate and Travis Wright are enthusiasts of and regular recreators on Rollins Pass. They are the authors of the 2018 book “Rollins Pass” documenting the history of the area and founders of the Preserve Rollins Pass. They are active with the Grand County Historical Association, of which Travis is currently Board President, and is the Vice Chair of the Gilpin County Historical Preservation Advisory Committee, on which he also serves. They have found and documented finds of local historical and archaeological significance, such as an unknown wheel site, a former mining camp, and a projectile point that is the oldest known artifact found in the area and which extended the known human activity an extra 1,000 years into the past.

The Wright’s gave a 1.5-hour presentation before the Board and other attendees, stressing the archaeological and environmental import of the area. They discussed the history of the route and the long-standing concerns, cited in papers all the way back to the early 20th century. The cited studies done in the ‘90s, following the final closure of the Needle’s Eye Tunnel, that concluded mistakes were made in the reinforcement engineering. They expressed concern over misuse and abuse that is taking place in the area. They provided much visual evidence, including photos of vehicle tracks going off-road and across the fragile tundra, off-road vehicles damaging the millenia-old game drives, and illegal roads that are now so firmly established that even responsible recreators mistake them for valid routes; and video of individuals intentionally bypassing gates and closures to take motorized vehicles into unauthorized areas, and their own vehicled passage across narrow and crumbling roadways. They documented vandalism, motor accidents, and recreator casualties. Throughout the presentation, the Wrights provided facts that questioned the viability of re-opening the pass as a thoroughfare, while also taking into account priorities (historic preservation, environment, and visitor harm).

The Wrights underscored the values of historic preservation, including increased tourism, tax benefits, and economic growth. And they provided suggestions as to ways the area could be better “cared for,” in reference to a statement once made on the subject by Commissioner Merrit Linke that “People tend to take care of what is cared for.” They advised partnering with area experts, such as Dr. Jason LaBelle of Colorado State University, who has conducted archeological activity in the area for years. They suggested encouraging responsible tourism, increasing sheriff patrols in the area, creating a historic preservation board, and aligning with Boulder and Gilpin counties in their interest in historic preservation.

They also proposed using existing infrastructure, such as the Moffat Tunnel, which was initially intended to also provide vehicle transport through the tunnel. They indicated an understanding that the lease for the Moffat Tunnel was up for renegotiation soon and that it may be an opportunity to negotiate vehicle transport. They were uncertain as to the current lessor, though the Union Pacific Railroad is understood as the current lease holder. It appears that control of any lease was managed by a Moffat Tunnel Improvement District Commission, but that all powers were transferred to the Department of Local Affairs in 1998. Little detail about this proposal is now known, including how many vehicles a transport could carry, but Commissioners expressed an interest in the proposal.

There was brief discussion and few questions following the presentation. Linke asked about evidence or harm caused by historic sheep grazing operations that his family had managed. The Wrights offered some 1917 photos of the sheep camps and an environmental impact study from the 1950s, but indicated no knowledge of long-term damage. Jim Yust, of Kremmling, stated that the road should be reopened. Yust’s family homesteaded here in the 1880s, he also serves on the Historical Association Board, and has been instrumental in much area historic preservation, including Kremmling’s Heritage Park and the preservation and restoration of the Kremmling Train Depot.

The perspectives of such pioneering families as the Yusts and the Linkes, who also settled in Grand County in the 1880s, were not addressed by the Wright’s presentation. These historic families have tended to be strongly in favor of the Pass remaining open to thru-traffic, even testifying before other County Commissions as to the historic significance of the Pass and its critical importance to the County’s ongoing economic development and connection to the Front Range. In spite of Grand County’s consistent desire to reopen the road, Boulder County has refused any cooperation and opposed the proposal. Gilpin County has gone back and forth as to their stance on the issue. And the Federal government has not taken action to enforce the language of the 2002 Act.

“Outnumbered now, we still do some maintenance on the Grand County side with the idea of minimizing natural degradation of the road, preserving culverts and other drainage structures,” explained Linke, “until a long-term solution and funding can be found. We do not have any plans at this time to formally request a re-opening.”