Maegan Lokteff, Executive Director of Grand Beginnings, appeared before the commissioners on Tuesday morning requesting they issue a proclamation in April, that the next year (through May 2020) shall be “A big year for little kids”, in celebration of their twentieth anniversary. “This is an opportunity to recognize everything we have done, the strides we have made to earn high quality ratings of our pre-schools”, adding, “is also a fundraising push to work toward our endowment”, said Lokteff.

Lokteff invited the commissioners to the Children’s Fair on April 26th at Granby Elementary School, where, she told them, she would like to read the proclamation to the children, their families and early childhood educators at the event opening.

The commissioners approved a Resolution in recognition of Grand Beginnings efforts in making Grand County a vibrant community. The resolution will be drafted and presented for approval at next week’s meeting.

Superintendent Chris Baer told the commissioners, “We took a beating last Wednesday with all the snow falling in a short time”. He told them that Fraser was especially challenging because visibility was limited which caused them to shut down operations for a few hours. “We started out behind, but those guys stayed and we got through it”, said Baer. “When we get a lot of snow, people struggle to find places to store it.” 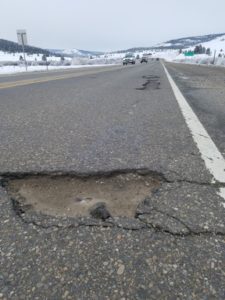 Road conditions are muddy and starting to pothole. “It’s the nature of the beast.” Baer told the commissioners they should be able to start making improvements in April, but there’s not much they can do with the current conditions.

They discussed the potholes that have developed on highways 34, 40 and 125, which are the responsibility of CDOT. Baer said he had received a number of calls and had referred the callers to CDOT.

Baer told the commissioners they had received complaints on snowmobile travel on CR 492. Snowmobiles heading into RMNP share the stretch of road with motorists and there have been a lot of close calls, line of sight, noise complaints, and other safety issues. Baer said he had  reached out to Grand Lake town manager Jim White to look for a solution to getting the snowmobilers safer access to the park.

Commissioner Manguso asked, “Why don’t we find a way to make a trail along the road?”. Baer replied, “We’ve tried it in the past – the issue is the driveways to homes along the route”. He told them it will take significant effort, including working with the NPS. “There’s a lot of obstacles.”

Baer also told the commissioners about the staffing crisis in Fraser. “I am grasping for straws in the Fraser Valley”, said Baer. “We are 4 people short and 4 are going to retire this summer. I’m starting to panic.”  Baer told them he was looking at ways to get the word out and interim county manager Ed Moyer agreed to help him with his concerns.

In response to the BLM’s proposals for the Upper Colorado River Special Recreation Area Management Plan, Moyer had prepared a letter with the county’s comments. Responses are due to the BLM by March 23, 2019. “This is a very good thing, it needs to be managed”, said Moyer.

In the letter, the commissioners supported additional designated and permitted river campsites in RMZ 3 (the river stretch from Pumphouse to State Bridge). They also indicated that, if portable toilet systems and firepans were not required to be carried by every boat, they supported installation of vault toilets between Pumphouse and Radium and between Radium and Rancho del Rio, and, metal fire rings be incorporated at established campsites. Of the options presented, the commissioners supported Alternative C, but asked for further clarification of proposed fees.

The commissioners approved the letter unanimously.

Following discussion at the last meeting, Moyer had contacted Bob Johnson, with RJA architects, requesting his firm analyze the Whitmer Building and Granby Elementary School along with a six acre parcel the county owns in Hot Sulphur Springs. Johnson will return to present his findings at the April 9th meeting, giving the commissioners a short break from the weekly discussions.

Housing Coordinator, Sheena Darland presented the quarterly report. In the report, Darland told the commissioners they currently had 21 open down payment assistance loans and two new loans were being reviewed. 4 loans had been paid off in 2018. Also in 2018, there had been 11 home buyers education classes held, and 3 had already been held in 2019. It is interesting to note that not all of the attendees were Grand County residents. Darland told the commissioners they came from across the state.

The transition of management at Cliffview Assisted Living Center continues to go well. Darland said she was waiting for the final financial reporting from Senior Housing Options, which was expected by week’s end.

On February 28, the Department of Local Affairs, Division of Housing and Colorado Housing Finance Authority (CHFA) conducted a Listening Tour in Grand County. They met with each municipality and with county representatives. The major finding that resulted from the tour was the need for a Single Family owner-occupied Rehabilitation Program. The program, funded by Division of Housing and CHFA funds, would cover expenses related to rehabilitation of owner-occupied homes in need maintenance and improvements, allowing homeowners to ‘age in place’.

Moving into the near future, Darland is looking for ways to establish a revenue source for affordable housing and support affordable development.

Katherine Morris and Ed Moyer presented a water protection update to the commissioners. The winter’s snowfall has resulted in significantly higher snowpack than they had last reported. Morris observed, “it’s looking good on both sides of the divide”. However, some of the snowpack won’t result in streamflows because very dry conditions will cause a lot of the water to be taken up by the soil.

Morris told the commissioner that all entities have started plugging in their models to estimate when the date range when we will have have peak flow.

“We’ll have more information as we progress toward runoff”, said Moyer. “I’m looking forward to seeing how much water is going to hit Lake Powell.”

Public Health Director, Brene Belew-Ladue presented the quarterly reports to the commissioners. She started off by reaffirming the department’s Mission Statement and goals. Department statistics reported on communicable diseases investigated (65), animal encounters (41, with 8 requiring post-exposure prophylaxis), educational and emergency preparedness as well as licensing and compliance.

The Oral Health Program has been a big success. Each year, they visit the schools in February to provide dental screenings. In 2018, they screened 626 children, provided fluoride varnish under the “cavity free at 3” program to 413 children and made 85 dental referrals.

The WIC program has an average caseload of 104. The Granby location, which opened last summer in Mountain Family Center, has seen a total of 75 so far. Brene stated that while the numbers continue to go down, it’s happening across the state. Some move out of the area and many drop off by the time their infant turns one.

Senior Nutrition provides meals in Kremmling and Granby on Mondays, Tuesdays and Thursdays. In 2018, home delivered meals, which had been prepared in-house, switched mid-year to Mom’s Meals, which delivers via FedEx. In 2018, the average cost per meal rose 27%, from $17.78 per meal to $22.74.

Chairman Cimino said, “We hear how utterly valuable the services are to the people who get them. That meal – they treasure that meal and the time extraordinarily”. Chairman Cimino added, “this board is open to reducing the cost for the meals if, somehow, more meals are served. We are not looking to reduce funding, but expanding the number of meals”. The commissioners agreed they would like to see if there is a more efficient way to serve more people. The goal is to “continue to provide the most effective service and take care of our seniors”, said Commissioner Linke.

Grand County Rural Health Network Executive Director, Jen Fanning, told the commissioners she had come to the update meeting because the citizens health advisory had been working on Mental Health, identified as a top public health priority when creating a strategic plan for the community. “Public health makes sure we are addressing mental health”, said Fanning. She told them that it’s hard to pinpoint ‘that one thing’, so they had referenced the 2013 strategic plan.

“We knew then that we needed early childhood specialty, and Grand Beginnings has worked with Mind Springs health to get grants and train professionals in this area. A consultant also provided help to early childhood educators. It’s a collaborative effort”, said Fanning.

Fanning told the commissioners that 9 different agencies met on Monday and had a ‘phenomenal’ conversation. “The plan is large and got larger yesterday”, she said, adding, “how do we do this better together?”. The Health and Human Service coalition will look at the collective impact for this plan. The next step is to reach out to community partners and members to discuss acute and chronic treatment and find out whether the plan fits their needs. “It will help prioritize information, and hopefully, by the next meeting in June, we’ll have more to share.”

One thing they are working hard to sustain is the Mental Health Navigator partnership with Grand County, Middle Park Health and Mind Springs Health. The grant that has covered the cost of the 2 licensed providers ends in December 2019. “We are working with our partners on ways to sustain these roles beyond that point”.

The Mental Health Navigator can see people in primary care, mental health and home settings. “It has been pretty successful, and they have seen over 200 people per year” since the program began in 2017.

The other component of concern is transportation, particularly for M1 holds (patients assessed as a danger to themselves). Fanning pointed out that the closest Mental Health facilities are located outside the county, in Denver, Fort Collins and Grand Junction. Due to an insurance ‘loophole’ that does not consider the transport emergent, ambulance transport charges are not covered. Therefore, the Sheriff’s Department provides transport to the facilities. In order to transport anyone in a Sheriff’s vehicle, the individual must be handcuffed, essentially criminalizing the patient’s mental health condition. “We are paying a chauffeur for this service and the funding is almost gone. We need to lobby to get the transport funded by insurance”, said Fanning. The commissioners agreed that a discussion about M1 and Detoxification transports with other counties would help quantify the problem and develop a solution other than calling for the Sheriff’s Office to transport patients.