At Tuesday’s Board of County Commissioners’ (BOCC) meeting, Road & Bridge Superintendent Chris Baer gave the commissioners an update on the summer road projects. The projects were halted several weeks ago, when a core test on the asphalt laid on CR 53 indicated the asphalt mix was not up to standard. The project resumed on Monday, August 19. Baer said they will finish up CR 53 first and continue on to the remaining projects following completion.

The commissioners discussed comments they had received from constituents about people driving too fast in their neighborhoods. Commissioner Chair Richard Cimino suggested placing mobile speed trailers on the roads most frequently reported, in an effort to slow people down.

Superintendent Baer explained, “We focus on safety, not only of the traveling public but also of the work crews”. He told them Road & Bridge deploys mobile signage boards to advise travelers of construction projects. The Sheriff’s department has two mobile speed trailers and is typically responsible for placement and monitoring. “If we need to deploy speed signs, we are game,” said Baer.

The commissioners will discuss the use of the mobile speed trailers with Sheriff Brett Shroetlin and look at adding several more. 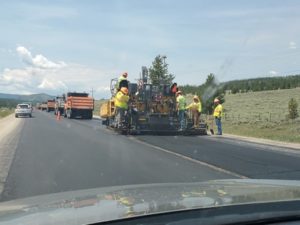 Colorado Department of Transportation (CDOT) crews have been working their way across US 40 in eastern Grand County, resurfacing sections of the highway that can no longer be patched due to high altitude wear and tear. Our extreme weather conditions cause the roads to break down sooner than roads at lower elevations. Each summer, CDOT finds a way to work within tight budget constraints to keep our roads safe. If you see them at work on our roadways, stick to the posted speed and give them a thumbs up! Photo by Michael Turner

The commissioners discussed the recent paving efforts on US 40 by CDOT. Chairman Cimino suggested sending a thank you note for the work they are doing. Commissioner Kris Manguso pointed out that CDOT only paves small sections of roadway. Work on longer stretches of road is done by subcontractors. Commissioner Manguso said that even though it would save money and result in more roads being resurfaced, it’s something that can only be changed legislatively. She suggested the commissioners consider doing something to move that process along. “At the end of the day, if it saves everybody money and we can get more roads done, I am in favor,” she said.

Chairman Cimino proposed drafting a bill to be presented to Colorado Counties, Inc (CCI) to submit. “We have a mutual interest in making this work,” he said. Commissioner Manguso added, “In rural communities, it does make sense.” Chairman Cimino said he would try to put something together.

County Manager Kate McIntire told the commissioners that the Grand Foundation had opened up the applications for nonprofits to apply for 2020 donor-advised funds. She told them the deadline had been extended to accommodate the county’s budget process. “It is up to the board to discuss what you want to do,” said Manager McIntire.

Commissioner Manguso stated, “I am okay with just the two. How broad do we go? We can’t fund everything.”

“We limit how broad we go with the amount,” said chairman Cimino. He added that the narrow categories make it difficult for nonprofits like Infinite West and Grand County Historical Association to “wedge their way in” to apply for and receive funding through the county’s donor-advised funds as they are currently administered.

“We have conservation trust funds, too,” said commissioner Manguso, adding, “we do have another pot that can help. There are some ways for us to find the money. I think that’s why we narrowed the categories.”

Commissioner Merrit Linke said, “I would be willing to broaden it in one category, environment, but not arts & culture or school sports.”

Commissioner Manguso said, “I am not in favor of raising it. We have a lot of expenses.”

“I agree – leave it at that amount,” said commissioner Merrit Linke.

“It is the time of the year to make decisions. We didn’t get where I wanted to get,” said chairman Cimino. “ I would like to put policies in place to open the door to some new organizations, not the same organizations again and again.”

“We would request that start up organizations receive a higher priority than continual requestors,” offered commissioner Linke.

“Maybe in 2020 we’ll develop some policy on what to accomplish for 2021,” said chairman Cimino. He added that there are several organizations that could be funded from the general funds. He said that Headwaters Trails Alliance (HTA) should have set funding and be excluded from the donor-advised funds.

Commissioner Manguso agreed, “I feel like they’re different.” She added that Middle Park Soil Conservation District is another organization that receives a few thousand dollars from the county annually. They provide the county with seed at cost, helping with erosion control and also review plats for planning and zoning.

“If we’d don’t adjust for inflation, we are giving recipients less,” said chairman Cimino. “I propose that $250K is a nice round number, with provision for cpi adjustment in future years.”

The last nonprofit the commissioners discussed was Grand Enterprise Initiative, which works in collaboration with Economic Development. In 2019, $45K had been allocated to the nonprofit, about half of which was funded by grants. They requested additional information on funding of the nonprofit before they made a decision on whether to fund the nonprofit outside the donor-advised funding.

Assistant Manager Moyer suggested having conversations during the budget hearings. “Going back to 2015, my goal for the commissioners at that time was to take the personal part of decision-making out of the process. Give a lump sum to Grand Foundation and let them dive in to determine whether they need that funding from donor-advised funds.” Moyer added, “figure out what we can afford to fund to Grand Foundation, define the mission guidelines, let Grand Foundation take that and run with it. As soon as you fund outside that process, it blows up.” He felt strongly that all nonprofits should go through the Grand Foundation. “There are nonprofits that have been creative in their applications. They may be recreation-based and still get money through health & human services, and now, environmental. There are ways to do that. I am recommending that you fund that single source and have those nonprofits go to the Grand Foundation.”

In regard to HTA funding, chairman Cimino said, “Infrastructure is my rationale for considering this outside of the donor-advised funds.”

“I agree to fund HTA,” said commissioner Manguso. “It’s unique. It’s not really a department, but it really is a pseudo department.”

Chairman Cimino and Commissioner Manguso were in favor of funding HTA at $50,000 for operating expenses. Commissioner Linke opposed the funding, citing other sources of funding the nonprofit, including local municipalities and the Open Lands, Rivers and Trails funding. They did agree unanimously on block grant funding in the amount of $255,500 for 2020 and to look at cpi in 2022.

Manager McIntire reminded them they were making recommendations and that nothing would be ratified until the 2020 budget is completed.

Chairman Cimino said he preferred a resolution, to reduce debates in future years.

Manager McIntire clarified, “It can be guidance.”

County Attorney Chris Leahy offered, “It is highly defensible, if entities are part of your mission.” As an example, he pointed out that trails leverage the organization.

“The strategic plan is really the binding document,” said manager McIntire. “Some budget decisions come from that. It helps guide and make these conversations easier in the future. This is just direction. There is an agreement with the Grand Foundation – I will bring the agreement, with the board’s direction given today, next week.”