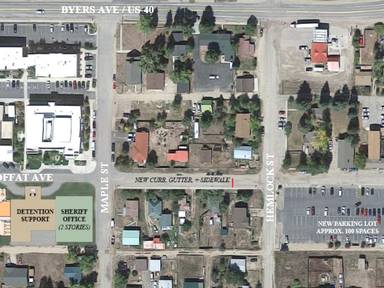 Bob Johnson, with Reilly Johnson Architecture returned to Grand County on Tuesday to deliver new cost estimates for the Sheriff’s Office and Detention Center. The county’s strategic plan determined replacement of the facility to be a #1 priority and the commissioners had directed staff to work with Johnson on additional cost models that would bring the costs down from the initial estimate of $32 million.

Johnson had worked closely with Sheriff Brett Shroetlin and Undersheriff Wayne Schafer to refine the space requirements in an effort to reduce the costs to replace the existing facilities. Through their efforts, they had managed to whittle about 8,000 square feet (sf) from the originally proposed design, to a total of about 28,988 sf, plus a 4,400 sf garage. They had also reduced the number of inmate beds from 60 to 52, while still allowing for future expansion through double-bunking and conversion to dormitory-style quarters.

Chairman Richard Cimino asked Sheriff Shroetlin whether he and his department found the cuts, “while not delightful”, to be acceptable?

The sheriff replied, “We understand the fiscal responsibility. We have gotten this down to a very manageable number and the numbers we came up with are good. Thank you.”

Johnson told the commissioners, “Just because we write this down doesn’t mean someone can deliver it. This is still yet to be proved.” A workshop will be held on July 22 from 8:30 am – noon, and Johnson told them he would have conceptual drawings prepared for that day.

The reduction in square footage succeeded in reducing estimated costs. Surprisingly, the commissioners noted the cost difference between remodeling and new construction was minimal.

RJA showed the costs for remodeling the existing Sheriff’s Office building and constructing a new Dispatch and Detention Center facility in the parking lot to the south. The overall costs for this option were estimated at about $28.5 million. Included in the estimate was $1.4 million to temporarily relocate operations for 12-15 months, during construction.

The second option showed the costs for all new construction of the facility in the south parking lot came in at about $29 million. The existing Sheriff’s building would be demolished after construction is complete, but staff would not be required to relocate while construction was underway.

Commissioner Kris Manguso asked Johnson, “Can you talk about the pro’s and con’s?”

Without hesitation, Johnson replied, “In my judgement, I would never remodel. The risk is too high.” He explained the condition of the 35 year old building could not compare to new construction. Comparing it to a large house, with wood frame and 1.5” thick gypcrete construction elements, the actual cost to remodel could turn out to be more than was estimated. Plus, it would not require temporary relocation of staff and inmates.

Commissioner Merrit Linke observed, “The other big problem I see is the parking.”

Funding for the project is still the greatest question. The commissioners had approved a proposal from investment banking firm, George K Baum, earlier in the day, to advise them in the event they choose to enter into a bond for funding. Other options for funding include a 2019 or 2020 ballot measure, a Certificate of Participation (COP) and/or general funds.

Johnson cautioned the estimated costs assumed a July 2020 construction start date. Each year thereafter would escalate costs by about 5%.

The workshop on July 22 will bring RJA and George K Baum to the discussions, as the commissioners continue to seek the appropriate balance to resolve the county’s facility needs.

To find out more, visit co.grand.co.us.