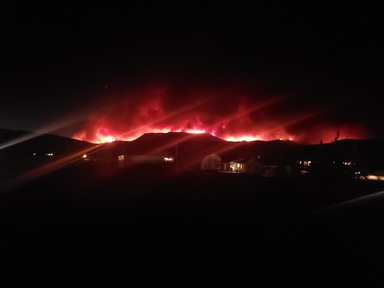 The Grand County Board of County Commissioners (BOCC) has devoted much discussion over the last few weeks to the aftermath of the East Troublesome fire tragedy, including debris removal plans and waiving fees for homeowners who have to rebuild.

The draft version of the letter requests “support from the State of Colorado in securing a Major Disaster Declaration from the Federal Emergency Management Agency (FEMA) for the East Troublesome Fire in Grand County.” It goes on to describe the fire, which began on October 14, including the “firestorm” of October 21, in which the fire spread 107,041 acres between late afternoon and midnight the same day, crossing Highway 125, forcing the evacuation of over 4,000 residents, burning into Rocky Mountain National Park, and burning 589 structures.

It describes how the BOCC declared a state of emergency on October 20 and how county and municipal governments, special districts, and utility providers have worked to conduct emergency protective actions but “request assistance as our capacity and resources have been rapidly overwhelmed.” It goes on to offer detailed response considerations, including staffing shortages, protective action expenses, debris removal, structural and infrastructure damages, water and land impacts, and economic repercussions.

Finally, the letter presents recovery concerns that have been identified in partnership with the US Forest Service and National Park Service by the Collaborative Assessment and Recovery Team, including hazardous trees causing road and trail closures; debris flows impacting roadways and possibly causing additional damages; sedimentation impacting watershed and dams in the fire area; flooding concerns for spring and summer; emergency needs for downstream communities; water quality for drinking water in downstream communities; infrastructure damage to electric, natural gas, water and sewer utilities; and road, culvert, and bridge damage due to flooding, debris flows and sedimentation.

Tuesday’s discussion was focused on debris removal, citing debris as both a safety concern and an economic issue. Cochran presented three options that can be pursued in such cases of widespread destruction, including removal by private homeowners, government removal through a legal process of condemnation, and private property removal from the right-of-way.

The BOCC had discussed a preference the previous week for private landowners to be responsible for their own cleanup, and Cochran indicated that some homeowners have already begun that process. A concern for this option is the fact that many of the homes in the burn area were under-insured or possibly uninsured altogether. Average costs for debris removal from a 1,500-square-foot home were given at around $50,000, an exorbitant amount for households with limited funds and inadequate insurance.

This can lead to the second option in instances of disaster, where homeowners walk away from their properties completely, finding themselves unable to afford to rebuild, let alone complete cleanup for a property that has little remaining value for them. Cochran explained that a legal procedure must then be initiated by the county, seeking condemnation of the site, after which the County can go in and remove debris. “It is the least popular option,” he indicated.

He then detailed the third option, suggested by the State, according to County Manager Kate McIntire.

Under the third option, crafted in disaster areas of California and Oregon, according to Cochran, there is a multi-step process, where the Environmental Protection Agency goes into properties to remove hazardous materials, private homeowners then move remaining debris to the right-of-way at the edge of the roadway, and local government then contracts to remove and dispose the debris from the right-of-way, reducing both responsibility of and cost to the homeowners.

McIntire shared the estimated cost for debris removal in the fire area to be $27 million. Under the FEMA program in the third option, the County would be responsible for $3-$4 million, she explained.

McIntire further suggested that, if the County continued with the first option, where individual homeowners were responsible for the cleanup and debris removal, the County could perhaps devise a program by which those uninsured or underinsured homeowners could seek support for removal costs.

Commission Chair Kristen Manguso expressed concern with any FEMA-directed program, citing extensive cooperative requirements that could place an even greater burden on the County’s resources. All three board members favored continued discussion with the state and a more “open-ended” inclusion of the debris removal issue in the letter.

The Commission did agree with the need to send the letter swiftly, hearing Cochran’s comments on the brief window in which to seek the Major Disaster Declaration. A unanimous vote was cast to approve the letter, subject to edits, and allow stamped signatures.

On Tuesday afternoon, the BOCC met with Robert Davis, Director of Community Development, to discuss helping victims of the East Troublesome fire through waiving fees associated with rebuilding.

In response to an earlier request from the Board, Davis presented a recommendation that would allow for a temporary relaxation of certain fees and processes “to facilitate the rapid rebuilding of homes destroyed by the East Troublesome Fire.”

Commissioners expressed a preference for waiving both the plan review fee and the building permit fee, provided that the new structure is within 10% or 500 feet of the size of the previous structure.

They agreed that all new structures would have to be built to current code, but that previously legal non-conforming uses would be permitted.

Conversation then took a turn when Cimino questioned whether or not waiving building fees would be helping homeowners or insurance companies. Staff was ultimately directed to do more research on what insurance would be paying for and who would ultimately be helped by waiving fees.

Discussion then turned to temporary living situations while displaced homeowners were rebuilding.

Commissioner Rich Cimino expressed a desire to allow displaced persons to live in an RV on another person’s property until they could safely return to their own. Commissioners Manguso and Merrit Linke agreed and set a permissible period as through July 31, 2021, at which time they thought landowners would be able to safely set up their RVs on their own property.

Commissioners disagreed on whether or not manufactured/mobile homes could be used as temporary residences. Grand County and many HOAs do not permit these kinds of homes and, ultimately, Manguso and Cimino agreed that it was too difficult to get people to remove mobile homes after a given period–that they could too easily become permanent.

The direction was to permit dwelling in RVs on a landowner’s property for a one-year period, with two possible extensions of one year each. To qualify for the special permit, they will need to demonstrate that they were displaced by the fire and commit to a wastewater disposal plan to either regularly dump or have black water pumped from the recreation vehicle.

For more information on Grand County’s Emergency Response to the East Troublesome Fire, go to www.co.grand.co.us/156/Office-of-Emergency-Management.