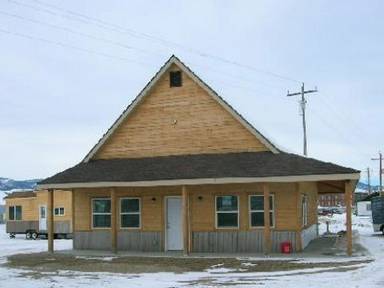 Photo: Igadl expands operations to an unincorporated parcel on the outskirts of the Town of Granby.   Photo courtesy Grand County

At their August 25 meeting, the Grand County Board of County Commissioners (BOCC) held a public hearing for a proposed retail marijuana store sited on the outskirts of the town of Granby. Located at 843 West Agate Avenue, the new store would be the first Grand County retail operation to open west of Tabernash.

Originally submitted in summer 2019, the public hearing set for November 2019 was deferred until lease issues had been resolved. An updated lease had been provided in July 2020.

Representing IgadI Ltd, David Michel updated the commissioners on their business operation, describing how IgadI provides good, middle class jobs and benefits to 40 full-time and part-time employees in Grand County. He added that, in 2019, IgadI collected and remitted over $265k in tax revenues to the county.

Michel said that the retail location just west of Granby would benefit citizens residing west of Red Dirt Hill and would also serve west Grand residents who may be traveling to Silverthorne or Steamboat Springs instead.

“A lot of people form belief systems on marijuana and alcohol. Other people don’t draw lines there. As we go forward in life, those lines can change,” said Michel. “Marijuana has made great strides. It is difficult to challenge one’s beliefs. Many people use it effectively in their lives. I would rather give people the freedom to use marijuana as they choose. This location is appropriate. I ask you to grant that freedom.”

A number of written comments, both for and against the proposed store had been received. The Town of Granby also submitted a copy of a Resolution they had adopted in opposition to the new store.

During the Public Hearing, the commissioners heard a variety of testimony from those who resided within the two-mile radius and beyond.

Granby Town Manager Ted Cherry reiterated to the commissioners that the Town’s trustees had voted in opposition of the new store because of the proximity to schools, and because local voters had opposed marijuana sales within town limits on the ballot several years prior. “This is a growth area in our town, on the outskirts of town, and we are opposed.”

Some residents echoed Cherry’s sentiments, speaking in opposition because they wanted to keep the town family oriented. Concerns that the town’s resources would be utilized to monitor and patrol the business, that the business would attract a homeless contingent and the region would become part of a “Cannabis tour route” were expressed.

Those that spoke in favor of the new store talked about the benefits of having a location closer to where they lived, eliminating the need to travel over Red Dirt Hill. Some cited the level of regulation of the marijuana industry, noting that no one under the age of 21 is admitted into the store. The onsite property owner observed that he rarely saw children anywhere in the vicinity of the proposed location. One business owner likened the new store to adding 24 new small businesses for the amount of tax revenues generated.

When testimony was finished, Commissioner Merrit Linke said, “I appreciate all the respectful comments. We have heard very passionate arguments from both sides. This is a very difficult issue and there are truly good arguments on both sides. It is not our job to be the parent. I graduated from Middle Park High School years ago. There was marijuana then. What we are here to talk about is a store.” Linke added, “We don’t make a decision based on revenue. We  make a decision about what’s right for the county.”

Commissioner Rich Cimino stated, “I have many dear, close friends that are opposed to legal marijuana. Every time this comes up, friendships are tested. It is clear how passionate you are on opposing this.” He added, “I am disappointed medical will not make this. I hope that we have medical at some time. I am relieved that Grand County remains a family friendly destination. The evidence supports that the presence of these businesses do not detract from being family friendly.” In closing, he said, “It’s about freedom for business owners. Everything seems to be in order and I am leaning toward approving this.”

Commissioner Linke motioned to approve the requested marijuana license. The motion carried 2:1, with Linke casting the dissenting vote, saying he respected the Town of Granby, his constituents and nearby businesses’ wishes.

“It’s not our job to tell people how they’re going to live,” said Manguso.

With the license granted, IgadI will begin building out the interior of the new location, which is currently unfinished. Operations will be allowed once the company meets the requirements outlined by Clerk and Recorder Sara Rosene.