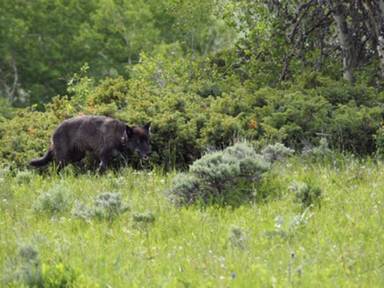 Colorado Parks and Wildlife officials confirmed that the recent wolf sighting was a male from the Snake River pack in Wyoming. The wolf was wearing a tracking collar, which was last recorded by transmission signals on Feb. 12.

Gray wolves once lived across Colorado, but the last packs were killed around 1940. While a few of the predators have wandered into the state before returning to their home ranges, gray wolves don’t have any established populations in Colorado. They do, however, call Wyoming home.

Last weekend, a community member in Jackson County, which sits in northern Colorado along the Wyoming border, told CPW they had spotted what appeared to be a dark-colored wolf wearing a tracking collar.

Rebecca Ferrell, spokeswoman for CPW, said the clear pictures combined with an obvious tracking collar made them feel pretty certain the photos from Jackson County show a gray wolf from Wyoming.

“It’s unusual, so we understand why it’s so cool,” she said. “It’s very cool for us, as well, to see something like this and be so well-documented.”

Collete Adkins, the carnivore conservation director and a senior attorney with the Center for Biological Diversity, also confirmed that the animal that CPW shared a photo of is a gray wolf — not a dog or coyote — that likely came from Wyoming. The animals lost their federal protection in most of Wyoming, but one that makes its way to Colorado would be protected under both state and federal law, she said.

“Because it’s federally protected, unless there’s some emergency situation where it was posing a risk to human life, it needs to be allowed to just do its thing and live wild and free in Colorado,” she said.

If a wolf is located in Colorado, state officials couldn’t lawfully bring it back to Wyoming without a special permit from the U.S. Fish and Wildlife, Adkins said. They’d need the permit to interact with the animal in any way.

But Ferrell said that’s not even in the cards right now. They plan to leave the wolf alone, right where it is.  “It’s not getting into any trouble,” she said. “We don’t have any reports of it being where it shouldn’t be. It’s naturally doing what it should do.”

Ferrell said residents shouldn’t worry about their safety when it comes to the wandering wolf. Like most wildlife, wolves aren’t interested in hanging around humans, she said. It’s not unusual for a wolf to wander into Colorado from neighboring states. Ferrell said CPW receives about 100 reports of sightings each year, though many are not verifiable.

Juvenile wolves often travel long distances — sometimes hundreds of miles — as they search for a pack or mate.

The gray wolf roams free in nine states including, Wyoming, Montana, Idaho, Oregon, Washington, California, Michigan, Wisconsin and Minnesota. The gray wolf population is considered “stable and healthy throughout its current range,” according to the U.S. Fish and Wildlife service. The wildlife service has proposed to delist the gray wolf from federal endangered species protection in the continental United States based, in part, on the animals population recovery.

The gray wolf, an iconic species of the American West, had all but disappeared from the landscape in the lower 48 states by the early 20th century. This constitutes one of the greatest comebacks for an animal in U.S. conservation history. Today, the U.S. Fish and Wildlife Service is re-affirming the success of this recovery with a proposal to remove all gray wolves from protection under the Endangered Species Act (ESA).

Recent pictures from Jackson County prove the gray wolves are making their way back into the Colorado landscape.