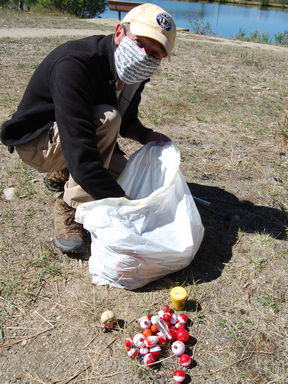 On a spectacularly beautiful Saturday, September 12, we hosted a river cleanup project on the Fraser River between County Road 8 and Rendezvous.  River Clean Up volunteers showed up at the pavilion at the Lions Ponds near Safeway at 9AM. After a few minutes of socially-distant instructions to our masked volunteers, we broke into small groups and attacked the cleanup.

Our volunteers scoured both banks of the Fraser. We looked in the willows. We waded in the river. We circled the Lions Ponds and found…much less than we expected! It’s been about three years since we last cleaned this particular stretch of river and we were delighted that we found less litter than anticipated.

We did discover some plywood, a plastic chair (with all four legs), wire, pipe, cigarette butts, fishing line, and lots of bobbers. We also found lots of doggy-doo (some of which was in bags). It’s bad enough that people don’t clean up after their dogs, but what’s up with bagging it and leaving it along the trail, people? Are you expecting the poop fairy to come by and pick it up???

Coors and Miller Lite cans seemed to be more popular this year, knocking Bud Light out of its favorite spot from our last cleanup.

TU provided lunch from Subway for all our volunteers (thanks to Dave for the great deal!) after the clean up was finished.

HUGE thanks to all our wonderful volunteers for helping us in our ongoing battle to Save The Fraser!

“We’re not a fishing club. We’re an environmental organization with lots of members who like to fish.” — Kirk Klancke, Chapter President