Mussel Boat interceptions on the rise!

Last week, Aquatic Nuisance Species (ANS) inspectors at Ridgway State Park and Horsetooth Reservoir intercepted mussel-fouled watercraft Numbers 31 & 32 of the season. If not properly decontaminated, these boats could have harmed our fisheries and potentially caused millions of dollars in damage.

Last summer, Bureau of Reclamation scientists discovered quagga mussel veligers (larvae) in neighboring Green Mountain Reservoir on August 18th and a laboratory contracted by Colorado Parks and Wildlife confirmed the discovery on August 29th. With numerous “unmanned” launch sites along this stretch of water, it was only a matter of time before this occurred.

At Lake Powell, in southern Utah, quagga mussel populations are expanding at a previously unprecedented rate. What’s happening at Lake Powell is completely unlike the experience of natural resources agencies in the Great Lakes during the late 80s or Lake Mead a decade ago when those waters were infested. Up until this point, Lake Powell watercraft were considered at high risk if moored in the water, while day-use boats were considered a lower risk to their next water. However, this year, there are rafts of adult mussels floating throughout the northern half of the reservoir. A recent inspection found one boat with mussels attached after less than half an hour in the water.

Here in Grand County, there have been no reports of mussels on boats launching or taking out of our lakes this summer, although operating hours and limited locations of boat inspection stations has been a much-discussed, hot topic. Budget constraints have resulted in limited operations and, to the disappointment of many, an early closure mid-October has been confirmed. All of this to prevent an infiltration of quagga and zebra mussels in our local waters. Like it or not, we need these inspections to prevent the pests from moving into our lakes and streams.

What are Aquatic Nuisance Species?

Aquatic Nuisance Species (ANS) are aquatic plants and animals that invade lakes, reservoirs, rivers and streams. Examples of ANS include:

​ANS can also include fish pathogens and diseases, such as viral hemorrhagic septicemia (VHS) or whirling disease. ​

Zebra mussels are native to the Black, Caspian and Azov Seas of Eastern Europe.  They were discovered in the Great Lakes in Lake St. Clair in 1988 and have since spread to 33 states in the United States.

Quagga mussels are native to the Dnieper River Drainage in the Ukraine. They were discovered first in the Great Lakes in the Erie Canal and Lake Ontario in 1989 and have since spread to 27 states in the United States.

How did they get here?

Many aquatic nuisance species, including zebra and quagga mussels, have been introduced into the Great Lakes in the discharged ballast water of ocean-going ships.  Another method of dispersal from Europe to the United States is believed to be through transportation of attached mature adults on anchors stored internally in compartments on transoceanic vessels.  Once in North American waters, aquatic nuisance species often hitch rides to other bodies of water on the boats, trailers, and equipment that people transport from place to place. Boaters and anglers can inadvertently transport ANS on waders and in bait buckets and live wells.

Zebra and quagga mussels likely made their way to the Western USA on trailered watercraft.

The first discovery west of the 100th Meridian was in Lake Mead in 2007.  The invasive quagga mussels found in Lake Mead in 2007 were 1,000 miles farther west than any other known colony of quagga mussels at the time. The primary method of overland dispersal of these mussels is through human-related activities, especially trailered watercraft. Given their ability to attach to hard surfaces and survive out of water for extended periods [up to 30 days!], many infestations have occurred by adult mussels hitching rides on watercraft. The microscopic larvae also can be transported in bilges, ballast water, live wells, or any other equipment that holds water. 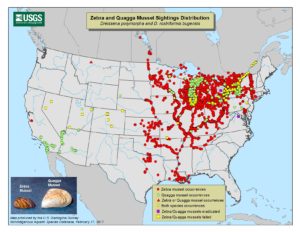 Quagga mussels (Dreissena bugensis) and zebra mussels (Dreissena polymorpha) are small freshwater bivalve mollusk-animals with two shells.  They are relatives of clams and oysters. It is very difficult for a non-expert to tell the two species apart. The shell color of both mussels alternates between a yellowish and darker brown, often forming stripes.  Color patterns are highly variable and can be attributed to environmental factors. They range in size from microscopic up to about two inches long. Unlike native North American freshwater mussels, which burrow in soft sediment, adult zebra and quagga mussels can attach to most hard and semi-soft surfaces via tiny threads called byssal threads.  Native species do NOT have byssal threads! These byssal threads are one of three main invasive characteristics that give zebra and quagga mussels an advantage over natives, along with rapid reproduction and their ability to filter feed at amazing rates.

Where are they found?​

Both zebra and quagga mussels can survive cold waters, but cannot tolerate freezing.  They can endure temperatures between 33⁰ – 86⁰F. Zebra mussels need waters above 54⁰F to reproduce, while quagga mussels can reproduce in waters as cold as 48⁰F.  Adult mussels are light sensitive and prefer to live in water around 200 to 300+ feet deep. They are able to live in a wide range of conditions including oxygen-depleted water.

There are no waters positive for zebra or quagga mussels in Colorado. All waters have been de-listed following five years of no detections per Western Regional Panel standards.

What are the Impacts?

Zebra and quagga mussels pose a great ecological and financial threat to the state.  The invasion of these mussels can affect every Coloradoan and visitors in some way and the impacts could be devastating.​ Potential impacts include:

Help ​​prevent the spread of zebra and quagga m​​​​​​​​ussels! ​You can help stop the spread of Aquatic Nuisance Species (ANS) in Colorado and the West!

Before entering, and, when leaving any waters, always:

​Clean: ​​Remove all plants, animals, and mud. Thoroughly wash everything: boats, trailers, vehicle hitches, and motors. Aquatic plant fragments and animals can hide in mud and survive many days out of water. Be sure to clean all fishing equipment including waders and boots.

Dr​ain: Completely drain every space or item that could hold water, including live wells, bait containers, ballast and bilge tanks, and engine cooling systems. Leave the bilge plug out during transport and any time the watercraft is not on the water.​

D​​ry:Allow sufficient time for boats and equipment to dry completely before launching in other waters.

Disp​​ose: Properly dispose unused live bait into trash containers, not into the water. Properly dispose of aquarium or classroom animals or plants, do not place them in any body of water or natural setting.

Repo​​rt: If you find anything that you think is an invasive species on your boat or in a water body, report it​ to Colorado Parks and Wildlife by calling (303) 291-7295 or emailing Invasive.Species@state.co.us.