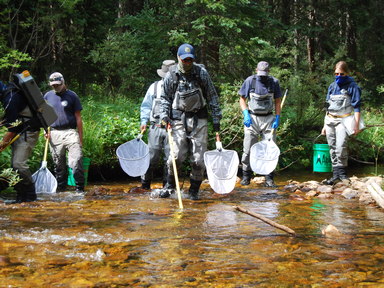 During the midst of the pandemic, Colorado Parks And Wildlife sent fisheries biologist Jon Ewert and a team of masked CPW staff and volunteers to Grand County to count fish. Team members from CPW were Jon Ewert, Dan Kowalski, Eric Fetherman and Cole Brakhage. Team members from CSU were Tawni Riepe and Brian Avila.

Electroshock on the upper Fraser River brings some healthy native trout to the surface along with a collection of sculpin. Photo by Jerry Nissen

Fishing is a big deal in Colorado. It’s estimated that fishing has a $2 billion economic impact in Colorado in a typical year, and we’re not in a typical year. The pandemic has pushed people from concerts, restaurants and barbecues to our parks, rivers and wild places. It will be revealing to see what the analysts tell us about our outdoor recreation patterns during the pandemic when it’s finally over. Those of us who live here have seen the crush of people in our great outdoors and on our rivers!

Which brings us back to fish. A careful annual inventory of fish is an excellent way to use actual science and data to learn much more than just “this a good place to catch fish.” Having a trained fisheries biologist carefully wading through a stream with a giant battery on his back, a ground wire trailing behind him and pole with an electric loop in the water in front of him to stun fish allows us to learn a lot.

What kinds of fish are in this exact part of the river? How big are they? How does that compare to previous years? Are populations growing or shrinking? Is one species gaining while another is declining and what is the successful reproduction rate by species? How are the different species growing year over year? What does the survey team see around them as they wade through the river? What does all that tell us about how this precise slice of the environment is changing? Are the right land management strategies being employed? How is the habitat performing over time? What works best and what can be improved? If the environment really is changing what can (or should) we do about it? Those are just some of the questions an electro-fishing survey helps to answer.

The actual survey is fascinating and fun to watch. Electrofishing stuns the fish for a few moments, allowing the team to net them. The fish are weighed, measured, and their species is noted. This is all carefully recorded before they’re returned to the river unharmed.

Cutthroat trout were stocked in this area in 2019. This year’s survey pointed out that the typical cutthroat here grew about 2” since last year. That’s not a tremendous amount of growth, but this high in the basin water temperatures are cold and fish growth is expected to be slow. The numbers of fish were promising.

CSU PhD candidate Tawni Riepe is studying the effects of Bacterial Kidney Disease, which has been found in the Brook Trout inhabiting the Fraser. Her research aims to determine how much the disease affects fish populations, and whether or not Brook Trout can infect Cutthroat Trout that live in the same waters. Some of the captured Brook Trout were dissected to sample for the disease, while the Cutthroats were wiped with a special swab which is placed in an individual vial so it can be tested in a non-lethal manner. . Researchers hope to learn if this non-lethal swab test will reveal the presence of the disease-causing bacteria.

This team started their annual inventory on August 31 on the Fraser River near the Robber’s Roost Campground close to the entrance of the Mary Jane Ski Area. When the survey is finished on September 4, six distinct sections of the Fraser between Robber’s Roost and Windy Gap near Granby at the Fraser’s confluence with the Colorado will have been surveyed. 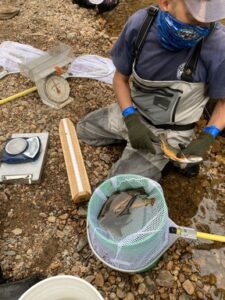 The area in Monday’s survey is above Robber’s Roost below the last hairpin on the Grand County side of Berthoud Pass. It’s the headwaters of the Fraser. In many places here, the Fraser is only a few inches deep and a few feet wide. It’s fragile. The fish we found were all under about 10” with most in the 2-5” size range.

The information is carefully compiled and compared to the results from the same segments of the stream in previous years. Results of the analysis influence decisions about where and how many of each species to stock in a given area and more. Another element of the survey is “habitat project performance” evaluation. This helps CPW determine if previous habitat projects in a given area yielded positive results and how they should move forward.

Much of the traction sand used during the winter on Berthoud Pass is now captured before reaching the Fraser. Unfortunately, sand deposits were prominent in many places in the river again this year. Those sand deposits are washed from the highway into the river by spring snow melt and settle on the river bottom. The sand coats the river bottom, stifling growth of the natural bug life (macro invertebrates) that trout and other animals need to survive. We’ve made great progress in keeping traction sand out of the river, but more can be done.

Sand in the upper Fraser does raise an interesting possibility. Brook trout have become the dominant trout species in this portion of the Fraser. It wasn’t always that way. Cutthroat trout were prevalent in the past and one possibility that is being studied is the impact of sand on the balance of those two species.

CPW fisheries biologist Jon Ewert and others are looking at the data gathered on the Fraser to see if sand may actually help cutthroats re-establish a foothold here. They’re evaluating the possibility that the success rate of spawning by Brook Trout (fall spawners) may be reduced compared to the success rate of cutthroats (spring spawners). The hypothesis is that the cutthroat’s timing may allow more sand to be washed away before spawning resulting in greater reproductive success.

We’ll have an indication of that theory’s validity in a few years. Stay tuned for science in action!

In one example of CPW’s targeted habitat projects, Trout Unlimited worked under the guidance of CPW to help restore several portions of the Fraser by planting willows along its banks. The goal is to reduce erosion, stabilize river banks and provide shade. Strategic plantings of willows by TU have had great success for the past few years. TU’s planned willow planting for 2020 was delayed until spring of 2021 due to the pandemic.

Remember in these days of the pandemic to always practice safe “fishtencing”!