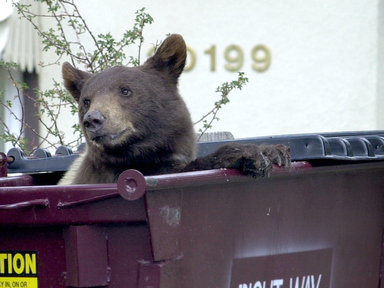 Colorado Parks and Wildlife (CPW) has received over 3,800 bear-incident reports since April 1, most involving bears trying to access food sources. The number of reports is expected to grow in the next few weeks as bears enter hyperphagia, the period of preparing for hibernation when bears spend up to 20 hours a day on the hunt for 20,000 or more calories.

A restaurant employee in the Winter Park area was fortunate to receive only minor injuries on Thursday, August 29 from a bear that was hiding in the business’s dumpster. The startled bear swatted the employee on the head when surprised by the employee dumping that evening’s trash. Though the bear was repeatedly seen by the restaurant staff and other locals on a regular basis, no reports were made to CPW to help try and haze or remove the bear from the area until after the incident was reported.

“We all know that when bears have easy food sources, they will keep coming back to them,” said JT Romatzke, Regional Manager for CPW’s Northwest Region. “It’s not so much a bear problem as a human problem when we don’t prevent bears from finding easy meals, and also when we accept bad bear behavior as normal. We need people to call us early and often when bears become a nuisance, instead of waiting for a worst-case scenario.”

CPW officers monitored the area after the incident, and the bear returned as expected. Officers say the animal was extremely habituated and demonstrated no fear of wildlife and police officers on the scene. Because of the attack and the dangerous behavior, CPW officers put the bear down.

“In this case, there was a clear pattern of where and how the bear was moving each night, but people in the area had the attitude that it was normal for bears to get into trash,” said Romatzke. “It took a person getting injured for someone to finally call us. By that point, this bear was so conditioned to getting food that it had become dangerous. We need people to understand that you are not doing bears any favors by not calling us; we can work together to prevent these animals from becoming dangerous in the first place if we get a report.”

Not reporting bear incidents is unfortunately not unique to one interaction or area. Several recent human-bear interactions have been the direct result of bears being conditioned to human food sources when residents and businesses accept bears getting into trash and don’t take the steps to secure waste nor call CPW when bears repeatedly return.

Because most human-bear interactions are preventable, CPW echoes the frustrations and concerns of those who become upset when these animals face consequences because of problems people have caused. Keeping communities safer and bears away from attractants requires a partnership between CPW, community businesses and residents making a commitment to using dumpsters and trash cans specifically designed to keep bears out. Though often used with the best of intentions, modified dumpster lids, raccoon-proof cans, and self-rigged options are simply not sufficient to keep bears out of trash.

“We become wildlife officers because of our love for Colorado’s wildlife, and putting down an animal is one of the worst parts of our job,” said Romatzke. “It’s frustrating, because we don’t want to see bears put down any more than our residents do. But if people, or even our trash companies, aren’t putting in the effort to be Bear Aware and help us out, these types of conflicts will keep happening.”

When Coloradans refuse to follow these common-sense principles, bears become habituated to seeking out meals from homes and populated areas. When bears are habituated, as in this case, they often lose their instinctual fear of humans, which can lead to increased risks to human health and safety.