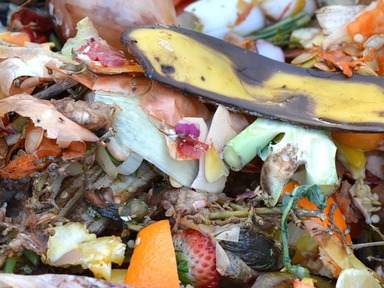 One of the easiest ways to help reverse our carbon footprint and revitalize the earth, composting reduces the amount of waste sent to the landfill and produces a product that provides much-needed nutrients for the soil.

According to the Association of American Plant Food Control Officials (AAPFCO), “Compost is the product manufactured through the controlled aerobic, biological decomposition of biodegradable materials. The product has undergone mesophilic and thermophilic temperatures, which significantly reduces the viability of pathogens and weed seeds, and stabilizes the carbon such that it is beneficial to plant growth”.

The right combination of green and brown, carbon and nitrogen-based materials yields beneficial results, but doing it at 9,000 feet above sea level has its challenges. To compost successfully, you need the right mix of materials, moisture, living organisms such as worms to help aerate, it must be turned regularly, and, you need to keep the bin or pile from freezing.

Since most people don’t have room (nor the desire) to compost inside their homes, there aren’t as many people composting here as there could be. Instead, much of the waste that could be composted is hauled over Berthoud Pass to a landfill in Erie at a cost of over $100 per ton. According to the CDPHE, 37.1% of landfill waste is compostable. In Grand County, community composting at a designated location(s) could be a solution to this challenge.

Vice President of A1 Organics and board member of the US Composting Council, Speaker Bill Yost has helped neighboring Summit County with the development of the Summit County Resource Allocation Park, a composting facility located at the county’s landfill site. With over 29 years of experience with composting, Yost led the group through a presentation covering all aspects of Organics Diversion.

“In order to create healthy compost, you need a 40:1 ratio of carbon and nitrogen materials and about 60% liquid”, said Yost. To end up with a high-quality organic product, materials accepted for processing should also be a mix of clean green, herbivore, wood and yard waste.

The benefits of compost use include improved soil structure, moisture management, added organic matter and soil carbon. It modifies and stabilizes pH, reduces toxicity in acid soil, supplies nutrients and suppresses plant diseases. “Nature can heal itself unbelievably, if you give it a chance”, said Yost. “Soil needs organic matter to be healthy.”

Yost went through the main commercial methods of composting: 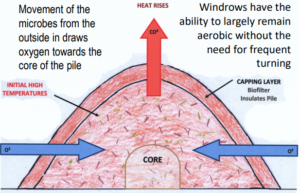 Of the options listed, Yost told the group the MSAP® method would be the most successful and cost-effective. Developed by A1 Organics and Harvest Quest, the MSAP® method composts from the outside in. When the Harvest Quest inoculant, which contains microbes, is added, it initiates a unique phenomenon that reverses normal composting physics. Instead of heating up in the middle, the outer edges heat up first as the microbes multiply and work their way from the outside inward. The method provides sustained pathogen temperatures and requires far less turning. Using the MSAP® method, pathogen destroying temperatures can be sustained for 30–45 days with only two turns. It reduces odor, volatile organic compounds (VOC), ammonia and dust emissions and also reduces fuel and labor costs significantly. The best part is that, with an accelerated curing process, less land is needed to produce the same volume of compost.

As previously mentioned, the resulting product could be sold, essentially returning it to the local ground from which it came, but proper infrastructure would need to be put in place. “This would create a whole new industry in the valley”, said Infinite West president, Tom Harris.

In the very preliminary stages of discussion, the next points of consideration become “where do we put it?” and “how do we pay for it?”. Yost told the group, with local zoning and state permitting requirements, it would take 12-14 months to get through the process. He also told them there is grant money available for these initiatives. Yost suggested looking at a pilot project at a location that could be expanded in the future.

The discussion went an hour longer than scheduled as the group talked through ideas including potential locations of drop off points in Fraser and/or Granby and possibly setting up a pilot project at the existing Kremmling landfill, which is closed, but still permitted.

Infinite West will also be contacting the Colorado Department of Health and Environment (CDPHE) to discuss the possibility of creating a Pilot project, which can be run for up to two years to gather evidence for a long term facility. By gathering compost marketing information, research on viability and information necessary to create an Engineered Design and Operations Plan, composting could become a permanent community option in just a few years.

To learn more about the benefits of composting, visit: ecocycle.org/backyard-composting and kisstheground.com/thecompoststory/.