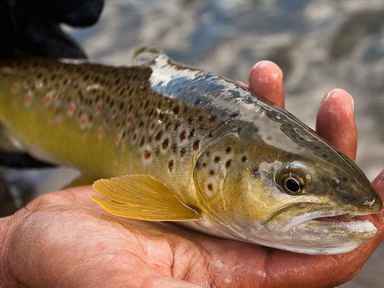 Low streamflows and warm days are threatening the health of trout in the Colorado River in Grand County as daytime water temperatures have risen into the harmful range of 60 degrees-plus F. The Colorado River District is partnering with local officials and federal agencies to increase to cool the water and ease pressure on fish populations.

The US Fish and Wildlife Service, the US Bureau of Reclamation and the River District just bumped up flows in a critical stretch of the river by 35 cubic feet a second (cfs), nearly doubling river flow to 75 cfs. The water is being released from Granby Reservoir from storage normally dedicated to boosting flows for endangered fish in the lower reaches of the Colorado River near Grand Junction.

The Colorado River District is employing its Wolford Mountain Reservoir near Kremmling as a storage vessel for the trout water, so it can be later used for the endangered fish, its original purpose. This makes the gamefish-endangered fish tradeoff possible.

“Thank you for stepping up and offering the space in Wolford to accommodate the exchange,” said Ed Moyer, the Grand County Assistant County Manager who is the county’s lead on water issues. “This will help decrease temperatures in the Colorado River between Windy Gap and the Williams Fork River.”

This segment of the river near Hot Sulphur Springs is sensitive to low flows and high temperatures due to transmountain diversion operations that move water from the west side of the Continental Divide to the Front Range, thus reducing local flows. Once the river descends past the confluence of the Williams Fork River, flows increase, as they do again after the confluence with the Blue River and Muddy Creek.

The River District in recent years has been a catalyst and a source of stored water releases that benefit wildlife, recreation, power production and irrigation needs. In the poor water year of 2018, it used water stored in Ruedi Reservoir in Pitkin and Eagle counties to help flows in the Roaring Fork River that later benefited endangered fish, power production and agricultural production in the Grand Valley. It also encouraged local entities who own stored water in Ruedi to do the same.

Then this past winter, River District water in Ruedi was released into the Fryingpan River to help prevent anchor icing.

“For more than 20 years, the Colorado River District has assisted recovery efforts for endangered fish by building dedicated pools of storage at Wolford Mountain and Elkhead Reservoirs. These reservoirs also assist municipal, industrial and agricultural water users,” Mueller said. “In today’s age, we are finding creative ways to dedicate stored water to even greater environmental good that also benefits other water user segments.

“This is yet another example of how the Colorado River District works to protect western Colorado water and West Slope water users, which we’ve been doing since 1937,” Mueller said.