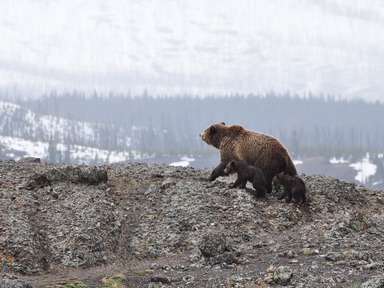 Colorado Parks and Wildlife (CPW) has already received reports of bear activity in eight Colorado counties in 2020. With spring upon us, CPW reminds citizens that bears are emerging from their slumber and beginning their search for food.

Early season natural food sources for bears include grasses, aspen buds and other vegetative matter that is beginning to sprout. Those gentle food sources, which are the first crops available to them, help a bear’s digestive system and metabolism adjust back to normal after not consuming anything for months.

For the health and well-being of Colorado’s black bears, wildlife managers say bears should NOT be eating from trash receptacles, bird feeders or other human-provided food sources around homes.

“Every time a bear gets a treat, a bird feeder, a hummingbird feeder, trash, it teaches the bear that people mean food,” said Mark Lamb, CPW’s Area Wildlife Manager for South Park and the west Metro Denver area. “People who think that it’s one time, no big deal, are totally wrong. It is a big deal when you compound that ‘one time’ with how many ‘one time’ they get from your neighbors, too. It adds up.”

Some of the early season bear reports have been from simple sightings in Boulder and Morrison, to bears already getting into trash in Steamboat Springs and Silver Plume. Reports also include a bear getting into a vehicle in Snowmass Village, bears with livestock in Delta, and a bear vs. dog encounter under a deck in Colorado Springs.

Typically, male (boar) bears come out of hibernation first followed by females (sows) without cubs. Females that gave birth to cubs over winter in hibernation dens are the last to come out, usually in mid-to-late April.

Last year, CPW received 5,369 human-bear incident reports with nearly a third of those involving bears in trash. Wildlife managers are hoping to see a reduction in negative human-bear interactions across the state. However, that does not mean that people should stop reporting bear incidents to CPW. The earlier wildlife managers know of conflicts, the more tools they have to help keep small problems from growing into bigger and even dangerous scenarios.

“Our recommendations aren’t made to make our jobs easier,” explains Matt Yamashita, Area Wildlife Manager in Glenwood Springs. “What we’re asking is what is best for bears and for people. We don’t want to deprive people of seeing bears, but we want people to see a bear that doesn’t depend on humans for food.”

Bears are omnivores and primarily eat vegetation such as grasses, forbs, berries, acorns and seeds – food sources that span their waking seasons. But if natural food becomes scarce, or if human-provided food is easy to access, bears will begin looking in residential areas for their next meals.

Biologists are seeing bears that are shifting much of their life cycle toward communities. When a high-country berry bush yields a few hundred calories and a dumpster gives up thousands of calories via leftovers and greasy goodies, the bears will make the easy choice. Once they’ve made that choice they are instinctively trained by their stomachs to search out the easy option.

Lamb and Yamashita agree that bringing these large, territorial animals into areas with people is a recipe for human injury and bear death. While a nuisance bear getting into trash might be relocated if caught early, a bear that injures a person is put down.

“The bear is always the ultimate loser,” Lamb concludes.

“We have to do better as communities,” Yamashita urges.

Though most human-bear interactions occur in the late summer and fall months, a late frost or prolonged dry weather could lead to localized natural food failures, pushing black bears to be more persistent in their search for human-food sources. Being bear aware not only protects your home and property, but it can save a bear’s life.

Tips to prevent human/bear conflicts include:

For more information about Living with Bears in Colorado, visit https://cpw.state.co.us/bears.