Bear injured in summer fire near Durango back in the wild 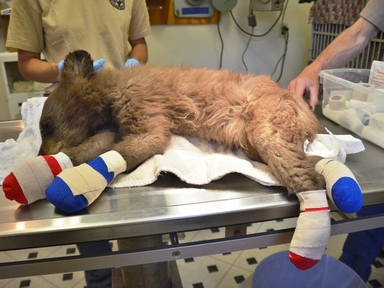 The bear cub injured in the 416 forest fire in southwest Colorado last summer is now back in the wild, hibernating in a “den” in the mountains west of Durango. 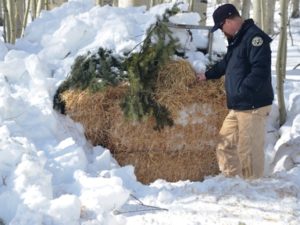 On Friday (Jan. 25), the bear and another female cub orphaned in the Durango area were placed together in an ideal location — deep in the forest where they’ll find plenty of food when they wake from hibernation.

Colorado wildlife officers captured the bear on June 21, 2018, after receiving reports from firefighters that a cub was wandering alone in a burn area about 15 miles north of Durango. The bear was then taken to Frisco Creek, the wildlife rehabilitation facility operated by Colorado Parks and Wildlife near Del Norte.

“Black bears are an important native species in Colorado,” said Matt Thorpe, area wildlife manager for the Durango area. “Taking it to rehab and giving it a second chance of surviving in the wild was the right and humane thing to do.”

Photos of the bear went viral last summer and media around the world reported the story.  The bear’s feet were badly burned and her mother had not been seen in the area; she was born early in 2018 and weighed only about 10 pounds when captured. At Frisco Creek, Michael Sirochman, veterinary technician and manager of the facility, applied dressings to the bear’s feet and wrapped them in bandages a few times each week. The young bear healed quickly and within a month she was ready to go outside with other orphaned cubs.

The primary purpose of wildlife rehabilitation is to mimic, as much as possible, the conditions an animal will face in the wild to prepare it for a successful release. So, for bears at Frisco Creek that means that contact with humans is minimized. Bears live in a secure enclosure with other bears which helps them to develop physically and socially. Large tree branches, stumps, boulders, platforms and metal shelters allow the bears to develop the skills they need to survive in the wild. 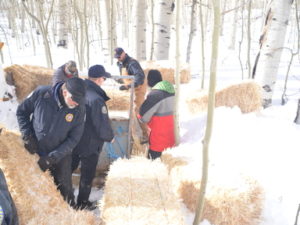 The bears are also fed in a way that imitates life in the woods. During summer and fall in the wild, food is abundant and bears eat almost constantly in order to put on the fat they need to get them through the winter. At Frisco Creek they were fed generously and the 12 cubs at the facility all grew to about 100 pounds.

As the weather cools in the fall, the amount of food available to bears in the wild declines ‒ that also provides a signal that the hibernation season is near. So at Frisco Creek the quantity of food the cubs were given was cut back and eventually cut off.

In early January, the cubs settled into hibernation in the metal containers they’d used for shelter and where they’d slept and hid. The containers – about 4-feet square – became their dens.

On Friday (Jan. 25) the “den” of the 416 bear and her companion was closed and taken by truck to the remote trail head where it was loaded on a snow-cat and hauled deep into the mountains. At the location selected by wildlife officers, the den was placed and covered with hay bales, pine boughs and snow. Within a few weeks a wildlife officer will go back to the site and remove the den door. Bears usually emerge from hibernation in mid-April.

“We’ve found that putting bears into hibernation before moving them has been pretty successful,” Sirochman said. “They are fat enough to survive the winter and have their familiar home. We try to re-create the natural conditions as much as possible.” 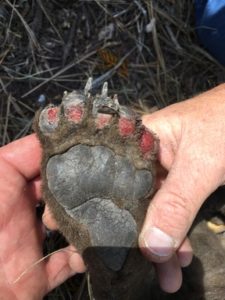 The once 10-pound, injured, orphaned bear cub now weighs 90 pounds. When the weather warms, she and her crate mate will emerge into good black bear habitat ‒ and they’ll be wild bears again.

“Making it in the wild is tough for young bears,” Thorpe said. “We’ve done everything we can to give the 416 bear a second chance at a good wild life.”