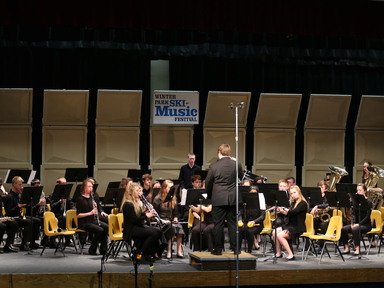 Over the next three weeks, the Fraser Valley will host several thousand participants of the Winter Park Ski-Music Festival. These talented students come to the valley to perform and compete from around the country and the globe, and, they’ll also experience recreational opportunities while they’re here. This year, we’ll host students from Colorado, Kansas, Nebraska, Texas, Missouri, and, Oklahoma. In years past, students have come from as far away as Norway and Ecuador.

Festival organizers arrived earlier this week, and, I had the opportunity to speak with Festival Director, Christopher Jones, son of Festival founder, Jae Jones. He told me that they are “very excited to bring the students to the mountains to give them the opportunity to enjoy winter sports and recreation, in addition to their musical performances”. He said it’s always a “great thrill” to see the student’s faces as they come across Berthoud Pass, some students having never seen mountains or snow before. Jones estimates that between 87-90% of the students have never skied or snowboarded prior to attending the Festival.

The Winter Park Ski-Music Festival was started by Jae, a band booster mom, who thought it up when her two sons were members of their high school band program. During those years, their band traveled to Durango twice, Corpus Christi, Colorado Springs, and Orlando. Jae’s brother, Don Smith, had moved to Grand County when he accepted the position of Middle Park High School Principal in 1969. Smith began his career as a band director in Texas, and later at Westminster High School in Colorado. In 1987, Jae and Don began discussions of creating a music festival for high school bands, offering the unique recreation of skiing, which no other music festival provided at the time.

A change of career led Smith into real estate, property management, and land development and he worked to attract visitors to the community through planned travel getaways.  Smith knew the value and benefits of bringing tourism to Winter Park. When his own nephews were traveling to other “less adventurous” travel destinations, he was certain Winter Park could attract an ever-increasing music student travel market.  Consistent snowfall, a recreation-filled world class ski resort, abundant supply of lodging and an entire community willing to embrace new business, the choice was easily Winter Park.

The following year, the first Winter Park Ski-Music Festival was held.  Over the next few years, high school choirs and orchestra programs were also invited to attend, and all types of school music programs are now part of the festival competition.

This year, the festival will have 30 different schools represented, with around 2,000 student musicians, directors and chaperones attending.  Attendance was significantly impacted by the hurricanes of southern Texas and Florida, which affected families, schools and travel budgets. Over the past 29 years, the festival has hosted over 154,000 band, choir, and orchestra students come to Winter Park Ski- Music Festival to compete and recreate.

Keith Sanders, of Beavers Sports, said “This is an amazing event for the community. It is one of the most ‘under the radar’ events that our community participates in, bringing thousands to our environment during an otherwise slow period” of the winter season. “It is a unique event that gives those that may have never been exposed to snowsports the opportunity to try skiing or snowboarding, to challenge themselves and perhaps change their lives”. Sanders recalled a group of choir students that came in the shop and began singing, to the delight of everyone in the store, and added “They’re a very talented group of young people and we are happy to have them here”.

Festival Coordinator, Jess McDowell, told me “There is something magical about this festival. The look on the kids’ faces having never seen snow, let alone mountains, never gets old for us.” Jess told me one of his favorite festival memories was when they welcomed their second international group from Ecuador. He said “We didn’t know what to expect musically, but we will never forget the energy in the room when they started playing on stage. It was electric!”. Furthermore, it exposed music students from the US to some amazing Latin music. It was a cultural exchange that was “very memorable”.

Chris Olivier, of Ski Broker, said, “We are excited once again to welcome the Winter park Music Festival participants to Ski Broker and the Fraser Valley! This event is so amazing. Christopher Jones and his team do so much for the area by bringing in this event.  So many young people are exposed to skiing, outdoor recreation and the Fraser Valley through the festival, which is great!”

Katherine Mowrey, of Epic Mountain Sports, told the Winter Park Times “It’s always fun introducing these kids to the great sport of skiing. So many of them have never even seen snow, so we are sure to talk about the details with them”. Mowrey went on to say “It has been a pleasure working with Chris and Patrick, and before that, with Jae, the past 18 years. They are a very dedicated group and, being Red Raider alumni, we have a special Texas connection!”

Chris Jones remembers when the Festival only offered students the option of skiing, adding snowboarding later. Now, for students that don’t wish to ski or ride, they have options of snowshoeing, snowcat tours, tubing and other activities. Jones said the expanded offerings have increased student attendance at the annual event, because no one is excluded. They have multiple opportunities to experience outdoor adventures.

McDowell said they “would love to give a shout out” to everyone who helps make this event successful, year after year. “The staff at Middle Park High School and East Grand School District, Winter Park Resort, Cooper Creek Square, the town of Winter Park; local ski rental shops, lodging providers; the ski and snowboard instructors, and many, many more, too numerous to mention.”

As the valley rolls out the red carpet to this year’s Winter Park Ski-Music Festival participants, teachers, chaperones and festival staff, we hope their stay is enjoyable, they make memories that last a lifetime, and they return to our valley with their families in the future. To learn more about the festival, visit: winterparkskimusicfestival.com