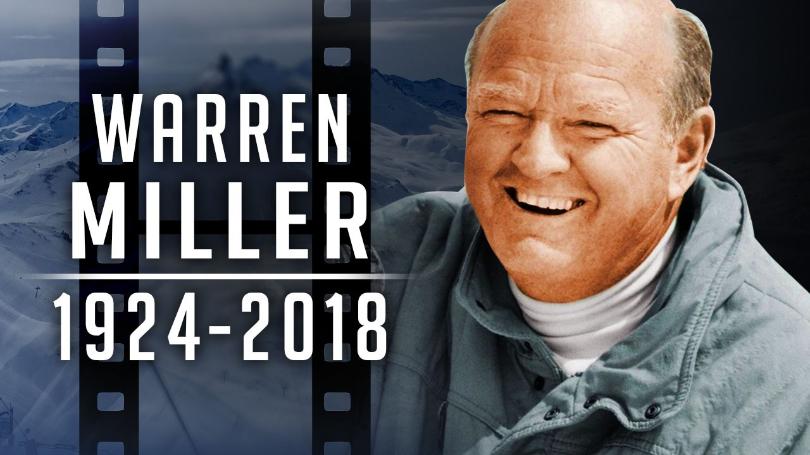 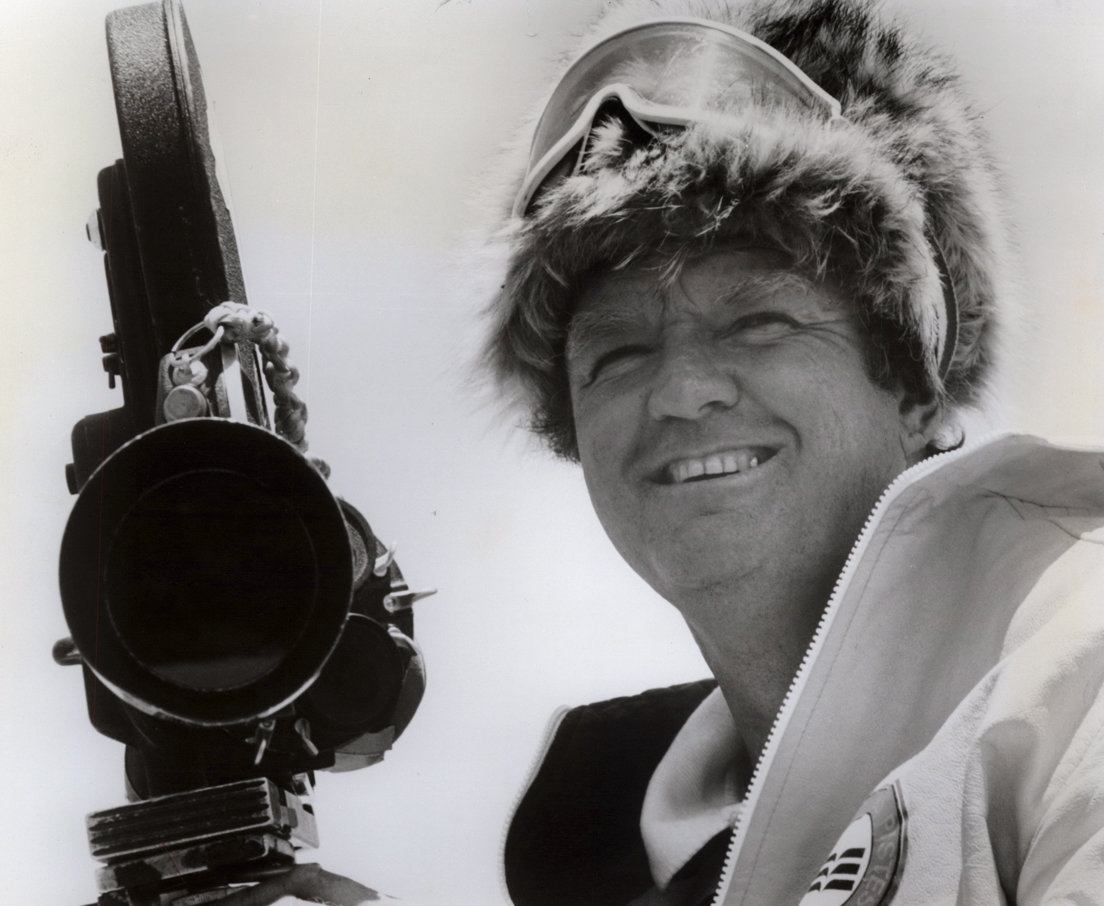 Warren Miller was a passionate skier, surfer, sailor, world traveler, author, cartoonist, public speaker and filmmaker whose movies introduced skiing and snowboarding to a vast, worldwide audience. We were saddened to learn that he passed away last week at his home on Orcas Island in Puget Sound, near Seattle. He was 93.

The name Warren Miller is synonymous with winter sports. If you’ve ever laughed at a film collage of skiers tumbling over each other trying to get off of a ski lift, witnessing the lift attendant’s subsequent actions, trying to help the skier(s) get up, and, even picking up the rider’s equipment and hucking it far, far away from the lift landing, you’ve seen, at least, one of his films.  The condo or house where you live or are staying now probably has at least one, if not a collection, of his annual film classics on VHS. The classics that he produced and released every year for the past sixty, or so, shared the thrills and freedom of skiing as well as other outdoor adventures.

Since 1949, Warren Miller’s films have provided early season “stoke” to generations of skiers and riders around the world. For a handful of years, the old Silver Screen Cinema in Winter Park was the first Colorado stop on the annual film tour. No matter where you are, you know winter is on it’s way when the new Warren Miller film is playing.

Born October 14, 1924 in Hollywood, Miller’s childhood was less than glamorous as the Great Depression took its toll on his family. “Rather than face the fact that my family was very strange, I made the assumption that the way our family lived was much the way that every family lived” he recalled in his 2016 autobiography. He began working at the age of 8 and took every opportunity he could to spend time outdoors. He body surfed in the Pacific Ocean near Topanga Canyon, went hiking with his Boy Scout Troop in Yosemite N.P., and, built a surfboard so that he could surf at San Onofre. He bought his first camera for 39 cents in 1936, taking pictures of his fellow Boy Scouts and selling them the prints.

He bought his first pair of skis for $2 with money he had earned from a paper route, and, after reading “Downhill Skiing” by Otto Lang, he headed up to nearby Mt. Waterman to test his skills. He was hooked on the sport from that moment forward.

Warren attended the University of California, and, as World War II progressed, he enrolled in USC’s Officer Training program. During his WWII tour, he was onboard Sub-chaser 521 when a typhoon sank the ship off the coast of Guadalcanal. He helped devise a plan to safely evacuate the crew and get them to the safety of a nearby ship.

At the end of his military engagement, he purchased an 8 mm Bell & Howell camera for $77 and went on a ski-bum tour with his friend, Ward Baker. Pulling his famous tear-drop shaped trailer to locations such as Mammoth, Aspen, Alta, Jackson and Sun Valley, they set up camp in the resort parking lot. He described the trailer’s inside temperature to be the same as it was outdoors, but they managed to get by on a diet of oatmeal cooked with frozen milk on a Coleman stove, ducks, rabbits, and, homemade “tomato bisque” which was made of ketchup mixed with hot water and as many oyster crackers as they could lift from the nearby lodge.

He began filming winter escapades in the winter of 1946, teaching himself how to edit the hundred foot rolls of film as he went. In 1950, after many attempts to market his films, Southern California’s Ski Club Alpine offered Warren a venue to show his first feature “Deep and Light”.

Along the way, he faced adversity as he watched his young wife, Jean, mother to his 18-month old son, Scott, die from Spinal Cancer in 1953. During this time, Miller lost most of his hair and gained 35 pounds.  Over the course of his life, Miller married five times, finally “getting it right” by marrying Laurie, his wife of 30 years, in 1988.

Warren’s films grew in popularity during the 1950’s, and, by the 1960’s, he had established film company headquarters in Hermosa Beach, CA. In addition to his annual film epics, Warren also produced promotional films for the ever growing list of new resorts, including Vail, Telluride, Sun Valley, and, Snowbird, with 500 films in his credit.

Warren’s goal was to entertain and inform his audience, always truthfully and with a touch of his trademark humor. Watching his films made you feel like part of the action, and, part of the family. He traveled around the world, seeking to film wherever they could find snow. His travels led him and his crew to far off places like Russia, Israel and China in times that weren’t the safest. He filmed such early skiing pioneers as Emille Allais, Otto Lang, Stein Eriksen, Jimmy Huega, Billy Kidd and Jean-Claude Killy. He also captured Mike Wiegele heli-skiing, Wayne Wong’s twisting and twirling and Scot Schmidt’s first extreme skiing runs.

Over the years, Miller coined a number of great inspirational quotes, including “A pair of skis are the ultimate transformation to freedom”; “If you don’t do it this year, you’ll just be one year older when you do”;  “How old would you be if you didn’t know when you were born?”; “Adventure is the invitation for common people to become uncommon”, and, “The best place in the world to ski is where you’re skiing that day”.

By the mid-1980’s, Warren began working on cutting back his busy schedule, and, in 1989, he sold his film company to his son, Kurt, and his partner, Peter Speek. They kept the company going for another 12 years, at which time, the company was sold to Time, Inc. who had also recently acquired SKI and Skiing magazines. Warren stayed involved with the film company until 2004, when he fully retired.

Warren and Laurie built a home on Orcas Island in the early 1990’s, splitting time between there and their home in Vail. In 1998, Warren and Laurie took a risk by investing in a private ski and golf club called the “Yellowstone Club”, located in Big Sky. Warren became the Director of Skiing (“whatever that is” he was heard to say), spending four months a year supporting the club through good and hard times. In recent years, the Yellowstone Club has proven to be a very successful venture. In 2010, the Ophir School in Big Sky converted one of its gymnasiums into a state of the art theater, calling it “The Warren Miller Performing Arts Center”, which made Miller very proud.

In 2016, Miller released his autobiography “Freedom Found: My Life Story”, looking back at the course of his life and sixty year film career. His films illustrated the growth of skiing during an extensive period, providing a virtual timeline of industry evolution and development. He also garnered a number of accolades during his career and was inducted into the Colorado Ski Hall of Fame in 1995.

Warren Miller was one of a kind, and, those of us lucky enough to have known him are a little better off than had we not. As Warren has said: “I’ll see you same time, same place next year, only I’ll be watching from a different mountaintop”.  You can learn more about him on his website: warrenmiller.org