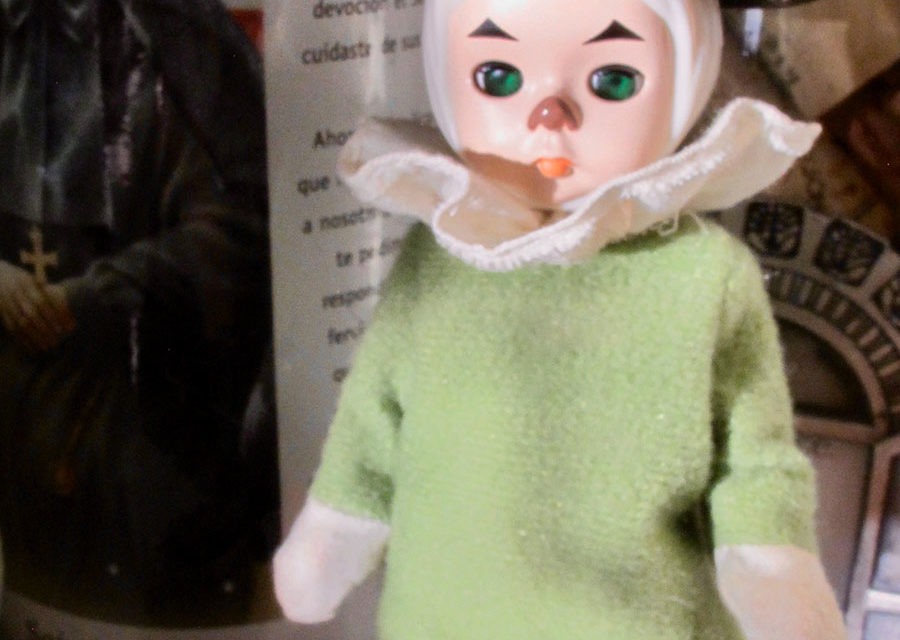 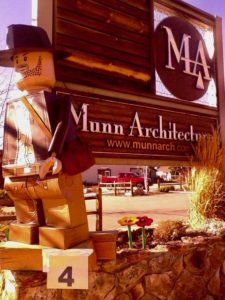 Munn Architecture’s LEGO Dr. “Indiana” Jones, Jr., professor of archaeology, is headed for nothing but “Fortune and glory.” The company’s scarecrow submission this year is complete with five o’clock shadow, gun belt, and Fedora. Photo by Cynthia McCoy

I don’t know what it was that drew me to this toy doll I found at a Granby yard sale Sunday, but it gave my friends the creeps.

As I passed the sale, I was compelled to turn around. I’m a sucker for a good deal, and when I saw the toy — which looked like a witch maybe, a clown or mime — I thought it would fit great with my Halloween decorations.

Was it the harlequin-like ruff collar and soft tunic, or the “open/close” eyes, green like mine? I noticed its head was turned around  (no tighty-righty, it’s just able to go all the way around) and I quickly fixed it. For a dollar, it was a delight doing business. I wondered what the child was like that once played with the toy.

With its rich history, Grand County is rife with stories of the wild and strange (whether fact or tall tale, or somewhere in between). After a while locals become familiar with the tangled web of storyline that wraps around these mountain valleys.

Some are passed down from the earliest generations in the area, others recorded, documented, and even re-enacted. Favorites from the Grand Lake area include the mystery and tragedy behind the Spider House, and the battles among commissioners (1883 for the county seat) and Native American peoples.

Growing up in Hot Sulphur Springs, I also had the opportunity to hang out with Paul Gilbert (storyteller, aerial photographer and cartographer, wildlife guru, and community grandpa-of-sorts). With a bike, if yours was broken; jars of animal parts for visits to local schools, and tons of photography equipment, Gilbert was my hero.

In 1977 he published a UFO photo he caught one winter a decade earlier near Parshall Divide (Sept. 2 Sky-Hi News). As a young reporter, I’ve also heard about sightings near Murphy Ranch, and ones near GCR 451 and James Peak.

I’m always intrigued with a good story, especially those regarding not-so-normal goings on. Are ghosts and aliens real? What happens in the afterlife?

It’s not hard to imagine other life in this endless galaxy, especially for me. The fact that my imagination runs wild is an understatement, and 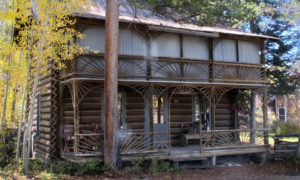 Some say at least one older boy escaped the “Spider House” on horseback, some say Watt’s two oldest — Ralph and Lloyd — were hunting with their dad when the family’s matriarch went on a fatal rampage. One ancestor has been a guest “spirit” at his family’s plot during the Grand Lake Area Arts Council’s Tombstone Tales, usually held each September. Photo by Cynthia McCoy

sometimes the chaos of over thinking things can be a curse. Thing is, we sometimes get carried away with our stories, or only remember fragments.

By the end of day last Sunday, my friends had me questioning the decision to keep the doll. I fell prey to nervous thought and began to agree the doll had an eerie look. The fact that its head had turned around again on the passenger seat while I was running an errand didn’t help matters.

Was I just being silly? I nervously giggled, and said “This sounds like the classic way to start a horror film: Girl finds innocent-looking doll at an October yard sale. Thinks it’s cute.”

And the reality made me laugh again. After some research upon my return home I found that the 5 ½” tall “scarecrow” doll was part of a Wizard of Oz series made by the Madame Alexander Doll Co. They go for about $10 on eBay right now (What a deal I got at the sale!) and the Lollipop Guild is adorable.

Along the same lines, it wasn’t anything arachnoid-ish that sunk its fangs into the Gregg family, who came across the plains to settle in a cabin with web-like detail woodwork on its porch (the “Spider House”). Although life certainly was scary in Grand County back in the day, the culprit was an illness now known as (post-partum) depression.

Along the arduous journey in an oxen-drawn covered wagon from Wisconsin in the 1880s, Mary Gregg and her husband “Watt” lost a baby (they lost three more to plague). Settled and left on her own while Watt and “Judge” Wescott hunted for winter supplies each season in Grand Lake, the hardship and loneliness were a last straw for Mary. A former resident of the area told me you can hear the cries of Mary, and that he prefers to not walk past the place in the evenings.

Mary is said to have gathered Josie, Ralph, Harold and Alex for a fairytale, turned a pistol on them, and then on herself. They were buried in one common grave in 1905. (other children include Clifford, Lloyd, Archie, Adlebert, John, and Warren — all born between 1885 and 1894 — children Ralph, Harold and Alex had incomplete histories in the family Bible).

Just a few yards away from the Spider House is Grand Lake, referred to as Spirit Lake. When the sun hits the waters in the morning just so, tendrils of mist rise from the surface.

Watt’s friend Judge (said to be the first white settler at Grand Lake) passed along a legend told to him by an old Ute chief: “Legend of Grand Lake” (published in the July 29, 1882 Grand Lake Prospector), which is one explanation of the phenomenon.

“White man, pause and gaze around, For we tread now on haunted ground! So said a chief to me one day, As along the shore we wound our way.” “Tell me,” Wescott pleaded, to hear about the “desperate fight”.

Sent out to the waters, Ute women and children encountered a storm, as a storm of another kind rained down on shore between the men and a band of Cheyenne and Arapaho. “(On logs and raft, tied near at hand, Our squaws and papooses had left the land. And were born away from this merciless shore, Never on earth to be seen any more.) … For at the first faint streak of day, These ghostly forms will fade away. … .”

Ghostly wisps and story details may fade away, but my curiosity and imagination won’t. One must tread carefully though, and grasp with much respect to tame wild tales.

Will the doll get up to shenanigans. Will it be the death of me? Only time will tell, or will it? To be continued?