The Wiedls — If you rock, they will roll 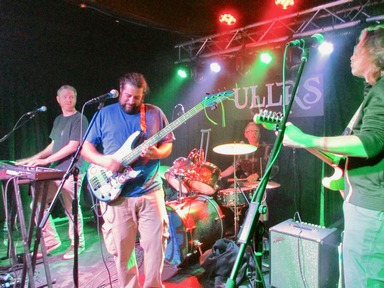 Photo:  BAND OF BROTHERS – The Wiedls love the sense of community here, and said everyone’s been “super supportive” of their musical career. They regularly play at Ullrs, return to their every-other-Thursday gig at The Peak again for a second summer (8-11 pm starting June 20), and Brian and Kenny are set to play duo performances at Vertical Bistro (2-5 pm June 14) and Brickhouse 40. Local band Hunker Down plays at The Peak on opposite Thursdays, starting June 27. (Photo by Cynthia McCoy, This Side of Berthoud)

Through a tight connection and tighter grooves, a band of brothers has been rocking the Fraser Valley music scene.

“The Wiedls get each other,” said Chelsea Day, local artist and fan. “They have unique personalities, and they function well together.”

During an energetic show at Ullrs Tavern in Winter Park this past spring, they encouraged their audience to shout out genres. In tribute to band Reel Big Fish, and “as an experiment,” members Mike Wiedl, identical twins Kevin and Brian Wiedl, and “brother-from-another-mother” Kenny Sciuto then proceeded to pull out a song they’d been working on, first in country, then rock, and finished it Ska-style. “It’s fun for everyone and keeps us on our toes as musicians,” Kevin said.

The “Wizard Song”, about a wizard battling evil, starts out as a Latin monk chant — words that translate into “If you rock, they will roll” (they explained later). It throws off the audience, which wonders what’s in store; their answer comes in the form of powerful guitar riffs that take over the tune.

The Wiedls rolled into Grand County one after another starting in 2013 with Kevin and Brian, and they have been rocking as a band since, (they rounded out C-Lot end-of-season concerts the last three ski seasons). Although seasonal add-in members come and go, the four maintain its core.

They studied communications (Kevin with a focus in radio and television production, Brian with a minor in music), and Kevin worked as a morning DJ during school. He and Brian (keyboard, lead vocals) also ran a local government TV station airing council meetings live. They applied to almost every ski resort in the state, and Winter Park Resort snagged them first. It’s been “the best detour I could have ever hoped for,” Kevin said.

The Wiedl brothers’ father gave them  “a great musical education,” Kevin said. “But the only instrument he plays is a mean tambourine.” (A fourth brother, Sean, is also musically talented, but “is a loser” because he’s still in Connecticut, Mike said). They all sang in school choirs, concerts, and musical theatre growing up as well.

Described as a “free spirit” by his brother Kevin, Mike (electric guitar), said he followed his brothers here from their hometown of Danbury, Conn. “for the pow-pow.” When he became a teenager, he received an electric guitar for his birthday and began lessons. His brothers followed suit, each picking a different instrument so they could form a band.

Kevin thought drums would be “the next-coolest thing” and now plays all kinds of percussion instruments, as well as piano, ukulele, and harmonica. He’s also having fun learning to play guitar, and a saxophone he got at a garage sale.

Kenny has been one of Kevin and Brian’s best friends since they were eight-year-old Cub Scouts, and is “an all-around handsome, cool guy.” Music’s been a big part of his life; his mom is a singer, and his uncle Vin game him his first bass. He’s been playing since he was 12: bass and electric guitar, trumpet, and he “fiddle(s) around” with several other instruments.

When it comes to repertoire, they play almost every genre — funk, pop, Ska, Reggae, all of the rocks (alternative, punk, … ). “What’s one we don’t touch?,” Mike asks, adding they even play country. “It started out as a joke, but then we kind of liked it.”

Brian and Kenny write most of their songs these days, mostly, admittingly, about Brian’s feelings. They are ongoing projects, as “none of ‘em are every really finished.” He said he likes to take away a little bit from everything he listens to, and comes up with a lot of lyrics in the shower. Inspirations include scenery, sunsets, pretty girls, and “reminiscing about good times.” When asked what prompts all this creativity, Brian said “girls, a butt load of coffee … and crazy adventures.”

“There’s nothing better than getting together with your buddies to have a few beers and sing some tunes,” Brian said, “except getting paid to do it!” The Wiedls hope they get people fired up when they play, “Go home with that nice, warm feeling in their chest, ya know?” Kevin added.