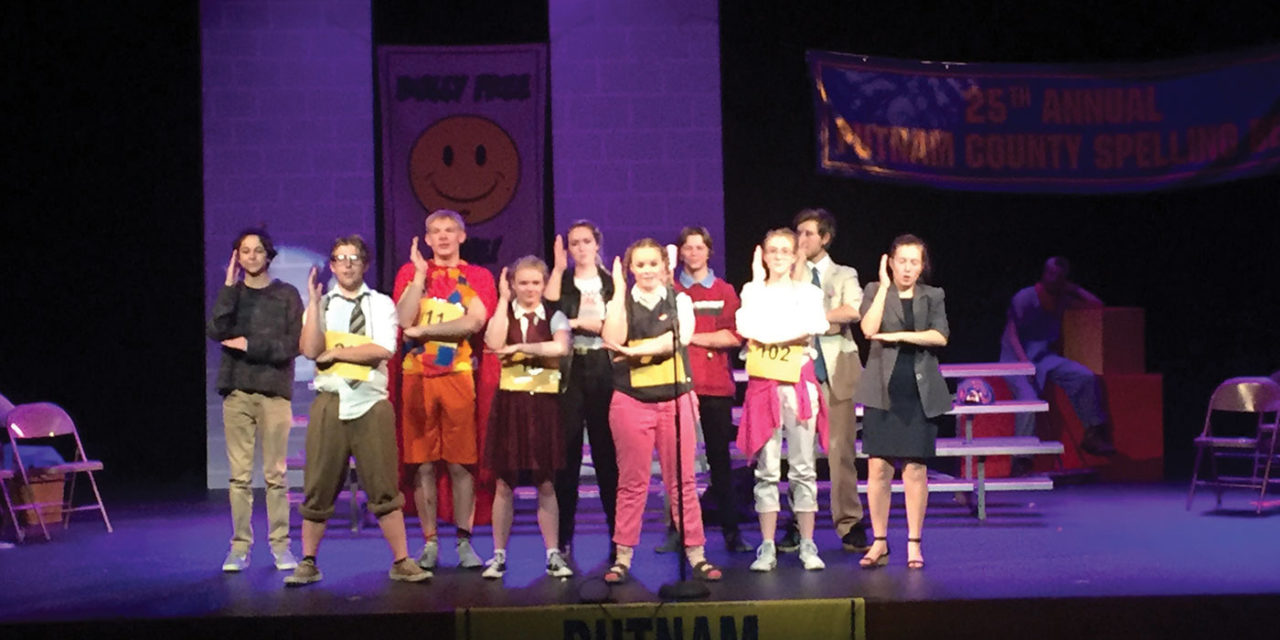 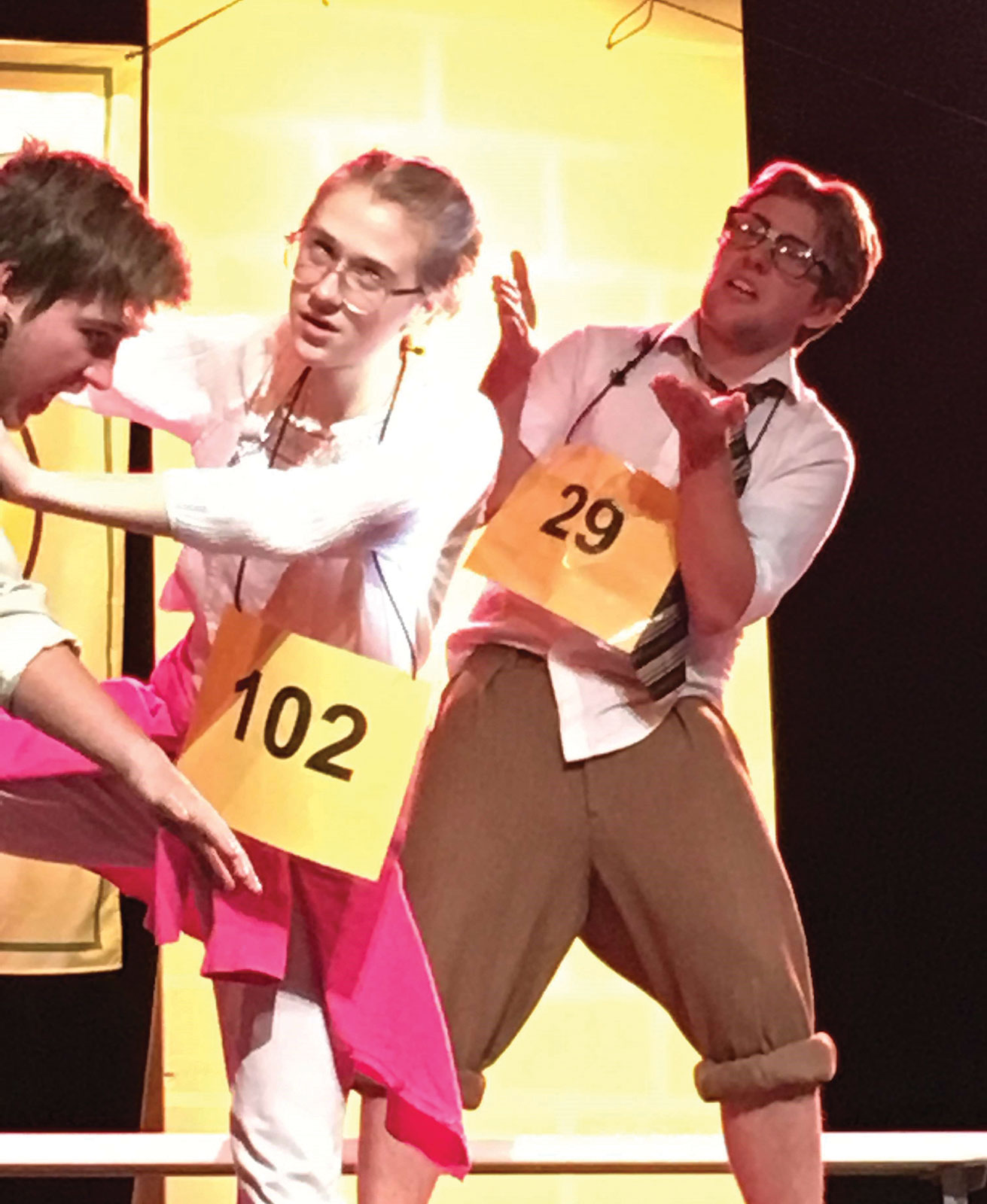 This years Middle Park High School Drama Club put on an excellent rendition of the timeless classic, The 25th Annual Putnam County Spelling Bee.  The play is a musical about nerdy middle schoolers in the midst of a spelling bee competition.

The cast had the audience in stitches throughout much of the performance. Assistant Principal, Steve Penrose said, “that was one of the best I have seen in years” adding  “the kids worked really hard to make it a good one.”

The students and crew started rehearsals right after Labor Day and held auditions the following week, so it was almost exactly two months of work to pull it all together in one weekend. The Middle Park High School Theater Director, Christal McDougall said, ”The show was better each night, of course. On Saturday, I actually think nothing went wrong. Amazing!”

Much of the props were made by McDougal and a handful of students.  The students who played the spellers’ family members brought in their own props to use while they “watched” the spelling bee. The wardrobe manager was Jesse Hoyhtya and according to McDougal, “She helped design the costumes, but she took charge of all organization and care of costumes. She also designed and created the cat t-shirt for Leaf Coneybear.”

Technical director for this show was Blake Mills (MPHS class of 2016) He worked with current students on all of the lighting and sound design. Some of his crew had done a bit of tech work last year, but he brought the team together and showed them all a few more tricks. McDougall said, “I’m lucky now to have a bunch of students who really know what they’re doing!” 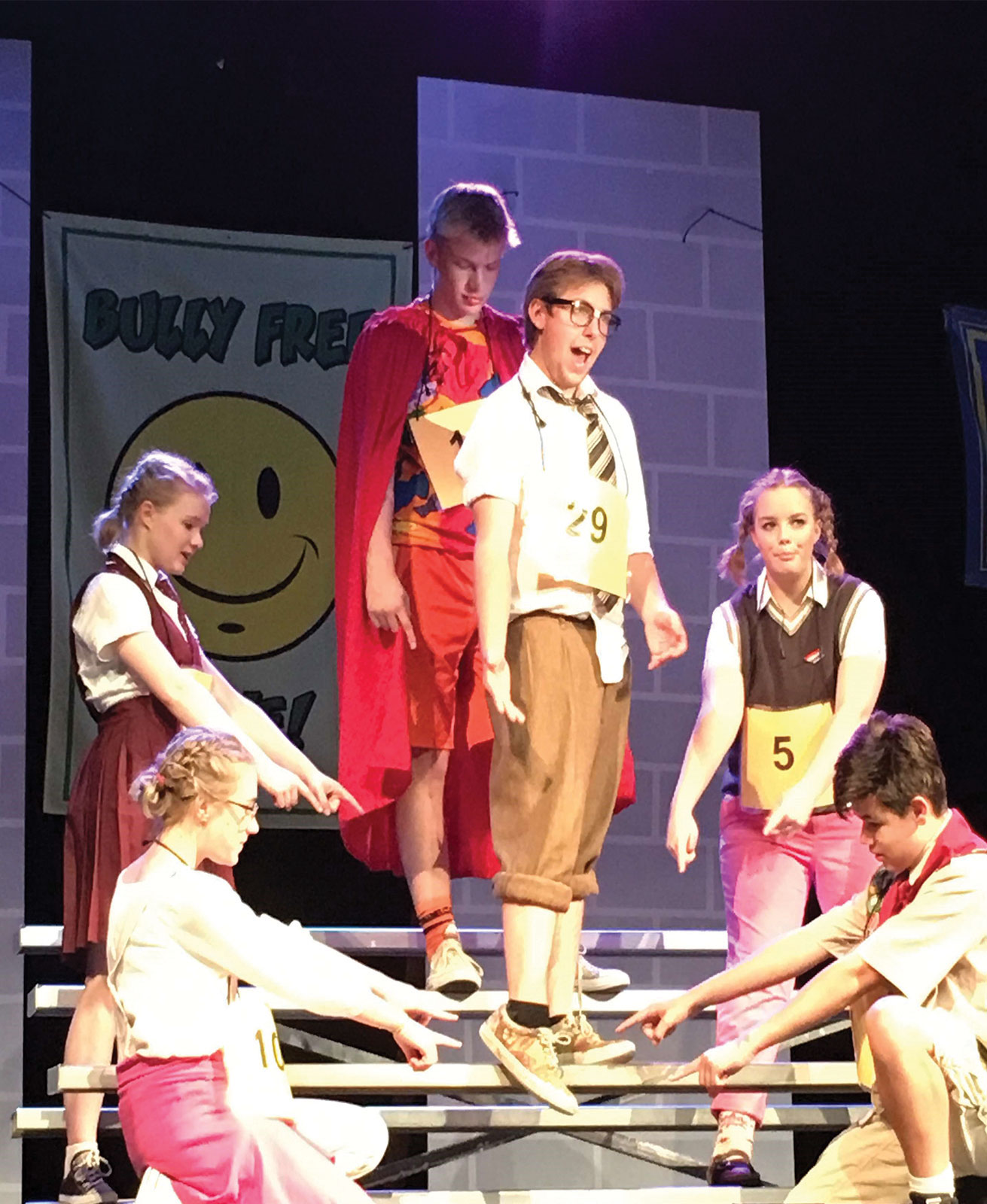 McDougall added, This is my first year at MPHS, and I don’t know how it’s been done in the past – but I chose this show for a bunch of reasons. First of all, I wanted a show that could be done with a small cast because I had no idea how many students would participate. (In the original Broadway production, the spellers double as family members for the “flashbacks” and other scenes).

This show is also fairly easy from a production standpoint, as there are no set or costume changes and no big, formal dance numbers. McDougall Said, “ It’s funny and sweet, and I knew the students would relate to the story.” The original is a little edgy and rated PG 13. I also knew a few of the students were great comedic actors, so I was sure they’d have fun with it.

McDougall expressed, “In my experience, most directors select the show without student input – we base our decisions on who me know we’ll have in the cast and resources we can draw upon such as musicians, choreographers, technical support and others.”

I have to give a shout-out to all of my seniors, who have been incredibly welcoming and supportive of the underclassmen -” I have been so impressed with their leadership.”  Sophomore Henry Kacik not only played Leaf Coneybear to perfection, he also was a huge part of the tech crew and a “right-hand man” for Blake. Freshman Cesar Arreguiin didn’t have a large role in the show, but he was so dedicated – always there, even on the few Fridays we rehearsed and painted scenery. My two stage managers, sophomore Ella Ailes and freshman Ruthie Everhart had the tough job of sometimes being “in charge” of their peers, but they were so committed and reliable – I could count on them for whatever I asked. One more behind the scenes person I have to thank. I’m grateful to Paige Daigle, an actor who has performed at Rocky Mountain Repertory Theatre for the past three years, for her work choreographing this show.

Theater Director Christal McDougall said, “I was so grateful to have my friend Mitch Samu work as music director for this show. He’s been in the business forever, working on Broadway, on national tours, and in regional theaters throughout his career – and is a smart, funny, and inspirational person.”  Samu made two trips up from the Front Range to work with the cast in person and then recorded tracks in keys and at tempos that worked for the students.

Finally McDougall wanted to add ”I can’t say enough about the support I have received from the faculty and staff at MPHS and the community in general. And I feel so lucky to get to do something I love with an amazing bunch of students. Everyone involved in the show was so supportive of each other through the whole process, and I’m grateful for their trust in me and for welcoming me into their world.”

From the opening number it was obvious how hard the director, students and support crew had worked to bring the show to the MPHS Park stage.   Opening night had its bumps and blunders but the cast handled and played on.  The show was entertaining, even bringing members of the audience up to participate in the spelling bee.

The Grand County TV18 crew filmed the opening night show and have DVDs available for $15 shipped via snail mail.  Check out the video trailer online at www.WinterParkTimes.com