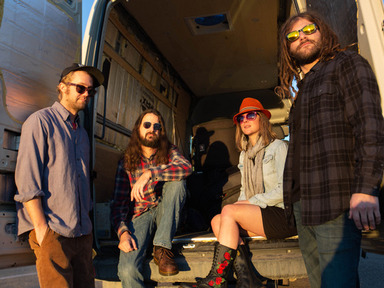 Everyone’s jaws just dropped. And, I’m pretty sure all the guys were, like me but for a different reason (probably), asking,  “Who IS this girl?”

The uncommon cover was one of two songs the singer / songwriter had practiced that night for her Grand County debut, because it would grab attention, and because it was funny.  She said we have to be able to laugh at ourselves, and that there’s “something powerful about being 100-percent genuinely yourself and moving forward with confidence in your own skin.”

She shares the idea in her lyrics in song “Real Deal Mama”. “Pour out 100 percent of your soul as yourself,” she said during her interview. “If you hold back, people will notice.” Not one to toot her own horn, Tara Rose only played the song for a few close friends. It wasn’t long before they prompted her to sing it in larger gatherings, where it “kind of became my signature tune! Ha ha.” It is the inspiration behind the name of one of her current ensembles: Tara Rose and The Real Deal.

The “string band gone wild” recently completed and is currently on a release tour of a five-song EP (which includes “Real Deal Mama”). They recorded with Cory Ballentine at Mountain Star Studio in Black Hawk — the band was able to stay together at the property while they worked, and Tara Rose worked with Airshow Mastering for the final touches (with double-Grammy-winner David Glasser).

A release party with full band is scheduled 10 pm Sunday, December 22 at Ullrs Tavern in Winter Park, and follows gigs in Montana and Wyoming. Tara Rose and Danjo are also playing duo performances during the Granby Ranch Vista Vibe winter series Dec. 19, 27, Jan. 2 and 19 (season kicks off with Matt Brown Dec. 14). And they are set to perform at Brickhouse 40 for its New Year’s Eve celebration.

Tara Rose wrote the other four songs on “Load the Van” as well. She said she “always kind of made up little jingles or sayings” and really began writing whole songs at a stretch of sea cliffs in Maui, Hawaii.  She had gotten a dog (Lucy), a guitar, and a surfboard “on a whim” and accepted a position on a job there using her Bachelor of Science degree in mechanical engineering from Oregon State University.

Not sure it was the right path, the cliffs gave her solace and  “the space to metaphorically shed the layers and discover myself without any preconceived notions of who I was supposed to be.” And it wasn’t a mechanical engineer.

The math path led her back to music and music theory. The early sax (middle school) and few guitar lessons she took in college built her a “good foundation”. After “thousands of practice hours” and “countless invaluable lessons and tips” from peers, Tara Rose has become a mostly self-taught, rising star in the Fraser Valley (and beyond) music scene. Her career came full circle this summer as a guest artist during a Thursday in the Park on the Rendezvous Event Center stage. Tara Rose sat in with band Hunker Down, sang “16 Tons”, and blew the audience away.

“It is also hard to say it has been a solo journey!,” Tara Rose is the first to admit. “I am inspired the most by my peers. The level of musical mastery that exists in the Colorado music scene is unreal and I feel so lucky to be a small part of it. Every time I get together with friends to play I am inspired by their dedication to their craft and willingness to share their knowledge.”

She currently dabbles in the mandolin, banjo, and electric guitar; is hoping to play around more with a looper pedal, and her mainstays are the acoustic guitar and kick-drum combo. Some of the best shows she’s ever attended “were great because of the kind of hard-to-put-your-finger-on-it ‘feeling’ that was created there,” Tara Rose says. “I strive to achieve that vibe! … It’s like family.”

Tara Rose had always wanted to be a ski bum and had never even been to Colorado; a decade later she’s here, and she’s rockin’ it. “Enjoy the ride,” she says. “Life is not a destination but a journey; It’s a process.”

“You can sit and pine away on the indecisions, paralyzed, or start moving forward and remain flexible,” she said. “You don’t always know where your decisions are going to lead.” For now, her decisions have inspired Tara Rose and The Real Deal to load up the van, and start off on an exciting new adventure. Songs on the new EP are available “any place you can stream” (Spotify, iTunes … ).