Staging A Dedication In Hideaway Park

The Mayor of Winter Park, Jimmy Lahrman, cut the ribbon at the dedication ceremony for the new Hideaway Park Stage before Big Head Todd and the Monsters graced the stage with it’s first concert. Photos by Stevie Lee Frazier & Emma Newitt

Ribbon Cutting for the new stage in Winter Park goes without a hitch- except Mother Nature decided to put on a little display of her own. Winds gusting up to 40mph and driving rain didn’t put a damper on the festivites in Hideaway Park Thursday June 22, 2017.

A cast of local businessman, political officials and their families graced the stage for the event for the official cutting of the ribbon. Jimmy Lahrman, Mayor of Winter Park said,”We are in a good position and are creating a cycle of investing back in to the community”. The stage is one component of a much larger picture. Lahrman added “this has been 20 years of hard work and vision and we are enjoying part of that here today.” 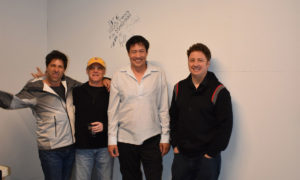 Todd Park Mohr of Big Head Todd and the Monsters puts his mark on the wall backstage. Photo by Emma Newitt

Big Head Todd and the Monsters took the stage at 6:40pm for a 90 minute show.  After the show Todd Park Mohr and the band put their mark on the wall backstage officially wrapping the first show of many according to Winter Park Chamber Director, Catherine Ross, “We have big plans for the new stage, we are hoping to great new things we have not done before”

The new stage is beautiful, Big Head Todd rocked it but, Mother Nature stole the show on this night with a rainbow of light over Winter Park’s Showcase venue.