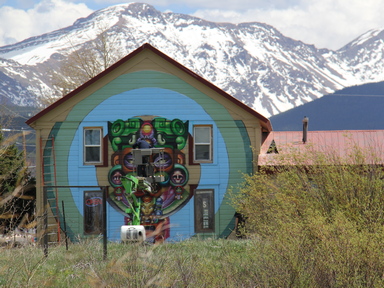 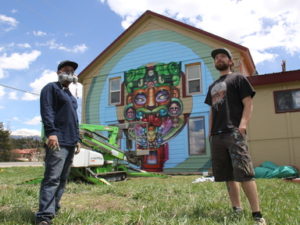 Fraser is providing a little more artful funk to the Valley.  Last week MPek, a world-renowned artist who uses a rattle can to bring his art to life, applied some funky vibes to the side of Azteca Mexican Restaurant in Fraser. MPek created an eye catching mural depicting Tlaloc an important deity of rain and fertility within the Aztec mythology.

‘Miky’ (MPek) is originally from Puebla, Mexico, commissioned to paint two murals on the historic building that once served as the Fraser Post Office. The large mural is a unique blend of art and heritage much like the Azteca logo, according to owner, Jonathan Gurrola, “We talked for a few minutes Monday night and he proposed the vision. By Tuesday morning he was painting.”  Gurrola added, “I am excited to see what people think.”

MPek was the original founder of a “secret society” of artists that emerged on the streets in and around Mexico City known as the MPek36 crew. Several of these artists are world renowned.

Graffiti is banned throughout Mexico City and, if caught, you get 36 hours in jail.  MPek said, “We have all done time for sharing our passion with the streets of Mexico City,   that is how we got our name” . 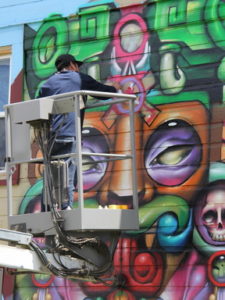 MPek explains his art as “energia sutil alta de evolucion de conciencia,” which translates to “subtle, high energy of evolution of consciousness”. He said, “I really like painting here, everyone is really friendly, and, I feel a connection with the earth, nature and mountains. I don’t get the same connection in urban areas”.

The murals at Azteca are the start of a summer of mural projects on tap. The Town’s Publics Arts Committee received 9 applications for this year’s Mural program, which, for the first time, included residential buildings in addition to commercial. The goal of the Fraser Mural Program is to use murals to turn ordinary spaces into community landmarks and to help instill a sense of community pride through the arts. Allie Heon, Business Development Specialist for the Town of Fraser said, “It’s exciting to see this program take off.  We have some interesting artists taking part in the program and we are looking forward to watching their projects come to life.”

All 9 applicants were awarded some level of support for their proposed projects from the Town’s $15,000 budget. While some applicants will do some or all of the work themselves, others may contribute financially or help out in other ways. As part of the program’s requirements, all projects must be completed by the end of this year’s “paintable” season. The colorful masterpieces will be popping up all over Fraser this summer, so be sure to watch as the projects unfold, adding to the Town’s “funky” flair.