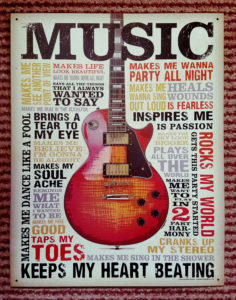 Saturday April 22nd marked the 10th anniversary of Record Store Day, an annual day to celebrate local independent record stores, and music in general. It’s also a day when die hard music fans flock to actual physical shops to scoop up exclusive and limited-edition releases that artists customize, often elaborately, for this special day. And while streaming is now the most popular way to access music, Record Store Day has added significant fuel to the resurgence of the vinyl LP, a format that is oddly defying an increasingly digital landscape.

The first Record Store Day in 2008 came at a time when digital sales were quickly expanding and physical retailers, particularly beleaguered independent retailers, were in decline. Yet while local shops accounted for just under 7% of physical music sales in the U.S., they contributed a much higher share of vinyl LP sales, an opportunity from which the seeds of an annual “Record Store Day” were sown.

With a relatively small number of participating retailers, the inaugural Record Store Day did drive a slight increase in album sales on a week-over-week basis. But the impact was wider than scattered sales boosts. Rather, sales of music by artists that thrived at independent record stores, such as Nick Cave & the Bad Seeds, Black Keys and M83, actually affected sales charts. 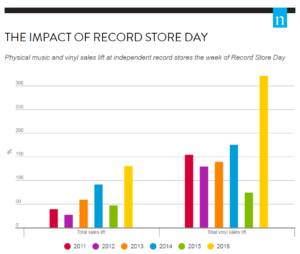 When the second year rolled around, the impact on sales was even more dramatic, with independent retailers seeing a 21% sales increase the week of Record Store Day, while the rest of the market saw a 20% decline during the same week. Vinyl sales at indie retailers that week jumped 114% and accounted for 75% of all U.S. vinyl sales. At this point it was clear: Record Store Day wasn’t just a positive and significant force for indie retail. By driving vinyl sales, it was a boon for the music industry as a whole. 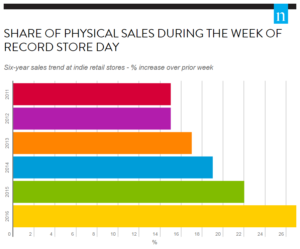 Last year, when streaming music hit an all-time high, Record Store Day enjoyed its biggest year yet, with a record-setting 383,000 vinyl LPs sold during that week, an increase of 321% on the prior week, fueled by releases from David Bowie, Bob Dylan, Johnny Cash and the Deftones. Not coincidentally, 2016 also marked the 11th straight year of growth in vinyl sales, despite the continued decline of physical music sales overall. In looking at the past five years alone, vinyl sales have climbed more than 320%, largely from an older, more affluent music fan base. Thanks in large part to Record Store Day’s spotlight, vinyl now accounts for more than 11% of total physical sales—well above the minuscule 0.2% just 10 years ago.

With a decade of big-name ambassadors like Ozzy Osbourne, Iggy Pop, Chuck D and Dave Grohl, as well as contributions from new acts, re-issued classics and exclusive packages from some of the biggest names in music, Record Store Day has become an unparalleled celebration of music and the independent music community. And in an industry that is undergoing constant change, it has made music the focus.