Whether you love history or just love a good love story the 6th annual Taste of History Champagne Brunch and Social is the place for you to be on Saturday August 26, 2017, from 10 am to 1 pm. One of the premier social and philanthropic events of the summer, this year the Grand County Historical Association (GCHA) is honored to partner with Wendy Christensen and Janet Engel to host the Taste of History at Casa de Engel which overlooks the Fraser Valley at 540 County Road 5, close to the Fraser Ballfields.

The theme for this year’s Taste of History was inspired by a visit to Casa de Engel when two horses posed for a photo by kissing. What better way to highlight the love stories behind two pivotal families in the Fraser Valley: William and Mary Cozens and George and Joyce Engel.

The Cozens Family
William Zane Cozens was born in Canada and moved with his family to New York State. As a young man he supported himself as a carpenter building barns and working his way west. He heard of the Pikes Peak gold strikes and moved to Central City.

William and Mary Cozens met in Central City in 1860 when Billy Cozens, a well known and extremely tall lawman, came to live and eat at the inn where the petite Irish orphan Mary York housed and fed miners. They were married that same year. In 1874, determined to start a new life and with three children in tow, William and Mary led their family over the Continental Divide to the mountain paradise along the Fraser River.

The story of the Cozens family and their ranch, stagecoach stop and post office is the subject of the Cozens Ranch Museum. The Cozens Museum is the only museum in the Fraser Valley. It presents not only the history of the area but also displays contemporary artworks by local artists and offers rich educational programs for youth and adults. The new GCHA book, Go Grand: Seven Tours through Grand County History has more about the Cozens Family as well as a chapter about the history of Winter Park. 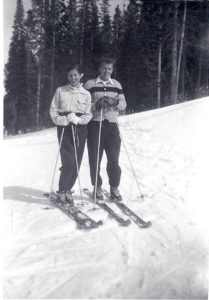 The Engel Family
In 1945, Winter Park Resort hired George Engel as their first paid ski patroller. In the following years George took on different responsibilities at the ski area, and eventually became one of the first ski instructors. In 1948 he bought and operated the Winter Park ski school and added the ski shop.

George met the love of his life, Joyce Hanna in 1951 as she disembarked from the Winter Park Ski Train. Joyce, with two BA degrees from the University of Colorado, was ready to ski and work. After dating for three weeks, George proposed to his future bride and business partner. The Winter Park Ski School under George’s leadership, and the Winter Park Ski Shop with Joyce at the helm, became fixtures of the ski area. George and Joyce’s two daughters grew up on the slopes.

Another Engel passion was horses, which led to their acquiring 40 acres along County Road 5 where they built Casa de Engel. The Engels helped to establish the Winter Park Horseman’s Association and the High Country Stampede Rodeo in Fraser.  Naturally, Janet Engel became a rodeo star. The Engels were also involved with the Middle Park Fair and Rodeo for decades. 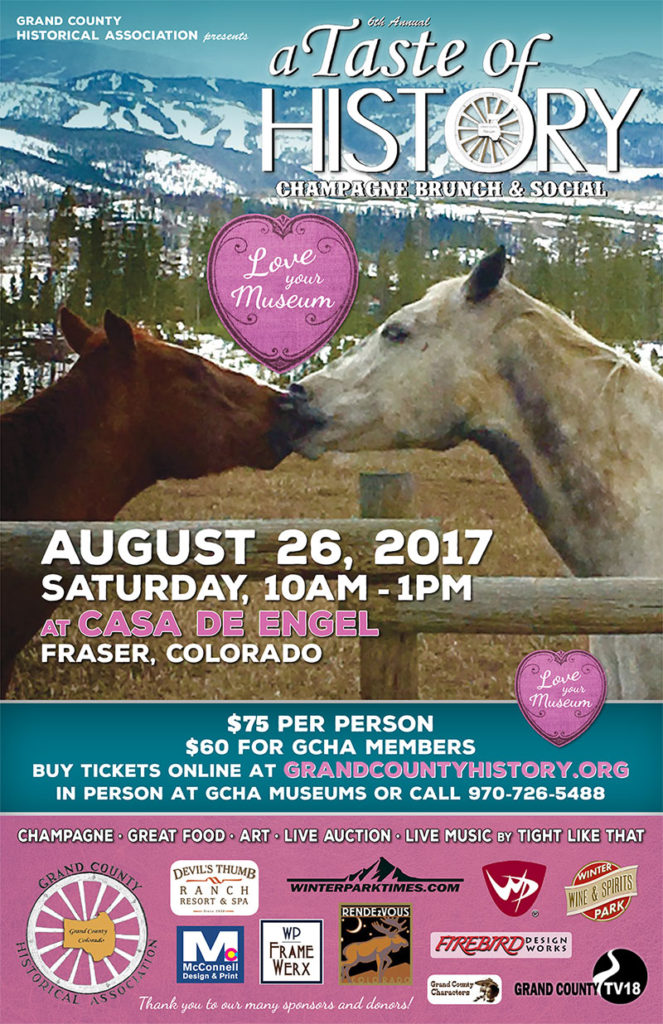 The Taste of History 2017 at Casa de Engel is an opportunity to feel not only the family love but to appreciate the impact of the Engel Family and the Cozens family on the Fraser Valley and beyond. The event includes a fabulous brunch, bottomless champagne mimosas, paintings, live music by Tight Like That, and opportunities to win wonderful items in a raffle and in auctions of unique items, art and adventures.

Tickets for the Taste of History are: $60 GCHA Members, $75 General Public, children 12 and under free.

Tables for individuals and corporations are available, check out prices and information at  www.grandcountyhistory.org or call 970-726-5488 for information.