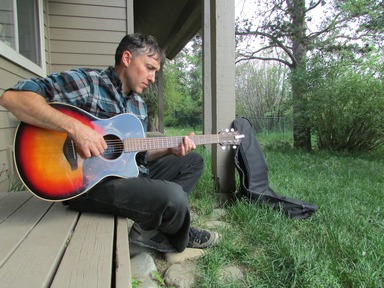 Photo: Musician Michael Yaussi is a full-time music instructor, with lessons for all levels. He performs with longtime protégé Ben Kotrba (a star already, at 16yo) in a band they call Purselane, and he can regularly be seen shredding on electric guitar with local band Funky Stuff (the band is tentative to play 6-8 pm Friday, Sept. 11 in the Cooper Creek Square courtyard in Winter Park).  Photo by Cynthia McCoy

Local guitar virtuoso Michael Yaussi’s name is rising in the local music scene, especially in new band Funky Stuff. He’s known the members (Patrick Brower (drums), Andy Irvine (bass), and Jonas Schultz (sax, keys)) for quite some time and says it’s a “dream band” for him to perform in. 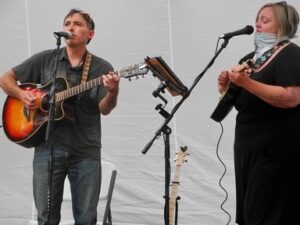 “Michael is a great player, because he has invested in learning in all the traditional ways, that makes communication efficient, but even more so because he let that not be a limitation in his individual style development,” Irvine says. “He’s fearless and thrives in the risk pool. I am always inspired by confident, bold and dedicated people; he is all of that big time.”

The timid, soft-spoken once-hidden gem likes to share his passion. He loves being a music instructor just as much as he does performing, and advises budding musicians to have fun, and not take “guff” from anyone.

He said his creative process is always evolving. “I want to help the world using love, authenticity, and hard work. That’s where I always come from.” It’s also the one place he comes back to. “I’m inspired by love, friends and family, creatures, craftsmanship, good vibes, bad vibes, ancient history, (and) pain … .”

His eyes light up. “How lucky am I to have learned from some of my greatest heroes, using recordings and videos?” The modest musician is fascinated by the lessons available through modern technology. “Learning by ear is imperative,” he said. “It allows insight from any of the greatest players in history.” (Among them he lists Jimi Hendrix, Danny Gatton, Pass, Jimmy Bruno, Alan Munde, Victor Wooten, Josco Stephan, Pat Metheny).

Yaussi said his closest friends “are some of the best songwriters I’ve ever heard. … They have taught me so much. They have no desire to be famous but to me they (already) are.”

His own song list is exponential. As a songwriter he said he’s “invested in the technical and professional aspects,” … “sometimes favoring more of a compositional approach … .” Many times, he said, his songs write themselves, and he watches as a “bystander”.

Yaussi’s dad John had a beautiful voice, and went to school for opera singing. His sister does as well, his mom was always known to have a spectacular rendition of “Hello, Dolly!”, and paternal Aunt Jeri’s blues voice was known throughout the family to be something extra special.

It is no surprise Michael showed phenomenal creativity early on. He said, “If it hadn’t been music, it would’ve been something else (artistic).” He picked up his first acoustic guitar at age 15, and has since added electric guitar (a Fender Stratocaster he calls “Catalina”), go-to six-string Yamaha “Nina”, bass, drums, and most recently banjo to his musical accouterment.

He received a degree in music performance from the University of Colorado, Denver; had performed as a musician (including in a theatre pit orchestra) and instructor in the Front Range for 15 years. Then, in 2007, an “old spirit … beckoned” him back to Grand County, and he’s been re-rooted in Winter Park for 15 years (with 16yo canine companion Lucy). This past year, the intense athletic musician has been reaching new heights working with Eagle Wind Sound destination recording studio in Winter Park.