This past week saw the opening of the 101st Middle Park Fair and Rodeo (MPFR) at the County Fairgrounds in Kremmling, including horse shows; livestock weigh-ins; an exhibit hall filled with arts, crafts, pies, etc.; a royalty competition; junior rodeo; barrel racing and more.

The MPFR is a Grand County tradition that reaches back to the very beginning of the 20th century. At that time, horse racing, sharp shooting, and other forms of cowboy entertainment were prevalent in the newly-settled American West, and Grand County was no different. Corrals and race tracks were built around the county. And informal green-horse races and bucking contests were held in the streets of Kremmling, the center of regional commerce in the early 1900s.

But following an unfortunate accident on Independence Day, 1911, in which Grand County resident Emory Sevier was thrown from a horse against a brick wall, an effort was begun to make the events safer and more organized. Upon urging from his wife, Sevier’s brother-in-law, Kremmling rancher Henry McElroy, donated some of his own lands just east of town, constructed the first set of simple bleachers, and enlisted friends and county leaders to found the Grand County Fair Association by May 1912.

“From the beginning,” wrote County Historian Robert Black in Island of the Rockies, “the fair was more than just a country rodeo. A printed program was issued and exhibits, chiefly of the work of school children, were arranged. But the principal attraction was still the bucking horse contest.”

The spectacle would continue to grow. The following year, permanent stables and a large corral were constructed for race horses and bucking stock and the railroad offered reduced excursion fares. Famous Denver sharpshooter Captain A.H. Hardy performed daily and “moving pictures” were shown in the evenings. Sewing crafts and leather working were exhibited and a prize was offered for the best original poem.

The new fair contributed to regional economic stimulation and improved infrastructure, including telephone lines and roads for motor vehicle travel. By 1915, parking had become a problem and barbed wire fencing was built up to prevent those who would sneak in without purchasing a ticket. With the exception of a few years during each World War, the fair and rodeo has continued, becoming an institution of Grand County’s Western heritage.

In this year’s invitation to the event, Robert Nelson, MPFR Board President, stated, “As we start a new century of western traditions, I would like to welcome everyone to this year’s events, which include the Colorado Pro Rodeo Association, Ranch Rodeo, Junior Rodeo, along with 4-H Shows and the Livestock Sale.” 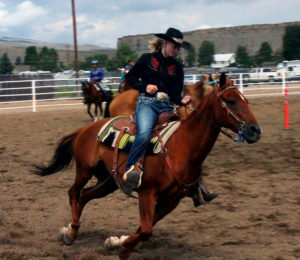 By Marissa Lorenz – Madison VanBemmelen, senior at Middle Park High School, warms up her 11-year old Quarter horse, Finn, prior to the Western Equitation competition. Madison took part in all of the Western horsemanship events this week.

“The dedication and history of our sponsors and volunteers to this annual event clearly shows the pride each and every one of them has in our western heritage and the family atmosphere it provides. You will see this from the exhibits in the Extension Hall, the 4-H livestock, and small animal exhibits of our local youth and families, to the rodeos and displays of horsemanship and other events that show the hard work of our youth and the talents of families in the Middle Park area we all call home.”

Activities will continue with a packed schedule this weekend. Tonight is the pre-sale dinner and the Junior Livestock Auction. Come pick your own turkey, goat, chicken, steer, pig or chicken! Processing services are offered to prepare purchases for the freezer. However, butchering is not required and buyers may bring their furry/feathery purchases home.

Saturday is Family Day, starting off with free kids games, including bouncy houses, bungee trampoline, tumble bumble balls, and an old-time photo booth. Fair attendees can see an archery competition, horse races, mini bronco or wild pony races and ranch rodeo events. A special luncheon will recognize this year’s Pioneers of the Year and Citizens of the Year. This year, Jim and Bob Chase, who grew up on a ranch homesteaded by their grandfather in 1899, and Lorene Linke, who raised her children on the ranch homesteaded by their great-grandfather in 1883, will be honored as Pioneers of the Year. The 2016 Middle Park Fair & Rodeo Centennial Committee will be honored as Citizens of the Year.

Sunday will offer a cowboy church service, antique tractor race, barbeque, and will feature the Colorado Professional Rodeo Association. Food and craft vendors will be present throughout the weekend and the Exhibit Hall is open for viewing. Admission each day costs $10 for adults and $5 for children. More information can be had online at MiddleParkFairandRodeo.com.