The 35th Winter Park Jazz Festival, July 15-16, 2017, will feature two days of world class artists along with some up and coming favorites. 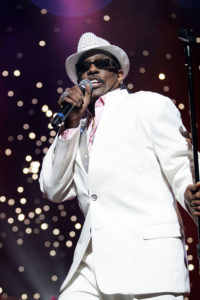 From “Party Train” to “There Goes My Baby” and the quintessential “Charlie, Last Name Wilson”, everyone at Hideaway Park will have at least one track to sing along to word for word, a reality that translates into the relevance of Mr. Wilson, a living legend.

Quite frankly, Charlie Wilson knows how to put on a show. Flashy costume changes, bustling backup dancers, an animated horn section, and his ability to make every man in the audience want to serenade their woman.  If you aren’t yet a fan of the ageless R&B crooner, you will be after Saturday on the new stage in Winter Park.

Dotsero Long-Standing “Colorado Favorite”
Taking their name from a small mountain town in the Rocky Mountains of  Colorado,  DOTSERO  means  “Something  Unique”  according  to Ute Native American legend to some. It means  DOT-ZERO on the earliest geographical railroad maps to others, but to  jazz  fans worldwide,   DOTSERO  means  Contemporary  Jazz  at its best, full of life, energy and spontaneity that few artists in the genre have been able to match. A no-nonsense sax and guitar driven thrill ride of energy and excitement. As much fun to watch as they are to listen to. The band has been a favorite at the Winter Park Jazz fests over the years. 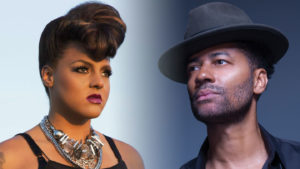 Marsha Ambrosius will unleash her next tale of love and life on stage Sunday July 16th at the 35th annual Winter Park Jazz Festival presented by Volarios in Winter Park.  Teaming up with Grammy Award nominee Eric Benet, once a barefoot dreadlocked troubadour to now, a suave standard-bearer for contemporary R&B. Marsha Ambrosius & Eric Benét bring a blend of styles that will be unique and soulful to say the least.  Benét may have changed his look, but one thing has remained consistent: his dedication to crafting authentic music that engages the soul. “I’m not chasing any current whatevers,” says Benét, a four-time Grammy Award nominee. “It’s about music that gives me goose bumps and touches my soul.”

When discussing the collaboration, Marsha joyfully offers, “I’ve been privileged to be under great wings that have allowed me to shine.” A native of Liverpool, England, Marsha burst on the music scene as the singing half of Floetry. Their 2002 debut Floetic produced “Say Yes” and “Getting Late” as well as four Grammy® nods. Marsha has also worked with the likes of Alicia Keys, Kanye West, Jamie Foxx, Busta Rhymes and Nas. She’s been nominated for a total of six Grammys®, honored by BMI as their “Songwriter of the Year” and has a devoted fan base that includes her musical idols Prince and Stevie Wonder.