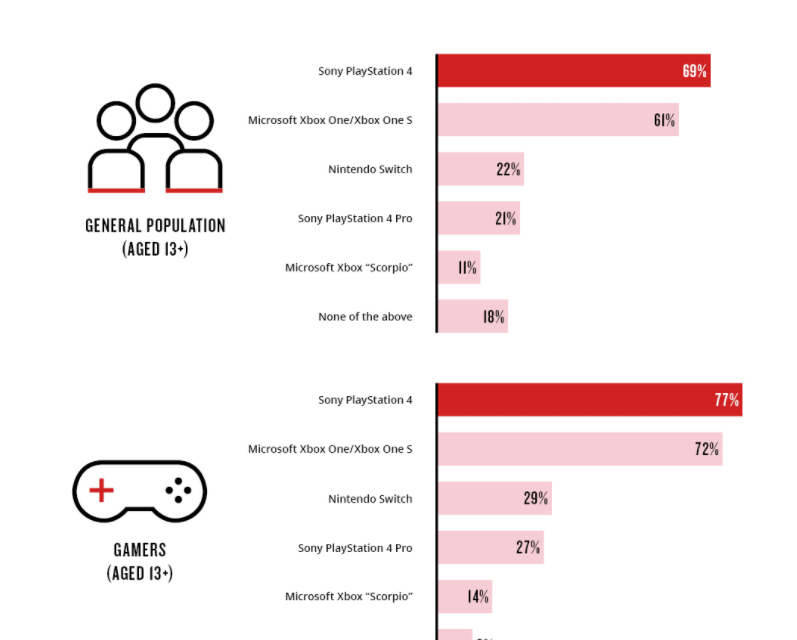 From a content perspective, the storylines from the U.S. video game industry were nothing short of compelling last year, with subjects ranging from the first-person shooter excitement of Overwatch to the location-based augmented reality phenomenon Pokémon Go.

But it wasn’t just content that dominated the headlines; gaming consoles were in the news too, with mid-cycle updates, a new strategy from manufacturers that could bring the cadence of new device releases more in line with other technology releases such as smartphones and tablets.

Traditionally, a new generation of consoles is released every five-six years, with huge fanfare and high-profile compatible game releases. Last year’s release of Sony’s PlayStation 4 Pro and the announcement of Microsoft’s forthcoming Xbox project, “Scorpio,” marked a new trend in the gaming industry—the mid-cycle update. While more powerful and more expensive than their base counterparts (the PlayStation 4 and Xbox One/One S), these updated consoles use the same operating system as their base counterparts, which avoids splitting the player base for each console and allows consumers to carry their existing library of games over to the upgraded device. 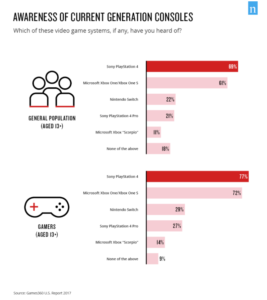 The strategy is a way for manufacturers to unlock more value from gamers, and new research from the 2017 Nielsen Games 360 Report shows that gamers’ awareness for these new consoles is promising.

Intent to buy, is also encouraging. Twenty-one percent of gamers said they would “definitely” or “probably” buy a PlayStation 4 Pro, and 13% said they would likely be buying Project Scorpio when it is released in late 2017. As more information on Scorpio is released, and as we get closer to the holidays, Sony and Microsoft should both see increased awareness in their new systems, which in turn will boost interest. The report also revealed that brand loyalty runs deep with gamers, especially when players can keep their games when they buy a new console update. 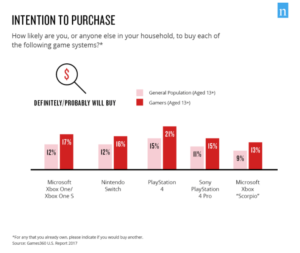 While not a mid-cycle upgrade, Nintendo’s Switch console has also been in the news. Released in March, the device is playable as a console or as a mobile device and has seen strong initial sales. The 2017 Nielsen Games 360 Report was conducted prior to its release, but awareness for the new console at that time was nevertheless higher than the already-in-market PlayStation 4 Pro.