Blues from the Top: The Record Company plays Saturday! 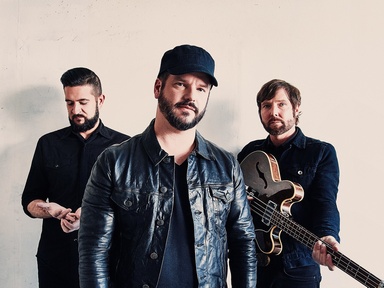 On Monday, June 10th, Grand County Blue Society made the announcement that ‘The Record Company’ would be performing at the 17th annual Blues for the Top Festival.

Fresh from a performance at Red Rocks, where they opened for Dispatch on June 9th, the Grammy-nominated trio that cut their first album in their living room are bringing their gritty slide guitar, fuzzed out bass and driving drums to the stage Saturday afternoon, June 29th.

Their first album, Give It Back To You, was released in 2016, spawning three Top Ten hits at Triple-A radio (including the #1 smash “Off The Ground”), earned the band a slew of festival appearances and sold-out headline dates around the world, and garnered a GRAMMY nomination.

The group made the rounds on late night TV, shared bills with John Mayer, Zac Brown Band, My Morning Jacket and Nathaniel Rateliff among others, and racked up more than ten million streams on Spotify. The critical response was just as ecstatic, with Rolling Stone raving that the band “kicks up a raw, rootsy racket” and Entertainment Weekly called the album a “soul scorcher.”

Far from altering The Record Company’s DNA, success only served to enhance it, strengthening the band’s bonds and elevating the intangible chemistry that ignited their breakout. At its core, the group is a pure democracy: all the work, all the rewards, all the happiness and heartache and joy and pain are split evenly. Each member brings their own unique strengths to the table, and the three fit together seamlessly, filling in each other’s gaps like pieces of a puzzle.

“We’re a true band in that we all elevate each other,” explains Chris Vos, singer/guitarist. “Our individual strengths cover each other’s individual weaknesses, so there’s no way to replace any one of us. We’d all played in bands before, but none of us found what we were looking for until we got together.”

Even at their first jam session, it was clear that the trio was on to something special. With a sound that blended the biting blues of John Lee Hooker with the charismatic swagger of the Rolling Stones, the band went from releasing their home-recorded debut to taking the stage at Madison Square Garden in the span of just 18 months. As the group’s audience grew, so did their artistry, and when it came time to record their new album, All Of This Life, it was clear that their approach in the studio would have to take a big step up to reflect the maturation they’d undergone on the road.

“What we did making that first record by ourselves in my living room, we wore that like a badge of pride,” says bassist Alex Stiff. “But we evolved so much as a band after that and our songwriting grew so much that we knew we had to take it out of the living room this time around.”

While the group still worked up the core of most songs at home and produced themselves like the old days, they headed to nearby Boulevard Recording in Hollywood on a quest to break new sonic ground. The eclectic array of analog gear in the studio, which had previously hosted everyone from Pink Floyd to Fleetwood Mac to The War on Drugs, enabled the band to push the limits of their productions and arrangements while still capturing all the scintillating power and spontaneity of their live show.

“We want to be known as the best live band on Earth,” says drummer Marc Cazorla, “and the only way to do that is to believe it. We were an opening band for five years, and we made it our goal every night when we took the stage to be remembered.”

To learn more about them, visit: therecordcompany.net.