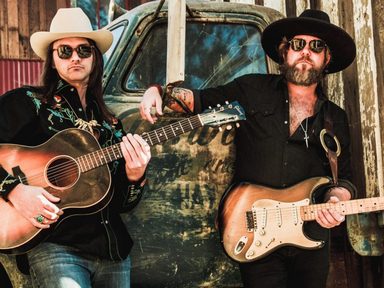 Duane Betts and Devon Allman didn’t know how well they’d work as songwriting collaborators until they started writing a tune together.

Betts was touring with Allman as a guest performer with The Devon Allman Project when they decided to write their first collaborative song in the back of a bus headed to another gig.

When Allman messed with one of Betts’ chord changes and Betts liked the change, both knew right then they had a special musical chemistry.

“If someone can mess with a chord change and you like it, you know you’ve got something,” Betts said.

Of course, the two musicians have also known each other most of their lives. Allman is the son of the late Gregg Allman, a founding member of the legendary Allman Brothers Band. Betts is the son of Dickey Betts, a founding
guitarist with the band.

They first met as teenagers when the Allman Brothers were on tour promoting a 20th anniversary retrospective box set, “Dreams.” They later became accomplished musicians in their own right, jamming on occasion and eventually touring together in the aforementioned Devon Allman Project.

Knowing they had an original musical chemistry that went beyond just being their father’s sons, Allman and Betts decided to combine their names to create a brand new band, The Allman Betts Band. The band is now on its first world tour and will release their first album on June 28.

“We’ve talked about doing this for a long time,” Betts said. “Although we’re different personalities, we mesh together. We know we have a chemistry onstage, and now we know we can write great songs together.”