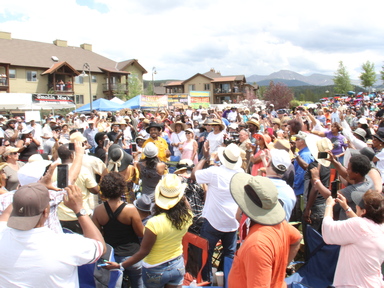 The new stage at Hideaway Park proved to be a sweet spot last weekend for Jazz and R&B Lovers that came out to the 36th Annual Winter Park Jazz Festival.

Saturday’s show featured Fantasia, the winner of American Idol competition, but many felt like Sheila E took the show with soulful rythyms, dance routines and percussion-filled backbeats.  For three decades, Sheila E has been a dynamic and influential musician—moving and entertaining others as a percussionist, singer, songwriter, and more. Since debuting with her first solo album, The Glamorous Life, Sheila E has continued to evolve as a musical icon and inspirational figure. 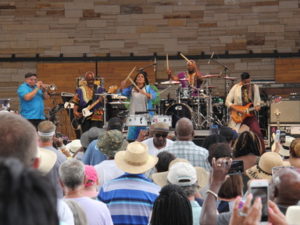 Sheila E has been playing conga drums since the age of three. Her father, Pete Escovedo, worked with Santana and led the Latin-jazz fusion band Azteca. Her guitarist carried an air of Prince-like qualities in appearance, riffs and deamenaor. Not a surprise as she was a Fiance of the Icon Pop Star, although they never married.

Sunday’s show was another eclectic blend of jazz, pop and R&B artists.

Catherine Ross, Winter Park Chamber of Commerce director said, “We thought the lineup was right on the mark again this year”. The summer concert season is packed with festivals and finding the right talent and the right time is always an excit 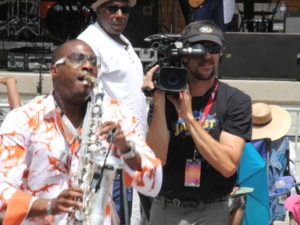 ing and  challenging collaboration of agents and promoters.

Sunday, Dotsero, a Colorado based Jazz group that started in the late 1980’s kicked off a day of beautiful weather, food and music. A crowd favorite was Boney James. His saxaphone rang out traditional jazz melodies and originals that have put him on the top of the jazz charts for years.

New to the stage was Damien Escobar, also known as Dame Esco, is an American violinist. He was previously in the duo Nuttin’ But Stringz with his brother Tourie, but has been a solo artist since 2012. His “crossover violin” musical style consists of a mix of classical, jazz, pop, R&B, and hip hop and brought an emotional performance to the crowd, literally. 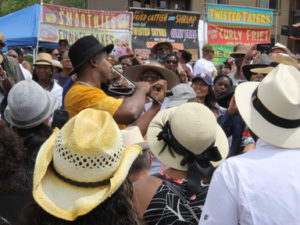 Keith Sweat was the headliner of the weekend for many concert goers.  Born in Harlem, New York, not far from the world-famous Apollo Theater. He has an extensive background in the R&B scene dating back to the mid seventies. Keith put on a great show and invited guests from the crowd to be a part of the show.  Sweat said, “I put it out there”, I write and sing about my life. “My music is about situations I’ve gone through being in a relationship. You won’t hear me write a song about walking on a beach, because that isn’t what my life has been about. I write songs about what I know and what I know is the ups and downs of relationships. What I know about is what it feels like to hurt and be hurt. What I know about is love.”