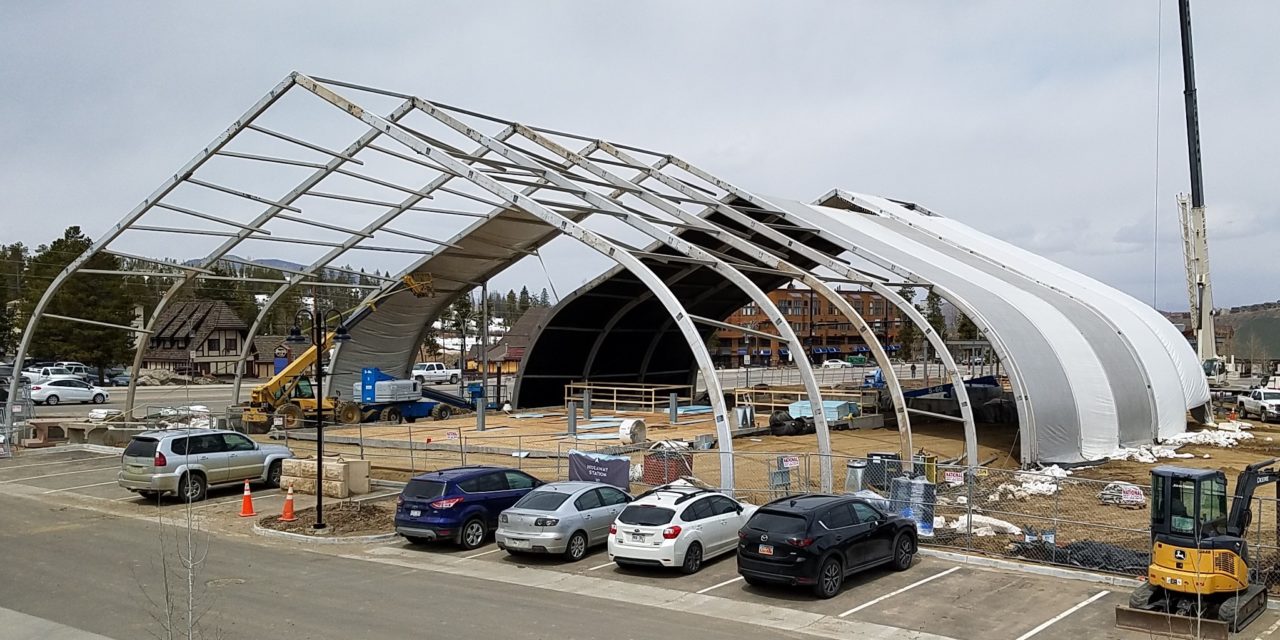 Photo:  Tennis Dome coming down! After providing protection from the elements over the winter, the large tent-like structure is being removed from the Sitzmark South construction site on Highway 40 in downtown Winter Park.  Photo by Casey Malon

Ed Raegner, owner of the Sitzmark South Lot A, where Strip and Tail and The Basement are located, asked the Winter Park Town Council to schedule a workshop to discuss the road and sidewalk that is going in on Baker Drive, just behind his building. The plans show a connected sidewalk running from Hwy 40 to King’s Crossing Road, turning south on Baker Drive and running on the west side of the new street. The proposed plans would eliminate 14 parking spaces and Raegner would like to discuss options of placing the sidewalk on the east side of the street with the Town and the developer. The Town agreed to schedule a workshop, with any changes requiring approval placed on the agenda of a subsequent town council meeting.

Fraser Valley Metropolitan Rec District Board Election set for May 8

Director of Parks, Recreation & Golf, Scott Ledin provided an update on the Fraser Valley Metropolitan Recreation District. He told the Winter Park Town Council that their Board elections are taking place at the Grand Park Rec Center on May 8th. There are five candidates running for three vacant seats. Board President, John Glancey is term limited and leaves after serving on the board for eight years, Kimberly Hanna is moving out of the district, and David McKnight is seeking re-election. Other candidates are Al White, David Corbin, Lisa Steckler and Kelley Glancey. The election is open to all that own property within the district, so the District opted to designate a polling place, with Ann McConnell serving as the Designated Election Official. Paper ballots can also be picked up by May 1st at the Grand Park Rec Center.

The Ice Rink refrigeration project is moving along. There is still a $30-50,000 funding shortfall, but they plan to get started as soon as the weather allows. Discussions with Mountain Parks Electric and the County have resulted in cost reduction opportunities. Channel 9 also did a story on the project last week and it is hoped that will further generate support.

In other Rec District news, Pole Creek Golf Club is hoping to open mid-May, but Mother Nature is in charge. Bistro 28 will reopen for Mother’s Day brunch, but a firm reopening date has not been set. The summer activity guide should be available by early May, but specialty camp information is available online now. For more information, visit fraservalleyrec.org

Executive Director, Catherine Ross, told the Winter Park Town Council they’re very busy right now. They have been working with Winter Park Resort on the Spring Splash + Bash events and are hoping for a good turnout for this weekend’s events.

Ross told the Council she is hoping to finalize the summer concert schedule soon. The Switchback Music Festival has been set for the weekend of June 16-17, and tickets are now on sale. Early buyers will benefit from lower ticket prices. Ross also stated that Jazz Fest ticket sales are 17% ahead of last year’s sales. They have just added Country music artist, Justin Moore, as the headliner for the August 25th Country in the Park festival. They are working to secure a headliner for the August 11th Solshine Festival which should be announced soon.

Ride the Rockies will be here on June 14th. Headquartered at Grand Park, they will have events at Hideaway Park starting at 2 pm. She told the Council that, while there will be music at the Park that Thursday, it won’t be the standard Thursday night music in the park. Ride the Rockies has a beer sponsor that will be selling beer at the venue, so attendees will not be allowed to bring their own alcohol into the park that night.

Housing Manager John Crone traveled to Boulder to receive the 2018 Governor’s Award for Downtown Excellence: Best New Addition to Downtown, from Downtown Colorado, Inc. last Friday. The award presented was improperly engraved to “Hikeaway” Station, so a corrected award will be sent to the Town upon completion.

In other housing updates, Crone and Interim Town Manager, Stan Zemler, will be meeting with Winter Park Resort to finalize financing and the lease for the Dimmit II affordable housing development. They will also be meeting with Fraser Town Manager, Jeff Durbin, to discuss coordination of housing solutions next week.

As spring settles in, finishing touches will be completed at the Hideaway Place complex. Big Valley Construction will build an enclosure for the dumpsters, and, they’ll plan the first resident forum to get together to discuss what’s working and any areas of concern. The Housing Authority is also reviewing responses to an RFP for Property Management services. The complex does not have an onsite Resident Manager, and this is a more efficient way to manage it. Crone also told the Council that they have ended the “light wars” by replacing all of the remotes for the ceiling fans, which had interfered with neighbors in adjacent units. He confirmed that they will not be using them in future developments.

Transit Manager Michael Koch told the Winter Park Town Council that the Spring schedule will begin on Monday, April 23. The service runs primarily along Highway 40 between Winter Park and Fraser, with flex service calls to deviate accepted. The Summer route will include southbound travel and stop(s) on Old Victory Road in Fraser, exiting Grand Park at the stoplight onto Highway 40.

Koch reported that March ridership was up 20% over last years and he has begun work on the 2018-2019 service work, reviewing the need for any changes to service. He described the Green Line as being “tapped out”. A ridership survey on the Granby line was conducted in March and Koch is meeting with the Town of Granby to discuss adding year-round service to Granby.

Koch is also meeting with the team at Gillig to discuss the next order of 2 35’ buses, which are anticipated to be completed and ready for use by late January 2019. He said a thrid cutaway (short) bus will also be added to the fleet in late summer.