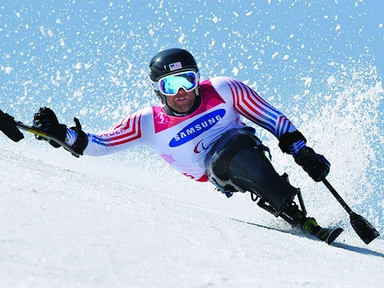 The National Sports Center for the Disabled (NSCD) and Winter Park Resort are hosting the US Disabled National Championships next week, March 26th-30th.

Erik Petersen, Competition Director said, “This will be a great event, some of the best athletes are coming in to compete.”  Petersen expects 60-70 athletes from at least 9 different countries to participate in the event. Athletes from the US and Canadian Paralympic Teams will be here for one of the final events of the racing season.

The race will feature (SG) Super Giant Slalom, (GS) Giant Slalom and (S) Slalom events over the course of 5 days.  Petersen said, “All the races are finishing on Lower Hughes right at the base of the mountain. It is a great venue for spectators and press.”

The event is sanctioned through US Ski and Snowboarding Association and the World Para Alpine Skiing organization formerly the International Paralympic committee (IPC).

Petersen said, “We have a few team members that can definitely make the podium”, calling out Masa Tokai and Yoshi Tonaka, “Both of these athletes are able to lay down some solid runs.” whil adding, “The reigning world downhill Champion, Andrew Kurka from the US Ski Team will be here as well as the SG Champion, Kurt Oatway of the Canadian National Ski Team.”

The NSCD Competitive program has spawned some of the world’s most elite para athletes over the last few decades. The program started back in the 70’s and has become one of the leading adaptive sports programs in the world.

Looking back on the competitive nature of the human spirit it all started at the end of the Second World War, as injured ex-servicemen wanted to return to the sport they loved. In 1948, the first adaptive programs and courses were offered.

The first documented Championships for skiers with an impairment were held in Badgastein, Austria, in 1948 with 17 athletes taking part. Since 1950, events have been held around the world. The introduction of sit-ski allowed paraplegics and double above-the-knee amputees to begin skiing and racing.

Downhill was added to the Paralympic program in 1984 in Innsbruck, Austria, and super-G was added in 1994 at Lillehammer, Norway. Sit-skiing was introduced as a demonstration sport at the Innsbruck 1984 Paralympics and became a medal event at the Nagano 1998 Paralympic Games.

The National Sports Center for the Disabled has called Winter Park, Colorado home for nearly 50 years.