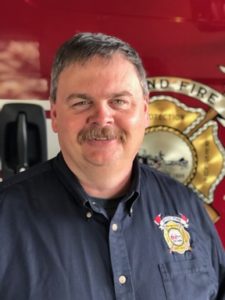 The Board of Directors of Grand Fire Protection District No. 1 is pleased to announce that Brad White accepted the position of Fire Chief/District Administrator at their regular meeting on April 8, 2019. Brad previously served as the Assistant Chief of Operations and Training for four and a half years, and then the Interim Fire Chief from December 2018 to April 2019. Chief White continues to bring new ideas, challenging trainings and a wealth of experience to Grand Fire.

Chief White came to Grand County in the summer of 1989 as a seasonal resident and moved to Grand Lake full time in 1997.  He began his fire career as a volunteer with Hot Sulphur Springs/Parshall Fire Protection District after moving to Hot Sulphur Springs in 2001. He served four years as the Assistant Chief and seven years as the Fire Chief. He was instrumental in several ballot initiatives, station constructions and a district expansion. Brad is a founding member of the Grand County Training Officers Committee which he continues to chair, has held various positions with the Grand County Fire Chiefs Association, and was the Vice Chair of the Colorado State Fire Chiefs Volunteer Section. Brad holds certifications for IFSAC Firefighter II, Hazmat Ops, Fire Instructor, Fire & Life Safety Educator, Colorado State Proctor, NWCG Strike Team Leader and Type 4 Incident Commander, and is working on his Type 3 Incident Commander.  Brad is also a founding member of the Grand County Wildfire Council and sits on several state and regional committees including the Colorado Division of Fire Prevention & Control Wildland Advisory Committee, Craig Interagency Dispatch Advisory Group, Colorado State Fire Chiefs Statewide Mutual Aid Committee, and is on his second term chairing the Colorado State Fire Chiefs Wildland Section. Brad and his wife have a son at Middle Park High School and a daughter at East Grand Middle School. They enjoy many outdoor activities together including whitewater rafting, hunting and fishing.