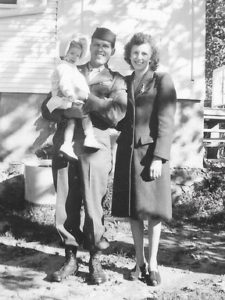 Alfred with his wife and thirteen month old daughter Eileen.

A book called “Alfred: The Quiet History of a World War II Infantryman” will soon be available for online orders.  It documents the tour of duty and unexpected history of the father of Eileen Waldow of Fraser. Alfred was in his eighties before his family knew that he had been a heavy weapons machine gunner during the war.  They had only known him to be a barber, chauffeur, and a German language translator. But following the death of his wife, Alfred quietly started to share a glimpse into his actual experiences. While he served with Patton, Eileen was born, a daughter Alfred never expected to see.  He did return home, discernibly the gentle Wisconsin farmer he was when he left, to a family unknowing what he had done and what he had survived.

Colonel Roger T. Aeschliman (Ret) of the 35th Division writes of the book,”Many warriors who saw the worst of World War II came home to resume a quiet, peaceful life.  Alfred was one of those who tried to leave the horrors behind and as a result, left his family and friends with little knowledge of what he had seen and done. From occasional cracks in his armor, Eileen’s sister  was able to piece together the amazing history of a common man who suffered, endured, and survived to say – in his own way – war is a terrible thing. You will find yourself weeping with reverence and gratitude, touched by the simple statements of true heroism from a quiet hero.” 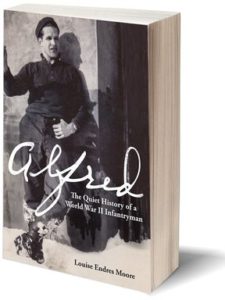 For 57 years, Alfred buried the memories of a war that took so many lives. What began as a weekly napkin-capture of stories during nursing home visits with her dad became a nearly two decade deep dive into his true role in the war as a reluctant front-line machine gunner in Europe 1944-1945. Intensely researched and thoroughly human, Alfred compiles a lifetime panorama of the experiences, emotions, and character of one infantryman who never wanted a part of the war but accepted it.

More info is available at AlfredtheBook.com.