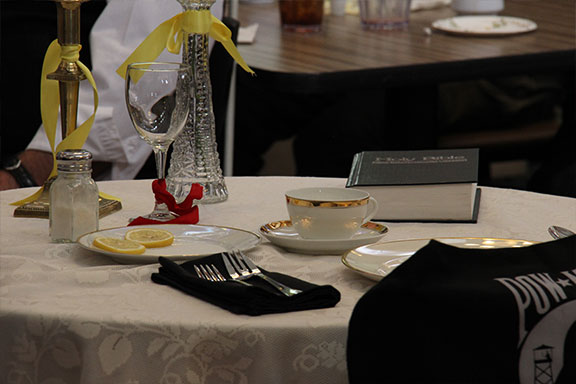 Local Firefighters and Volunteers presented the Grand Flag and welcoming arch at the entry to Snow Mountain Ranch Friday, November 10th Breakfast Social and Ceremony.   Close to 400 people were in attendance for this years local Veterans Day celebration.  Colonel Lee Staab, a 28 year Amry Veteran, currently County Manager was one of the ceremonies keynote speakers.

Staab shared the stage with Duane Dailey and highlighted a theme of past, present and future admiration for all whom served in our country’s history. Staab has a long list of accolades in his career including West Point graduate honors and proud father of four including a West Point graduate.  Staab spoke for 20 minutes and included an inspirational video that underscored the message of honor and dignity held by the armed forces.  He also included words to remember as we go about or daily lives, our foundation of freedom.

Duane Dailey, Grand County Veterans Service Officer, emceed the event and narrated the “Table Cermony” honoring the men and women missing in action. The Table represents a place that is solemnly held for those that have not yet returned from war. Each item on the table is symbolic of the trials of these missing veterans.

This Table ceremony has several forms and is traditionally recognized by veterans organizations accross the nation on National POW/MIA Recognition Day occurring on the third Friday of September each year with the vow to uphold the motto of The National League of Families…”You Are Not Forgotten.”

Dailey commented, “The first formal gathering of Vets in Grand County took place at the El Monte in Granby with approximately 20 in attendance.  In 2002 the event moved to Snow Mountain Ranch  to accommodate the growing veteran populous in the County.   Food and Beverage Director Joe Lavato spoke briefly thanking all the families and veterans for their service.. Lavoto said, “It is an honor to host this breakfast event, it gets better each year”

The Granby Elementary Choir performed a medley of songs from “My Country tis a thee” to a bluegrass favorite “Shady Grove”. The elementary students were a crowd favorite.  After the performance music teacher, Laura “Mrs V” Verlado was awarded a special Grand County medallion, bestowed upon only a few residents. The medallion comes with special stipulations.  You will have to ask her or others awarded the coin about the details of this honorary society. Local musician and Nashville Recording artist, Peggy Mann performed the National Anthem and closed with an emotional song she wrote as tribute.

The VA estimates there were 22 million military veterans in the U.S. population in 2015. The cenus survey also states that 7.3 percent of all living Americans have served in the military at some point in their lives.

Dailey provided some interesting numbers after the event; The US census estimates 1320 vets live or own homes in Grand County. In addition to the findings, Grand County is about 60% second home owners with a high percentage that are “undocumented” here due to primary residence else where.  The surveys lead to a belief that Grand County has one of the highest number of veterans per capita in the state (according to the Colo. Division of Veterans Affairs).

All local and sojourning veterans of the US military are encouraged to contact Duane Dailey to register with the Grand County Veterans Service Office. Duane Dailey is a nationally accredited veterans service officer certified by the Colorado Division of Veterans Affairs.

Home of the Free because of the Brave!