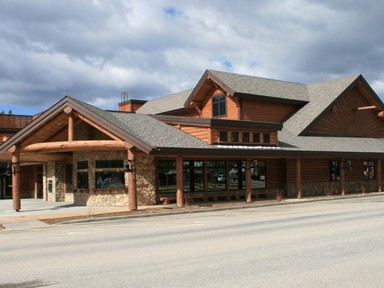 The 2019 summer season has been one for the record books at Rocky Mountain Repertory Theatre, but all good things must come to an end. There are only a handful of performances left for the summer season, so if you wanted to catch a show, now is the time to make it happen!

‘Sister Act’ is based on the 1992 movie of the same name. Deloris Van Cartier sees her boyfriend and his crew shoot someone he believes “squealed” on them. She heads to the police station and tells them what she saw and they put her into a witness protection program at a convent, where they are certain he’ll never find her. Used to smoking and drinking, Deloris faces challenges with her new surroundings, but as a singer, she finds her place leading the choir. The choir gains popularity, bringing unwanted attention to the nontraditional choir and hilarity ensues. The final two performances are Wednesday, August 21 at 7:30 pm and Saturday, August 24 at 8 pm.

The musical comedy ‘Disaster!’ is a parody of 1970’s disaster movies. The show is set in 1979 Manhattan during the opening night of the Barracuda, the first floating casino and discotheque in New York City. The characters gather to gamble and dance, unaware of the building’s lack of safety measures which lead to catastrophe. The show features 39 songs from the era, including I will survive, 25 or 6 to 4, Hot Stuff and I’m still standing. The final two performances are Monday, August 19 at 6 pm and Thursday, August 22 at 7:30 pm.

The Stephen Sondheim musical, ‘Sweeney Todd, the Demon Barber of Fleet Street’ tells the story of Todd, a barber and serial killer who, with the help of the widow, Mrs. Lovett, disposes of the bodies by turning them into meat pies. “This is a stunning, epic musical thriller and the plot will shock you to the core”, said artistic director, Michael Querio. The show does feature theatrical violence and is not intended for younger viewers. The final two performances are Tuesday, August 20 at 7:30 pm and Friday, August 23 at 8 pm.

After a short, 5-day break following the summer show close, the theatre’s fall production of ‘Always… Patsy Cline’ hits the stage on August 30th and runs through the end of September. More than a tribute to the legendary singer who died tragically at age 30, it is the story of Cline’s friendship with a fan, Louise Seger, who met Cline at a Texas honky-tonk in 1961 and corresponded with her until her untimely death. Inspired by Cline’s letters to Seger, which were always signed “Love always… Patsy Cline”, the show features 27 Patsy Cline hits including Crazy, I fall to pieces, Sweet Dreams and Walking after Midnight.

Tickets are available at rockymountainrep.com.