Photo: Grand County Bowling Association Board Members joining Mike for the photo op is he is presented with a check for $300 and a ring commemorating the Perfect Game. From L > R: Chris Baer, Motor Coulson, Francie de Vos, Christy Horn, and Mike Brannagan.    Photo by Michael Turner

On November 19, 2019, with an average score of 197, Mike Brannagan bowled the first ‘Perfect Game’ during sanctioned league play at The Foundry Cinema and Bowl in Fraser. A perfect game is the highest score possible in a game of bowling, achieved by scoring a strike in every frame. That is 12 strikes in a row, one strike in each of the first nine frames, and three more in the tenth frame with a score of 300 points in 10 pin bowling. Mike rolled a 236, a 300 and a 247 for a 783 series that evening and said, “When I got to the tenth frame I realized everyone was watching.” Brannagan recalled the nervous tension in the air, “I just kept my head down and said to myself, ‘just relax and bowl, no big deal’.”

According to mathematicians, the odds of any adult male bowling a 300 game are 11,500 to one. The odds of a professional PBA bowler rolling a perfect game are 460 to 1. A handful of 300 games have been broadcast on live TV. Grazio Castellano of Brooklyn, New York was the first to roll a 300 game on live television in 1953, and, according to Wikipedia, only 27 professional bowlers have accomplished a Perfect Game on live television at this point.

Mike grew up Grand Island, Nebraska and started bowling in a youth league at age 8. He  moved to Grand County in 1993 and has been bowling off and on throughout his life. Mike joined the local men’s league as a sub and started full-time 5 years ago—just for the record he is using the same ball he has had since college, 33 years ago! “I was thinking about retiring my ball but decided to keep rolling it for now.”

Teammates and witnesses said the place exploded with applause and a hearty round of high-fives when the final pin fell. Brannagan said, “On the last ball I hit my mark a little wide and thought I had missed it, and when it finally moved on the pins I was relieved.” Spectators and teammates said you could feel the tension in the air. Brannagan said, “You don’t realize the pressure till frame 9 and 10, and I just tried to remain calm and stay consistent.”

In recognition of his accomplishments, Mike is receiving a coveted “300 Ring” from the United States Bowling Congress, a $300 check and next season’s bowling fees, as well as a commemorative certificate from his local association. Grand County Bowling Association Board President Christy Horn presented the ring, certificate and money at Tuesday’s Mens League Night.

The Foundry Cinema & Bowl opened in 2012 and is currently managed by the Fraser Valley Metropolitan Recreation District. With men’s league now in their 8th season with 40 weekly participants, there have been approximately 3,600 men’s league games bowled before Mike rolled the first perfect game at The Foundry.

Grand County USBC Bowling Association, a local non-profit (bowling) association formed in 1952, is one of the oldest nonprofits in Grand County. With just over 100 members bowling in the local association, there is a significant level of participation in regional, state and national competitions. Every spring, about 20% of the local bowlers attend the State Open Tournament and nearly that many of the local ladies travel annually to the State Women’s and National Championships.

Bowling is a great way to get acquainted in the community and the leagues always welcome new members as well as substitute bowlers. Contact leagues through the FV Rec District, The Foundry or their Facebook page. Don’t worry about “being good enough to join a league”—all ability levels enjoy participating and coaching opportunities are also available! 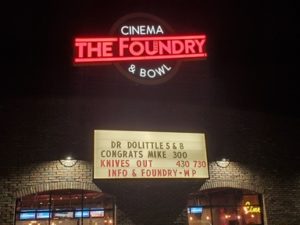 Thank you to Francie de Vos for her contributions to this article.